Vinnie Miller picked up the 2nd last-place finish of his NASCAR XFINITY Series career in the Drydene 200 Race 2 at the Dover International Speedway when his #78 GlassSkinz Chevrolet was involved in a two-car accident after 11 of 200 laps.

The finish, which came in Miller’s 87th series start, was his first of the season and first since November 17, 2018 at Homestead, 54 races ago. In the XFINITY Series’ last-place history, it was the 7th for the #78, the 334th from a crash, and the 553rd for Chevrolet. Across NASCAR’s top three series, it was the 36th for the #78, the 1,220th from a crash, and the 1,736th for Chevrolet.
Following point finishes of 27th and 23rd in his first two full-time XFINITY seasons the last two years, Miller has run all but one race in the series this year, excepting only the Daytona infield road course just last week, where road course competitors Scott Heckert and Josh Bilicki joined teammate Matt Mills at the B.J. McLeod Motorsports effort. Miller enjoyed a solid start to the year, finishing 14th in the Daytona opener, 15th two rounds later in Fontana, and a season-best 12th in the seventh round in Bristol. But coming into Dover, he’d scored just one top-twenty finish since.
At Dover, Miller welcomed his first new primary sponsor since the start of the season as GlassSkinz.com backed his #78 for both races in Dover. The GlassSkinz company sells stylish rear window skins for current-model sports cars, including the production version of the Camaro like the one his #78 was modeled after. After finishing 28th, four laps down, in Saturday’s first round of the double-header, Miller would start 29th in the Sunday race.
Miller would also incur a tail-end penalty for unapproved adjustments, which would also drop to the rear 18th-place Alex Labbe in the #90 Prolon / VRVictoriaVille.com Chevrolet and Jeffrey Earnhardt in the #0 Drydene Chevrolet. Daniel Hemric, set to start 9th, would drop to the back after taking the place of Saturday’s driver Jeb Burton along with his sponsor in the #8 Poppy Bank Chevrolet while 6th-place Chase Briscoe in the #98 Highpoint.com Ford was docked for running the only backup car.
These penalized drivers shuffled the lineup for the tail end of the field, where Saturday’s last-place finisher Timmy Hill was set to start 36th in the #66 Jani-King Toyota. Not dropping to the rear was 5th-place Anthony Alfredo, who discovered a power steering issue during the pace laps on the #21 ADS / Footing First Chevrolet.
On Lap 4, Miller climbed to 32nd, dropping Korbin Forrister to last in the #36 Nursing Home Heroes Chevrolet. On Lap 7, Miller climbed to 30th and was reeling in 29th-place Jeffrey Earnhardt. Two laps later, he completed the pass, but Earnhardt continued to contest the position. On Lap 11, the two were side-by-side off the second corner when Miller crossed Earnhardt’s nose, slamming the #78 hard into the outside wall. Miller rolled down the backstretch with heavy right-front damage before the right-front tire failed, putting him into the Turn 3 wall. The caution fell for the accident as Miller reached the stripe, debris from his fender still in Turn 3. He pulled behind the wall, done for the day. Miller promptly took last from teammate Matt Mills, whose J.F. Electric Chevrolet was still on the lead lap in last place on Lap 10.
The 35th spot fell to Kyle Weatherman, who cited suspension issues on the #47 Thin Blue Line USA Chevrolet. As of this writing, the Mike Harmon Racing team is still trying to recover the truck, hauler, and Weatherman’s road course car that were stolen from a parking lot following last week’s race in Daytona. With the help of several partners, the initial $5,000 reward has increased to $20,100. Bayley Currey, Weatherman’s teammate in the #74 Chevrolet, finished 33rd with engine trouble.
Timmy Hill took 34th, though he nearly returned to the track after Jeffrey Earnhardt’s damaged car hit the wall when they were in the garage. As Earnhardt kept rolling, the Motorsports Business Management crew elected to pull out of the race. Completing the Bottom Five was Korbin Forrister, who dropped out with brake issues after briefly holding last place in the early laps.
Coming home an impressive 10th was Brett Moffitt in Our Motorsports’ #02 Robert B. Our, Inc. Chevrolet. Moffitt, who ran a “throwback” scheme honoring Jimmie Johnson and his “red vest” Lowe’s paint job, inherited the pole after the field inversion from Saturday. He led the opening 24 laps, then once more, appropriately, on Lap 48. These were the first laps led by the #02 this season, and was Moffitt’s fifth top-ten run in 2020.
LASTCAR STATISTICS
*This marked the first XFINITY last-place finish for the #78 since September 28, 2019, when J.J. Yeley’s run in the BringYourBible.org Toyota ended after 5 laps with a crash during the Drive for the Cure 250 on the Charlotte “Roval.”
*The number hadn’t finished last in an XFINITY race at Dover since May 30, 1998, when Loy Allen, Jr. scored his first series last-place finish due to rear end trouble on his Mark III Financial Chevrolet after 18 laps of the MBNA Platinum 200. This also happened to be the first last-place run for the #78 in series history.
THE BOTTOM FIVE
36) #78-Vinnie Miller / 11 laps / crash
35) #47-Kyle Weatherman / 23 laps / suspension
34) #66-Timmy Hill / 59 laps / overheating
33) #74-Bayley Currey / 106 laps / engine
32) #36-Korbin Forrister / 167 laps / brakes
2020 LASTCAR XFINITY SERIES OWNER'S CHAMPIONSHIP
1st) Motorsports Business Management (5)
2nd) Joe Gibbs Racing (3)
3rd) JD Motorsports, Jimmy Means Racing, Mike Harmon Racing, Shepherd Racing Ventures (2)
4th) B.J. McLeod Motorsports, Jeremy Clements Racing, JR Motorsports, Kaulig Racing, SS-Green Light Racing (1)
2020 LASTCAR XFINITY SERIES MANUFACTURER'S CHAMPIONSHIP
1st) Chevrolet (13)
2nd) Toyota (8)
2020 LASTCAR XFINITY SERIES DRIVER'S CHAMPIONSHIP 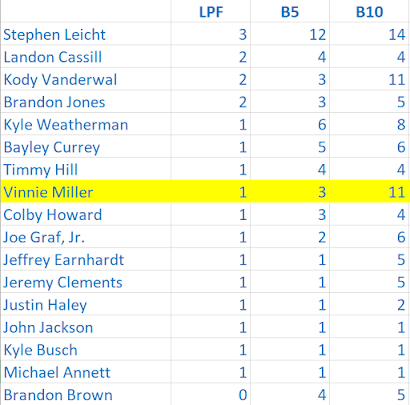