Timmy Hill picked up the 3rd last-place finish of his NASCAR XFINITY Series career in Saturday’s Drydene 200 Race 1 at the Dover International Speedway when his #66 Jani-King Toyota fell out with a vibration after 55 of 200 laps.
The finish, which came in Hill’s 202nd series start, was his first of the season and first in the series since October 15, 2016, 122 races ago. In the XFINITY Series last-place rankings, it was the 11th for the #66, the 140th for Toyota, and the 140th from a vibration. Across NASCAR’s top three series, it was the 75th for the #66, the 214th for vibration, and the 342nd for Toyota.
Dover proved to be one of the most challenging weekends for Hill as he’d enter all five combined Cup, XFINITY, and Truck Series races held on three consecutive days. He’d also start the weekend as both owner and driver while competing against his brother Tyler Hill. Timmy drove his family’s #56 Chevrolet while Tyler took the place of Ray Ciccarelli in his #49 Back the Blue Chevrolet. Timmy prevailed in the race, taking 21st over Tyler in 30th.
Timmy would continue to race for Carl Long’s team Motorsports Business Management in both Cup and XFINITY. On the XFINITY side, where he hadn’t finished last since back-to-back races in 2016, he had driven all three of Long’s cars this season with a season-best 3rd in the season opener at Daytona, driving the #66, an 8th at Pocono and 14th at Bristol in the #61, and a 19th in his one-off in the #13 at the Indianapolis Grand Prix Circuit. Dover would mark his first time in the #66 XFINITY car since Charlotte in May, and he’d share sponsorship from Jani-King with teammate Stephen Leicht in the #61.
Hill drew the 36th and final starting spot, but had radio issues on pit road as the crew couldn’t hear the driver’s voice. Sitting 25th on pit road, Matt Mills also had radio trouble on the #5 J.F. Electric Chevrolet, and was about to be pushed to his pit stall before the crew raised the window net. Mills and Hill joined the field along with Korbin Forrister, whose #36 Nursing Home Heroes Chevrolet needed a push off pit road. Forrister ultimately dropped to the rear along with 33rd-place Colby Howard, whose team made unapproved adjustments to the #15 Project Hope Foundation Chevrolet.
When the race started, Howard and Forrister were about five seconds back of the lead, but weren’t racing for last place. That spot fell to Mills, who missed the start due to additional issues on the #5. “When I turn the wheel, it keeps undoing the belts,” said Mills on Lap 3. He finally pulled onto the track on Lap 11, but was furious on the radio. According to the driver, something was dangling from the roof of the car, blocking his view of the track and touching the steering wheel, and at least one pair of vice grips was left on the floor of the cockpit. “I don't know if we're meeting minimum speed because I can't see the goddamned race track,” shouted Mills.
On Lap 23, Mills returned to pit road, but missed the garage entrance. He was behind the wall by Lap 26, when NASCAR confirmed he’d pulled alongside the infield care center. At the time, he’d completed just nine laps. He didn’t return to action until Lap 42, when he was now 34 laps down. This time, he was told not to blend into traffic, and instead run the apron as he waited for the end of Stage 1. By then, Mills also reported his tachometer had stopped working. While a pit road speeding penalty was expected, he instead incurred a tail-end penalty for the crew coming over the wall too soon on Lap 49.
Hill didn’t enter the last-place battle until Lap 60, when NASCAR reported the #66 was behind the wall with a mechanical issue. At the time, he was listed five laps down, and Mills had nearly 30 laps to close the gap. On Lap 69, NASCAR reported Hill was out with a vibration, and Mills now had just 22 laps to catch and pass him. On Lap 92, under the caution to end the second stage, Mills finally caught and passed Hill, putting the #66 in last place. Mills only gained two more spots before taking the checkers in 33rd, 39 laps down.
Taking the 35th spot was Bayley Currey, whose #74 Mutt & Jeff Porkskins Chevrolet lost fuel pressure. B.J. McLeod took 34th after his #6 Drydene Chevrolet suddenly slowed in the high lane of Turn 4 on Lap 150, then pulled into the garage area entering Turn 3. Suspension issues were the listed cause of McLeod’s issue. Rounding out the Bottom Five in front of Mills was Korbin Forrister, who finished nine laps down.
Brandon Brown finished just 14th in his #68 Jabs Construction Chevrolet, but turned heads with some pit strategy that gave him the lead on Lap 93. Brown led four laps under caution, and while Justin Allgaier took the lead on the restart, he hung on to a Top 10 spot well past Lap 127. Most critically, the run kept him 27 points ahead of 13th-place points man Jeremy Clements, who finished one spot ahead of Brown in 13th.
LASTCAR STATISTICS
*This marks the first last-place finish for the #66 in an XFINITY Series race at Dover.
THE BOTTOM FIVE
36) #66-Timmy Hill / 55 laps / vibration
35) #74-Bayley Currey / 92 laps / fuel pressure
34) #6-B.J. McLeod / 146 laps / suspension
33) #5-Matt Mills / 154 laps / running
32) #36-Korbin Forrister / 185 laps / running
2020 LASTCAR XFINITY SERIES OWNER'S CHAMPIONSHIP
1st) Motorsports Business Management (5)
2nd) Joe Gibbs Racing (3)
3rd) JD Motorsports, Jimmy Means Racing, Mike Harmon Racing, Shepherd Racing Ventures (2)
4th) Jeremy Clements Racing, JR Motorsports, Kaulig Racing, SS-Green Light Racing (1)
2020 LASTCAR XFINITY SERIES MANUFACTURER'S CHAMPIONSHIP
1st) Chevrolet (12)
2nd) Toyota (8)
2020 LASTCAR XFINITY SERIES DRIVER'S CHAMPIONSHIP 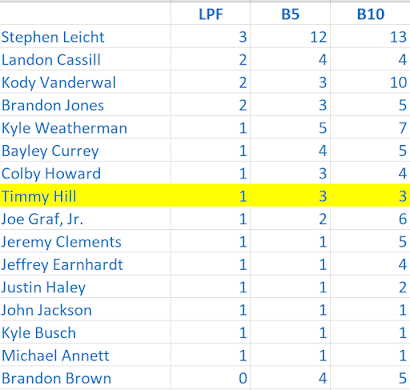