XFINITY: Bayley Currey just the second driver to break down on the opening lap at Road America

Bayley Currey picked up the 2nd last-place finish of his NASCAR XFINITY Series career in Saturday’s Henry 180 at Road America when his #74 Repairables.com Chevrolet fell out with engine issues without completing any of the 45 laps.
The finish, which occurred in Currey’s 38th series start, was his first of the season and first since March 9, 2019 at Phoenix, 47 races ago. In the XFINITY Series’ last-place history, it was the 11th for the #74, the 264th for engine trouble, and the 551st for Chevrolet. Across NASCAR’s top three series, it was the 51st for the #74, the 1,091st for engine trouble, and the 1,729th for Chevrolet.

The noticeable improvement of Mike Harmon Racing this year has been just as attributable to Bayley Currey as it has been to his teammate, Kyle Weatherman. Before Weatherman gave MHR their first Top 10 at Kentucky, it was Currey who broke through with a streak of three consecutive top-twenty finishes: Charlotte, where he took 18th, followed by a 20th at Bristol and 18th in Atlanta. He also earned a stage point in the second round of the Homestead double-header, battling his teammate to take the 10th spot at the end of Stage 1. Since the series’ return in May, team owner Mike Harmon has only driven his familiar #74 once – taking 25th at Talladega. Another Top 20 came soon after when Currey steered the car to a 19th-place finish.

For Road America, Currey and Weatherman would again run their identical Repairables.com Chevrolets they debuted at the Indianapolis Grand Prix Circuit, a red-white-and-blue scheme in place of the MHR team’s traditional black. The cars which also carried the message “We Stand For The National Anthem” from that Fourth of July event. Currey drew the 25th spot ahead of Weatherman in 32nd.

Taking the 37th and final spot was Preston Pardus, who looked to follow-up his own strong run at Indianapolis which netted him 10th, his first career top-ten finish in only three series starts. Pardus’ #36 Chinchor Electric / Danus Chevrolet only spent a brief moment in the spot as, prior to the start, two others were docked for pre-race penalties: Vinnie Miller, who took the place of teammate Matt Mills in the 34th-place #5 Thompson Electric / JF Electric Chevrolet, and 29th-place Myatt Snider for unapproved adjustments on his #93 Shore Lunch Chevrolet. Two Motorsports Business Management cars also dropped back voluntarily: 31st-place Chad Finchum in the #66 OCR Gaz Bar Toyota (the former LeithCars.com Supra run previously on the Charlotte “Roval”), and 35th-place Jesse Iwuji, making his series debut in the #13 G2 Xchange Toyota. There was also some delay for 26th-place Joe Graf, Jr. getting off pit road in the #08 Bucked Up Energy Chevrolet, but he did not drop to the rear for the start.

Just prior to the start, however, 13th-place starter Brandon Brown stalled his unsponsored black-and-white #68 Chevrolet and had to be pushed back to pit road. The crew set to work under the left side of the car and just barely managed to get him back out around 15 seconds after the green flag. At that moment, Iwuji had been the last car to cross the stripe, and moved to 36th as he passed Brown on the main straightaway, 9.043 seconds back of the lead. Scott Heckert soon had trouble on his #78 Koolbox Ice / JW Transport Toyota, and NASCAR noted he was off the pace. By the time the field entered Turn 13, however, trouble found Currey.

The first report by NASCAR was to watch the #74 for smoke, but soon the car pulled off to the side of the road with more smoke billowing from beneath the hood. The caution fell on Lap 2, just as Currey became the first driver to lose a lap. When combined with Brown and Heckert’s issues on the same lap, timing and scoring was briefly confused, first putting Heckert in the spot before Currey. Heckert, like Brown, was guided back to the pits, and would return to action. He ultimately drew the next-to-last caution when he spun and stalled himself on Lap 41, though his car was much further off the racing surface than Currey.

Currey ultimately didn’t return to action after a lightning delay just a few laps later pushed the race well past its advertised timeframe. Chad Finchum, who had dropped to the rear in the MBM #66, only made it five laps before citing transmission issues. His two teammates fared much better. Just as he had at the Indianapolis Grand Prix Circuit, Stephen Liecht earned a respectable run in the #61 Jani-King Toyota - he finished 22nd, just one spot short of his 21st at Indy. Jesse Iwuji took 26th in his series debut, the last car on the lead lap.

The rest of the Bottom Five was filled by mechanical issues. Daniel Hemric made seven laps in the #8 Poppy Bank Chevrolet before the engine let go on the main straightaway, his car stopped just past pit entrance. A lengthy clean-up was required to prepare the track surface. Vinnie Miller’s replacement run in the #5 only lasted three more laps before his own engine let go in a large plume of smoke. Heckert rounded out the Bottom Five after his late-race spin.

It was Hemric’s engine failure that put Brandon Brown back on the lead lap, allowing him to recover nicely to finish in 12th spot, just one of a number of surprising runs:

Andy Lally made a dramatic return to the XFINITY Series on Saturday, finishing 5th in his first series start since 2018, tying his career-best at Mid-Ohio three years ago. Lally drove a throwback paint scheme to Mark Martin’s Apache Stove Pontiac from the early 1980s as it shared the same #02 as the Chris Our team he raced for. New Wave Cleaning Solutions was on board for the run. Lally will certainly be one to watch next week at the Daytona Infield Road Course, where he has extensive experience in sports cars.

Josh Bilicki, who also has an extensive background in road racing, enjoyed a career run on Saturday despite just a 17th-place finish. Bilicki led four laps in B.J. McLeod’s #99 Ariens “Built in Wisconsin” Toyota, during which he enjoyed a spirited battle with Preston Pardus. Bilicki was still running 6th with three laps to go, but dropped back in the final stages. For Bilicki, himself a Wisconsin native, this tied his second-best series finish, and only trails his career-best run of 12th at this same track three years ago.

Preston Pardus himself continued to impress in just his fourth series start, building on his career-best 10th at the Indianapolis Grand Prix Circuit with a new career-best 8th-place finish on Saturday – all the more impressive because his #36 started in last place. After his aforementioned battle with Bilicki from Laps 15 through 19, he again took the lead with five laps to go, bringing his laps led total to five, one more than Bilicki. It was on Pardus that Austin Cindric made the winning pass, though Pardus was able to hold off Ryan Sieg and Michael Annett for his final position. 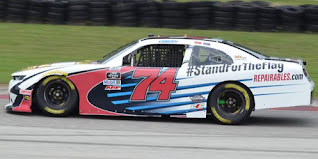 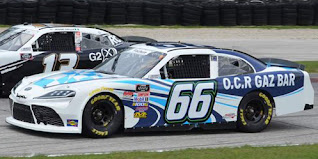 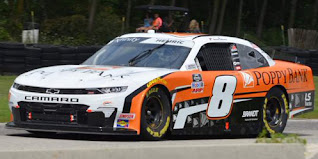 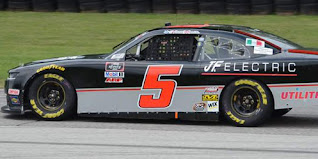 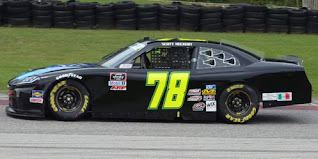 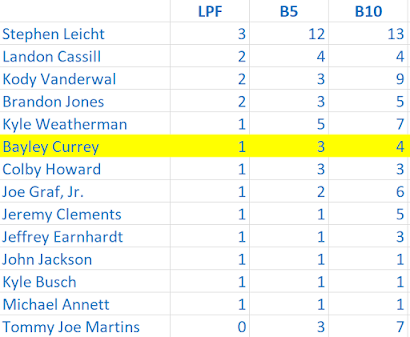