Norm Benning picked up the 16th last-place finish of his NASCAR Gander Outdoor & RV Truck Series career in Friday’s KDI Office Technology 200 at the Dover International Speedway when his #6 H&H Transport Chevrolet fell out with brake issues after 56 of 200 laps.
The finish, which came in Benning’s 223rd series start, was his second of the season and first since Kentucky, six races ago. In the Truck Series’ last-place history, it was the 15th for the #6, the 26th from brake issues, and the 391st for Chevrolet. Across NASCAR’s top three series, it was the 63rd for the #6, the 162nd for brake issues, and the 1,734th for Chevrolet.
The finish gave Benning the overall lead in the 2020 LASTCAR Truck Series Championship standings and extends his all-time record for most last-place finishes in the Truck Series. He now leads runner-up Johnny Chapman by two finishes.
Coming into the Dover race, the popular underdog bounced back from four DNFs in his first five starts to finish under power in three consecutive races. The turning point came in the second round of the Kansas double-header, where he engaged in a spirited battle with fellow owner-driver Ray Ciccarelli. What began as a race for last place in Stage 2 later became a race for 24th, with Ciccarelli taking the spot by one lap.
Benning’s season-best 25th in Kansas was followed by a 31st-place run on the Michigan oval, then a recovery from a spin on the Daytona infield road course to take 27th. Benning endured through the Florida heat that day, an effort made more difficult after he lost the straw for the drink the crew handed him late in the race.
The improved performance helped Benning’s metric for qualifying as he drew the 27th spot in a field of 35, a list reduced from 36 after the withdrawal of Dauzat’s ride with FDNY Racing.
Drawing the final spot on the grid was Dawson Cram, who after reporting he had parted ways with Boyd Long elected to make one final start in the #55 Chevrolet for the Dover race. The only driver sent to the rear to join him was Tate Fogleman, who pitted his #02 Solid Rock Carriers Chevrolet from the 18th spot before the start of the race. Benning also appeared to drop back from his 27th spot at the start, and had taken last from Fogleman by the time FS1 first showed the final position on Lap 5. At that moment, Benning was 16.99 seconds back of the lead, and nearly two full seconds behind Tim Viens in the #83 Trump 2020 Patriotic Chevrolet. Viens’ truck needed a paint scheme adjustment as NASCAR took issue with the roof numbers.
On Lap 7, Fogleman spun out of the 28th spot in Turn 4, drawing the first caution. Fogleman avoided contact with the wall, but took last from Benning, who had dropped more than 20 seconds back of the lead at the time. Fogleman lost a lap in the process, and remained last on the restart. With 16 laps to go in Stage 1, Fogleman had lost a second lap, and Benning his first, the #6 now running 34th. With three to go, GMS Racing teammates Tyler Ankrum and Zane Smith were seen speeding past Benning in the high lane, and Benning soon pulled low on the frontstretch to let more of the faster traffic by.
On Lap 60, just after he was lapped once again by Chandler Smith, Benning reported his tires were “terrible,” and the crew informed him that NASCAR said his #6 was running too slow. While radio communications seemed to indicate he’d try to come back out, the team’s day was done.
Finishing 34th was Parker Kligerman, who lost the engine on the #75 Food Country USA Chevrolet after 94 laps. Bryant Barnhill took 33rd in his return to the Reaume Brothers team, eliminated by ignition failure on the #33 Crowe Equipment Toyota. Clay Greenfield struggled to keep pace along with Benning in the early stages, and ultimately cited suspension as the reason for his exit after 133 laps in the #68 Rackley Roofing Toyota. Tim Viens rounded out the group as the last driver under power, a full 20 laps down to the race leaders.
Making just his fourth series start and his first ever at Dover, Carson Hocevar turned heads with a solid 12th-place finish for Al Niece in the #40 Scott’s / GM Parts Now Chevrolet. The run came just one week after his season-worst finish on the Daytona road course, where a late-race wreck left him 28th.
LASTCAR STATISTICS
*This marked Benning’s second-straight last-place finish in a Truck Series race at Dover. Last year, on May 3, 2019, he was flagged off the track for not maintaining minimum speed.
*Benning is just the second driver to finish last in the Truck Series race at Dover due to brake issues. The first was Camden Murphy on June 2, 2017.
THE BOTTOM FIVE
35) #6-Norm Benning / 56 laps / brakes
34) #75-Parker Kligerman / 94 laps / engine
33) #33-Bryant Barnhill / 109 laps / ignition
32) #68-Clay Greenfield / 133 laps / suspension
31) #83-Tim Viens / 180 laps / running
2020 LASTCAR TRUCK SERIES OWNER'S CHAMPIONSHIP
1st) Reaume Brothers Racing (3)
2nd) Norm Benning Racing (2)
3rd) CMI Motorsports, DGR-Crosley, FDNY Racing, Halmar Friesen Racing, Niece Motorsports, Spencer Davis Motorsports, ThorSport Racing (1)
2020 LASTCAR TRUCK SERIES MANUFACTURER'S CHAMPIONSHIP
1st) Chevrolet (7)
2nd) Ford, Toyota (3)
2020 LASTCAR TRUCK SERIES DRIVER'S CHAMPIONSHIP 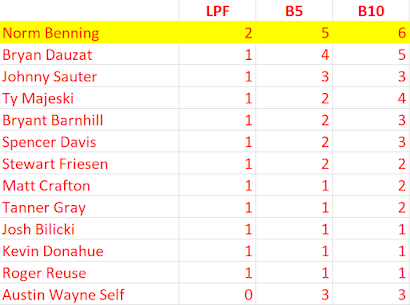