Stewart Friesen picked up the 3rd last-place finish of his NASCAR Gander RV & Outdoors Truck Series career in Friday’s Henry Ford Health System 200 at the Michigan International Speedway when his #52 Halmar “Racing To Beat Hunger” Toyota was eliminated in a multi-truck accident after 49 of 107 laps.

The finish, which came in Friesen’s 82md series start, was his first of the season and first since July 27, 2019 at Pocono, 20 races ago. In the Truck Series’ last-place rankings, it was the 8th for the #52, the 38th for Toyota, and the 158th from a crash. Across NASCAR’s top three series, it was the 59th for the #52, the 341st for Toyota, and the 1,217th from a crash.It’s well-documented how much Friesen has struggled this year after his team switched manufacturers from Chevrolet to Toyota. After making the Championship Four with a win in the penultimate round at Phoenix, the Canadian driver has been well off this season, finishing 21st in Daytona, 30th in Charlotte, 14th in Homestead, and 15th in Kentucky. Texas saw his best run to date with a 4th-place finish, but he still hadn’t led any laps since the season opener, and remained just 13th in points. He entered Michigan after a particularly difficult double-header in Kansas, where he ran just 27th in the first race and 34th after a wreck in the second.

For Michigan, Friesen drew the 21st spot. He would run the same “Racing To Beat Hunger” paint scheme that he’d run since the fourth race of the year in Atlanta.

There were 41 drivers entered for 40 spots, but the field decreased twice by race day. Left on the wrong side of the cut line was David Ragan, who anticipated a short field, but was unable to start in DGR-Crosley’s #17 Select Blinds Ford. As it turned out, one team did withdraw, though well after Ragan was eliminated – Charlotte last-placer Spencer Davis in the #11 Polar Bear Coolers Toyota. When it all shook out, Trey Hutchens drew the 39th and final starting spot as he returned to action in his blue #14 Heintz Brothers Performance Chevrolet.

Hutchens wouldn’t roll off in last place however, as at least three other trucks dropped to the rear for the start: 23rd-place Jesse Iwuji in the #33 G2 Xchange Toyota, 32nd-place Tim Viens in the #49 Trump 2020 Chevrolet, and 36th-place Norm Benning in the #6 H&H Transport Chevrolet. All three were more than four seconds back of the leader when the race started with Benning bringing up the rear. Benning then passed Viens by the end of Lap 1, and the #49 was 7.801 seconds back of the lead.

Hutchens didn’t fall to last until Lap 4, when he tangled with Josh Reaume’s #00 Colonial Countertops Toyota coming off Turn 4. Reaume managed to stay on the lead lap, but Hutchens lost a lap to the leaders trying to back out of the grass. Hutchens made it to pit road for repairs, including strips of tape to seal the seams on his hood, and managed to clear the “Crash Clock” on the restart. He then got his lap back after another caution fell for Christian Eckes’ spin off Turn 2 in the #18 Safelite Toyota.

On Lap 15, with all the trucks back on the lead lap, the last spot changed hands under caution. Spencer Boyd took the spot first due to right-front damage on his #20 M&D Blacktop Chevrolet, followed by Codie Rohrbaugh in the #9 Pray For Joshua Chevrolet due to power steering issues. Rohrbaugh required a second stop on Lap 20 for a suspension adjustment in the right-front and, along with Tim Viens, was among the first to violate NASCAR’s new “Choose Cone” rule. He would continue to trade the last spot with Boyd through Lap 23, when Boyd pitted for left side tires and fuel. “I know it sucks,” said someone on Rohrbaugh’s team. “But we’ve gotta get our trucks in shape. Everything will come to us here.”

The battle between Rohrbaugh and Boyd resumed on the restart with Boyd taking the spot on Lap 25. At the time, Stewart Friesen entered the battle after a pit road penalty of his own. Friesen began to climb through the field as, on Lap 26, Norm Benning resumed his place in last. Iwuji slipped to 38th, and the interval between the two grew from one second to two, when Iwuji passed the damaged Boyd. Benning was told he had no tires until after the end of Stage 2, which may have affected his pace.

Lap 30 saw Raphael Lessard drop to last after an unscheduled green-flag stop for a flat right-rear tire on his #4 SiriusXM Toyota. He held the spot until Lap 37, when Clay Greenfield also cut a tire from running over debris, forcing his #68 Rackley Roofing Toyota two laps down. Greenfield was also struggling with his handling, saying “It’s like a cat, it’s up on its back legs.” Greenfield remained last at the end of Stage 2, but moved ahead of Benning on Lap 47 by choosing the opposite lane of Benning’s #6 for the restart.

Meanwhile, Friesen had climbed back into the Top 10 after his penalty and was in a tight race for position when it all went wrong just short of the starting line. Friesen crossed the nose of the #18 of Christian Eckes, turning his truck into the outside wall. Ryan Truex, Matt Crafton, and Ty Majeski were also involved, but all three managed to return to action along with Eckes. An angry Friesen said NASCAR shouldn’t have thrown the green flag for that run, saying someone was “leaking and smoking” on the track. Eckes’ spotter also communicated to the Friesen team an apology for their incident.

Finishing 38th was Chandler Smith, who completed a frustrating afternoon for Kyle Busch Motorsports when his #51 JBL Toyota was turned into the outside wall by Ben Rhodes, then was spun by him soon after. Austin Wayne Self took 37th in the #22 Go Texan / AM Technical Solutions Chevrolet after he crashed on Lap 72, but still managed to finish under power. Self was unable to climb out of the Bottom Five, however, which was set after late-race accidents involving 36th-place Jeb Burton in the #44 12 Hours Auctions Chevrolet and Brennan Poole, 35th in the #30 Remember Everyone Deployed Toyota.

Zane Smith earned his first career victory, and not far behind him were a pair of impressive runs. David Gravel, who was set to make his Truck Series debut at Eldora before the event was cancelled, ran a strong 10th in GMS Racing’s #24 ChevyGoods.com Chevrolet. Even more impressive was Dawson Cram, who gave team owner Boyd Long his best-ever finish with a 14th in the #55 Long Motorsports Chevrolet. Cram himself nearly bested his own series-best performance of 13th at Martinsville last fall, when he drove for Reaume Brothers Racing. 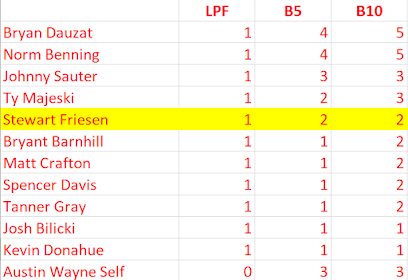