Roger Reuse picked up the 1st last-place finish of his NASCAR Camping World RV & Outdoors Truck Series career in Sunday’s Sunoco 159 at the Daytona International Speedway Road Course when his #49 BELIMO / WCIParts.com Chevrolet did not complete any of the 46 laps due to clutch issues.
The finish came in Reuse’s third series start. In the Truck Series’ last-place rankings, it was the 1st for the #49, the 17th from clutch issues, and the 390th for Chevrolet. Across NASCAR’s top three series, it was the 57th for the #49, the 67th for clutch issues, and the 1,732nd for Chevrolet.
For the last few years, Roger and his younger brother Bobby Reuse have run a handful of road course races in both the XFINITY and Truck Series. We caught up to the pair of them just last year, when they battled against each other at Mosport with Bobby 22nd and Roger 25th.
The pair were set to do battle once again this year, even after the Mosport event was cancelled and moved to the Daytona infield road course. With the help of sponsorship from WCIParts.com, Bobby was to drive in place of Clay Greenfield in the #68 while Roger drove CMI Motorsports’ primary #49. That changed after apparent chassis certification issues for the #68 that led to Bobby’s entry being withdrawn. Bobby then landed his first XFINITY race on Saturday, taking Chad Finchum’s place in the #13 RoofClaim.com Toyota, taking 30th.
With his brother’s 37th-place truck withdrawn, Roger kept the 36th spot in the resulting 38-truck field.
Starting 38th and last in Sunday’s race was Reuse’s teammate Tim Viens in the #83 Trump / Pence 2020 Chevrolet. While no drivers were sent to the rear for pre-race penalties, Reuse had immediate issues. The #49 didn’t start, and the crew had to retrieve him and push him back to pit road. The issue was the clutch, which the driver said kept disengaging and was making “a bad noise.” The crew looked under the hood and ultimately pulled him behind the wall. When the race started, Reuse was shown 29.26 seconds back of the leader and 24.001 back of the now 37th-place Viens. But the #49 never completed a lap and remained last for the duration.
NASCAR’s officials in the garage didn’t officially declare Reuse or any other driver officially out until after the race’s conclusion. Jennifer Jo Cobb, making her 200th Truck Series start, pulled behind the wall on Lap 8 after her brake pedal went to the floor, the crew bleeding the brakes on her #10 Fastener Supply Company Chevrolet. She returned to the track on Lap 11 and, despite some penalties on pit road, ultimately climbed out of the Bottom Five to the 31st spot. Tim Viens, who passed Cobb after her brake issue, made it to 24th.
The 37th-place finisher ended up being Bobby Kennedy, who needed a driver change in his NASCAR debut. Kennedy pulled the #00 Toyota down pit road for team owner Josh Reaume to take his place, but an electrical issue then forced the truck behind the wall. Reaume returned to the race, only to stall short of the entrance of pit road and drop out with ignition failure on Lap 40.
Taking 36th was Mark Smith, making his first start since Eldora last year in the #42 St. Lucie Battery & Tire Chevrolet. Smith spun and stalled to draw the first caution on Lap 11, then ultimately retired on Lap 36 with brake issues. Drivetrain problems left Jordan Anderson 35th in the #3 Lucas Oil / Bommarito.com Chevrolet. And for Spencer Davis, who returned after missing Michigan due to a positive COVID-19 test, his #11 Toyota ended up 34th with brake issues on the 36th circuit after battling for a 10th-place finish in Stage 2.
LASTCAR STATISTICS
*This marked the first time a Truck Series driver finished last due to clutch issues since September 20, 2014, when Ted Minor scored his own first last-place run with first-lap issues on his #57 Norm Benning Racing Chevrolet in the UNOH 175 at New Hampshire.
THE BOTTOM FIVE
38) #49-Roger Reuse / 0 laps / clutch
37) #00-Bobby Kennedy / 15 laps / ignition
36) #42-Mark Smith / 31 laps / brakes
35) #3-Jordan Anderson / 31 laps / drivetrain
34) #11-Spencer Davis / 35 laps / brakes
2020 LASTCAR TRUCK SERIES OWNER'S CHAMPIONSHIP
1st) Reaume Brothers Racing (3)
2nd) CMI Motorsports, DGR-Crosley, FDNY Racing, Halmar Friesen Racing, Niece Motorsports, Norm Benning Racing, Spencer Davis Motorsports, ThorSport Racing (1)
2020 LASTCAR TRUCK SERIES MANUFACTURER'S CHAMPIONSHIP
1st) Chevrolet (6)
2nd) Ford, Toyota (3)
2020 LASTCAR TRUCK SERIES DRIVER'S CHAMPIONSHIP 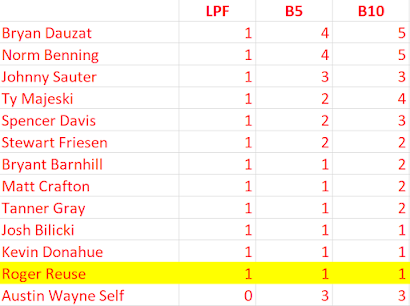 Smith did the race last year at Eldora.

Ah, thank you for the catch.