TRUCKS: Johnny Sauter’s streak of finishing no worse than 4th at Gateway ends in last place


Johnny Sauter picked up the 4th last-place finish of his NASCAR Gander RV & Outdoors Truck Series career in Sunday’s CarShield 200 Presented by CK Power at World Wide Technology Raceway at Gateway when his #13 Vivitar Ford fell out with a vibration after 22 of 160 laps.

One of the series’ most consistent and determined veterans, Johnny Sauter has faced a disappointing and frustrating season in 2020. The disqualification that placed him last in Atlanta dropped him from 2nd to 8th in the point standings, and was soon followed by an engine failure in Texas, then a crash in Kansas. Even 18 laps in the lead in Michigan yielded only a 16th-place finish. While he finished 6th just last week in Dover, he now found himself on the wrong side of the cut line for the Playoffs with three races to go. He hoped for better fortunes at Gateway, where he had yet to win, but had finished no worse than 4th in all seven of his previous starts there.
Sauter drew the 9th starting spot in a field that was originally set to hold 35 entries. That changed twice in the week as All Out Motorsports first withdrew their #7 Toyota without a driver listed. Spencer Davis then withdrew with the #11 Spencer Davis Motorsports team later in the week, their second withdrawal in the last four races.
Rolling off 33rd and last was Roger Reuse, who returned to the Truck Series for the first time since clutch issues kept him from starting the Daytona road course race two weeks ago. He again drove for Ray Ciccarelli in the #49 WCIParts.com Chevrolet. He rolled off to the outside of Norm Benning, who held the inside line in his #6 H&H Transport Chevrolet. Both happened to be the series’ two most recent last-place finishers.
When the race started, Benning pulled ahead of Reuse by 0.610 seconds at the end of Lap 1, but the pair both lost ground to 31st-place Natalie Decker in the #44 N29 Capital Partners Chevrolet, 1.416 seconds ahead Benning. The intervals steadily grew through the first six laps, when Benning dropped 3.012 seconds back of Decker, 17.023 back of the leader. By then, Reuse was over two seconds back of Benning, 19.584 back of the lead. On Lap 11, Reuse was running by himself, 3.414 seconds back of Benning and 31.49 behind the leader when he was soon lapped by Zane Smith. Benning lost a lap the next time by. By Lap 19, both Reuse and Benning were on the verge of losing a second lap.
Sauter didn’t enter the battle until Lap 23, when he made an unscheduled green-flag pit stop. The crew jacked up the driver’s side and looked under the hood, the driver reporting a bad vibration. With Reuse and Benning within just two laps of the leader, this dropped Sauter to last on Lap 26. On Lap 29, the FS1 broadcast revealed an issue with the drivetrain was to blame, much as it had for J.J. Yeley in Saturday’s Cup race. A later report by Sauter himself on Lap 39 indicated the solenoid had come loose, and the truck had a possible broken bell housing.
Finishing 32nd was Christian Eckes, whose #18 Safelite Auto Glass Toyota pulled behind the wall with driveshaft issues stemming from a vibration. Jennifer Jo Cobb took 31st after her #10 Fastener Supply Company Chevrolet smacked the wall off Turn 2. Austin Wayne Self hit the same barrier even harder after contact from Carson Hocevar’s #40 Scott’s Chevrolet sent Self’s #22 Go Texan / AM Technical Solutions Chevrolet into the Turn 1 barrier. Self returned to the track in the final 10 laps and threw a block on Hocevar down the backstretch, but advanced no further than 30th before he was eliminated under the DVP. Benning rounded out the Bottom Five in 29th, 12 laps down.
Before his incident with Self, Hocevar was one of the day’s strong underdog performances. He worked his way up to 9th in the final stages when he suddenly slowed on the backstretch with 29 to go, ultimately leaving him 15th. Finishing one spot behind him was Danny Bohn, making his first start of the season, and the return of On Point Motorsports’ #30 after they team skipped Dover. After starting 29th on the grid, Bohn climbed to 20th by Lap 37, then to 14th inside the final 20 laps.
LASTCAR STATISTICS
*This marked the first last-place finish for the #13 in a Truck Series race at Gateway.
THE BOTTOM FIVE
33) #13-Johnny Sauter / 22 laps / vibration
32) #18-Christian Eckes / 121 laps / driveshaft
31) #10-Jennifer Jo Cobb / 124 laps / crash
30) #22-Austin Wayne Self / 145 laps / dvp
29) #6-Norm Benning / 148 laps / running
2020 LASTCAR TRUCK SERIES OWNER'S CHAMPIONSHIP
1st) Reaume Brothers Racing (3)
2nd) Norm Benning Racing, ThorSport Racing (2)
3rd) CMI Motorsports, DGR-Crosley, FDNY Racing, Halmar Friesen Racing, Niece Motorsports, Spencer Davis Motorsports (1)
2020 LASTCAR TRUCK SERIES MANUFACTURER'S CHAMPIONSHIP
1st) Chevrolet (7)
2nd) Ford (4)
3rd) Toyota (3)
2020 LASTCAR TRUCK SERIES DRIVER'S CHAMPIONSHIP 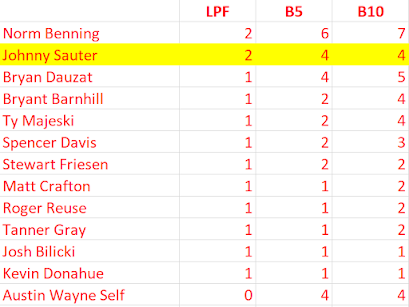