Kyle Busch picked up the 7th last-place finish of his NASCAR Cup Series career in Sunday’s Foxwoods Resort Casino 301 at the New Hampshire Motor Speedway when his #18 Pedigree Toyota fell out in a single-car accident after 15 of 301 laps.
The finish, which came in Busch’s 554th series start, was his first of the year and first since June 12, 2016 at Michigan, 149 races ago. In the Cup Series last-place rankings, it was the 34th for the #18, the 163rd for Toyota, and the 600th from a crash. Across NASCAR’s top three series, it was the 47th for the #18, the 340th for Toyota, and the 1,216th from a crash.
It’s been no secret that the defending series champion has not had the best of luck this season. His year began with a frustrating Daytona, where his championship-themed #18 was destroyed in the Busch Clash, then he lost an engine late in the Daytona 500, extending his winless streak in “The Great American Race.” While his only other DNF in a points race came in the second round of the Pocono double-header, where contact from Ryan Blaney while lapping Garrett Smithley sent him spinning into the inside wall, he’s been noticeably inconsistent. He’s finished runner-up three times at Fontana, Darlington, and Atlanta, and failed to win a stage until just last week in Kansas. With still eight Top Fives on the season, Busch remained inside the Top 16, but still trailed a resurgent Aric Almirola as the highest-ranked winless driver.
Busch drew the 5th starting spot for Sunday’s race.
Rolling off 38th and last was Timmy Hill in the #66 RoofClaim.com Toyota. Hill picked up a bit of extra exposure at the Loudon track, where he was demonstrating the speedway’s mask protocol for the fans in attendance. Around an hour before the start, two teams incurred penalties for improperly mounted ballast: 15th-place Bubba Wallace in the #43 Cash App Chevrolet and 33rd-place Corey LaJoie in the #32 Trump 2020 Ford. Both would lose 10 driver and owner points on top of their tail-end penalty. Also sent to the rear was 23rd-place Austin Dillon for unapproved adjustments on the #3 Freightliner Chevrolet.
With one lap to green, Garrett Smithley also dropped to the rear in the #77 Spire Motorsports Chevrolet, a car backed by Brackett’s Market, who sponsored the lower rear quarter panels. While the penalized LaJoie had the largest interval back of the leader when the race started, it was Smithley who ran in last place at the end of Lap 1.
On Lap 4, Smithley pulled ahead of Joey Gase in the #51 Page Construction Ford. Smithley began to pull away as Gase struggled to find the best line around the track, saying his car had “plenty of forward drive, it just won’t turn in the center.” The team responded, asking Gase to make sure he had all his brake fans on. Around Lap 13, meanwhile, Kyle Busch slid wide off Turn 2 and made light contact with the right-rear of his car. NASCAR Officials watched the #18 for smoke as on Lap 14, the leaders caught Gase to put him one lap down.
Then on Lap 16, Busch’s right-front tire went down and his car went straight into the outside wall, destroying his Toyota. Busch was uninjured and able to drive back to pit road under caution, saying the car “went straight.” He pulled into the garage area without stopping in his pit stall, immediately eliminating him under the Damaged Vehicle Policy. Someone on the crew demanded angrily to see someone from Goodyear about the tire that went down. Busch dropped behind Gase after Lap 17, and Gase earned the Lucky Dog under the Busch caution.
Busch turned out to be the only driver to pull into the garage area for the race’s first half. NASCAR confirmed him out on Lap 37. Around Lap 152, Corey LaJoie pulled behind the wall with an apparent fuel cell issue on his #32. The team ended up spending more than 30 laps on repairs, during which time they also changed tires and filled the car with fuel. During this time, Matt Kenseth spun the #42 Clover Chevrolet off Turn 2 after a tight race with teammate Kurt Busch. When Stage 3 started, Kenseth was then involved in two back-to-back cautions when his right-front tire went down entering Turn 3, putting him into the wall. While the damage still didn’t seem so severe, Kenseth pulled behind the wall after the second misadventure on Lap 204. By then, LaJoie returned to the track on Lap 187 and would ultimately climb to 35th.
The other driver LaJoie passed was John Hunter Nemechek, whose own encounter with the Turn 3 wall was at least as serious as Busch’s. Nemechek’s #38 Citgard Ford locked-up entering the turn on Lap 213 and pounded the wall, destroying his car. He managed to drive back to pit road, but needed a tow behind the wall. All driver involved were apparently uninjured. Joey Gase rounded out the Bottom Five, seven laps down in the #51.
JTG-Daugherty Racing, which last week in Kansas had tied PRISM Motorsports’ 2010 record as the only team to score four consecutive last-place finishes, never threatened in the last-place battle. After starting 30th and 31st, Ricky Stenhouse, Jr. climbed to 14th in his #47 Kroger Chevrolet with Ryan Preece’s #37 Louisiana Hot Sauce Chevrolet in 16th.
THE BOTTOM FIVE
38) #18-Kyle Busch / 15 laps / crash
37) #42-Matt Kenseth / 203 laps / crash
36) #38-John Hunter Nemechek / 212 laps / crash
35) #32-Corey LaJoie / 262 laps / running
34) #51-Joey Gase / 293 laps / running
LASTCAR STATISTICS
*This marked the first time that both Kyle Busch and the #18 have finished last in a Cup Series race at New Hampshire.
2020 LASTCAR CUP SERIES OWNER'S CHAMPIONSHIP
1st) JTG-Daugherty Racing (6)
2nd) Motorsports Business Management (3)
3rd) Hendrick Motorsports, Rick Ware Racing (2)
4th) B.J. McLeod Motorsports, Chip Ganassi Racing, Front Row Motorsports, Joe Gibbs Racing, Leavine Family Racing, Penske Racing, StarCom Racing (1)
2020 LASTCAR CUP SERIES MANUFACTURER'S CHAMPIONSHIP
1st) Chevrolet (13)
2nd) Toyota (5)
3rd) Ford (2)
2020 LASTCAR CUP SERIES DRIVER'S CHAMPIONSHIP 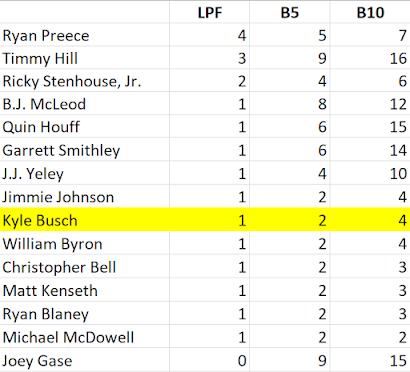