CUP: Joey Gase takes last at Michigan after Davison’s crew fights to get the #51 back on track

Joey Gase picked up the 6th last-place finish of his NASCAR Cup Series career in Saturday’s FireKeepers Casino 400 at the Michigan International Speedway when his #7 Ziegler Auto Chevrolet fell out with transmission issues after 58 of 161 laps.
The finish, which came in Gase’s 62nd series start, was his first of the season and first in the series since March 3, 2019 at Las Vegas, 54 races ago. In the Cup Series’ last-place history, this marked the 41st for the #7, the 80th for transmission, and the 790th for Chevrolet. Across NASCAR’s top three series, it was the 49th for the #7, the 165th for transmission troubles, and the 1,730th for Chevrolet.
The finish also leap-frogged Gase to fourth in the 2020 LASTCAR Cup Series Championship since he was the driver with the most Bottom Fives and Bottom Tens among those without a last-place finish this year.
For the first six seasons of his Cup Series career, Gase has run no more than 11 races each year, putting together part-time deals with underfunded efforts such as Go FAS Racing, BK Racing, Premium Motorsports, StarCom Racing, and Motorsports Business Management. This year, he’s teamed with Rick Ware Racing, with whom he’d made just two Cup starts prior to 2020. This has allowed the Iowa native to run full-time Cup for the first time in his career.
The consecutive start streak would ultimately come to an end at Michigan, however, as he would share a ride for Tommy Baldwin Racing, whose team leases cars from Ware. Gase would only run the first round of the Michigan double-header, handing over the wheel of the #7 to Josh Bilicki for Sunday after Bilicki returned from the XFINITY race in Road America. The black-and-yellow Chevrolet carried several different sponsors, including Wisconsin Lighting Labs, Ziegler Auto, The Boss Builders Outlet Super Store, and Custom Fiberglass Molding.
Gase drew the 39th and final starting spot, and on Saturday incurred a redundant tail-end penalty for unapproved adjustments. Prior to the start, he’d be joined by three other penalized drivers: 17th-place starter Jimmie Johnson failed inspection twice in the #48 Ally Bank Chevrolet, and 13th-place Ryan Newman in the #6 Coca-Cola Ford and 22nd-place Chris Buescher in the #17 Fastenal Ford, teammates at Roush-Fenway Racing, had their rear spoilers confiscated and would also incur 20-point penalties.
Gase took the green flag in last, but immediately zipped past a struggling newcomer in James Davison. Driving Rick Ware Racing’s #51 Signing Day Sports Ford, Davison was making just his fourth series start, and was riding high after Ware backed his upcoming ride for Byrd Racing in the upcoming Indianapolis 500. Unfortunately, his Cup car refused to get up to speed on the start. To make matters worse, the car’s radio button was broken, and the crew couldn’t hear their driver over the radio. After trying to determine if the car lost fuel pressure or electric power, Davison made two pit stops in the first five laps. On the second stop, Davison sat on pit road for nearly ten laps. The crew sent him back out under the competition caution on Lap 15, but the issue still wasn’t fixed. They wanted him to stay out and pit on the second caution lap, but the continued radio issue caused Davison to pit on the first lap, then pull into the garage.
Behind the wall, the Ware crew prioritized the engine issue and attempted to hook their computer up to the car. Unfortunately, the computer they had didn’t connect properly, so they ended up removing the ECU and taking it to the trailer so it could be hooked up to another computer. Another crewman found a replacement radio button, and on Lap 47 Davison could be heard on the radio for the first time. The engine fired the next time by, and the #51 rejoined the race 45 laps down. This didn’t last long, however, as Davison said the engine cut off when he hit 6500rpm in fourth gear. He also said the car was running hot, holding 265 degrees on the water. On Lap 49, he was back in the garage. Repairs took less time and he returned to action on Lap 59. Only then, when he was a full 55 laps down, did Davison say the car was running better.
On Lap 62, as Davison was back up to speed, Gase pulled behind the wall, and the radio was silent. On Lap 74, NASCAR reported Gase was out with what sounded like “communication” issues, though this was actually “transmission.” Davison managed to close the nearly 40-lap gap on Gase and finally dropped the #7 to last on Lap 116. Davison advanced no further and took 38th at the checkered flag.
Finishing 37th was Brennan Poole, who suffered late-race engine troubles on his #15 Rick Ware Racing Chevrolet. He was followed two laps later by John Hunter Nemechek, who was enduring a miserable afternoon in the #38 Death Wish Coffee Ford. Nemechek was involved in three consecutive cautions, starting with a spin off the nose of Chris Buescher’s Ford and ending with a crash in Turn 3. Garrett Smithley rounded out the Bottom Five in still another Rick Ware Racing entry, the #53 sponsored by Victory Lane Quick Oil Change and Kendall Oil.
LASTCAR STATISTICS
*This marked the first time the #7 finished last in a Cup Series race at Michigan. The only single-digit numbers to never finish last in a Cup race there are the #1 and the #3.
THE BOTTOM FIVE
39) #7-Joey Gase / 58 laps / transmission
38) #51-James Davison / 103 laps / running
37) #15-Brennan Poole / 125 laps / engine
36) #38-John Hunter Nemechek / 127 laps / crash
35) #53-Garrett Smithley / 141 laps / steering
2020 LASTCAR CUP SERIES OWNER'S CHAMPIONSHIP
1st) JTG-Daugherty Racing (6)
2nd) Motorsports Business Management (3)
3rd) Hendrick Motorsports, Rick Ware Racing (2)
4th) B.J. McLeod Motorsports, Chip Ganassi Racing, Front Row Motorsports, Joe Gibbs Racing, Leavine Family Racing, Penske Racing, StarCom Racing, Tommy Baldwin Racing (1)
2020 LASTCAR CUP SERIES MANUFACTURER'S CHAMPIONSHIP
1st) Chevrolet (14)
2nd) Toyota (5)
3rd) Ford (2)
2020 LASTCAR CUP SERIES DRIVER'S CHAMPIONSHIP 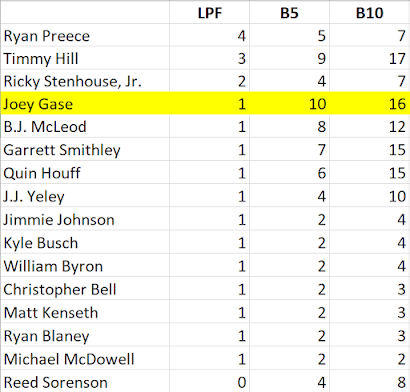