J.J. Yeley picked up 18th last-place finish of his NASCAR Cup Series career in Saturday’s Coke Zero Sugar 400 at the Daytona International Speedway when his #27 America Strong Chevrolet fell out with engine trouble after 3 of 164 laps.

The finish, which came in Yeley’s 316th series start, was his second of the season and first since Homestead, 14 races ago. In the Cup Series’ last-place rankings, it was the 28th for the #27, the 696th from engine trouble, and the 793rd for Chevrolet. Across NASCAR’s top three series, it was the 54th for the #27, the 1,092nd for engine trouble, and the 1,738th for Chevrolet.
Between these two particular last-place finishes, Yeley has shown marked improvement with the Rick Ware Racing team, pulling the organization from outside the Top 30 to inside of it. The next four consecutive races after Homestead showed him climb from 36th at Talladega to 31st and 28th at Pocono, then a season-best 21st at Indianapolis. After a 30th-place run in Kentucky, he then finished 29th or better in the next five races, including a 24th in Texas and a 22nd in Kansas.
The Texas and Kansas finishes came with little to no backing on Ware’s white #27 Ford, and soon attracted sponsorship to his team. Two weeks ago in the inaugural Daytona infield road course, Motorsport Games and the NASCAR Heat 5 video game backed his effort. Yeley was running near the rear when heat exhaustion forced him behind the wall, handing the wheel to Bayley Currey. Thriv5, a supplement company, joined the Yeley effort for the Dover double-header, where he ran 31st and 28th.
The momentum continued into this past week, where Yeley’s team announced two different paint schemes. The first was the team’s “throwback” for next week’s action in Darlington. The scheme honored the late Kenny Irwin, Jr. with a paint scheme that never got to take the green flag – the #27 Nerf / Winner’s Circle Ford fielded by Blair Motorsports at Rockingham, which Irwin failed to qualify in 1997. The other scheme was for Saturday at Daytona. Representing the America Strong charity initiative, Yeley’s car would carry a patriotic paint scheme featuring a “Mount Rushmore” of military, law enforcement, and first responders. Although depicted as a 2015 Toyota Camry in one of its first renders, the actual car would be a current Chevrolet Camaro. Yeley drew the 33rd starting spot.
Taking the 40th and final starting spot was the #62 South Point Hotel & Casino / Beard Oil Chevrolet of Brendan Gaughan, who finished last on the Daytona infield road course event two weeks ago. The night race marked Gaughan’s penultimate NASCAR start before he’d call it a career following the Playoffs race in Talladega. The only drivers joining him in the rear were 12th-place Austin Dillon, whose #3 Dow Vorasurf Chevrolet for multiple inspection failures, and 14th-place Clint Bowyer in the #14 Haas Automation Ford for unapproved adjustments. For Yeley, the Rick Ware teams swapped radio channels, so the #27’s communications were on the channel for the #53 Sparks Ford of his teammate, Joey Gase.
When the green flag dropped, the last spot fell to Yeley, who Gaughan cleared as the two crossed the stripe. Yeley remained in 40th at the end of the first lap, but was reportedly being watched by NASCAR as early as Lap 3. The reason became obvious as Yeley lost power, and by Lap 5 had fallen off the lead lap, creeping along the apron of Turns 3 and 4. Unable to find a way to turn into the garage area, Yeley was directed by NASCAR through his spotter to the nearest entrance, where he was pushed behind the wall near Gate 12. On Lap 17, someone on the crew said “Yeah, we’re done – something internal,” and NASCAR reported him out with engine failure on the 18th circuit. Yeley later tweeted that something failed in the drivetrain, putting him out.
Yeley’s teammate James Davison took 39th after he and Brendan Gaughan collided in Turn 1, damaging the left-rear of Davison’s #51 Signing Day Ford. Josh Bilicki took 38th in the #7 Ariens Chevrolet of Tommy Baldwin Racing, having lost 13 laps due to persistent fuel pressure issues. The final spots in the Bottom Five were filled by the first of two multi-car accidents in the final laps. Taking 37th was Ryan Preece, who clobbered the wall off Turn 4 in the #37 Bush’s Beans Chevrolet. Ryan Newman took 36th, suffering damage in the same incident driving the #6 Guaranteed Rate Ford.
After starting last and suffering damage in the Davison incident, Gaughan recovered to finish a strong 8th, backing up his 7th in this year’s Daytona 500. Brennan Poole finished 15th in Rick Ware’s #15 Remember Everyone Deployed Chevrolet, improving on his career-best 16th in the same 500. Ross Chastain took 16th in the #77 Moose Fraternity Chevrolet, the same Spire Motorsports team that won this race last year with Justin Haley. This was Chastain’s third-best Cup finish, trailing his 10th and 12th last year at Daytona and Talladega.
Race winner William Byron secured his spot in the Playoffs by taking his first career Cup Series victory. In so doing, Byron became the first driver since 1976 to finish last in the Daytona 500, then win the summer 400-mile race later that same year. That year, Cale Yarborough lost the engine on his #11 Holly Farms Chevrolet after just one lap of the 500, then won the July race. Byron wrecked out of this year’s 500 after it was resumed on Monday afternoon.
LASTCAR STATISTICS
*This marked the first last-place finish for the #27 in the 400-mile race at Daytona since July 6, 2013, when Paul Menard’s #27 Rheem / Menards Chevrolet fell out with engine trouble after 23 laps of the Coke Zero 400.
THE BOTTOM FIVE
40) #27-J.J. Yeley / 3 laps / engine
39) #51-James Davison / 139 laps / crash
38) #7-Josh Bilicki / 151 laps / running
37) #37-Ryan Preece / 151 laps / crash
36) #6-Ryan Newman / 151 laps / crash
2020 LASTCAR CUP SERIES  OWNER'S CHAMPIONSHIP
1st) JTG-Daugherty Racing (6)
2nd) Rick Ware Racing (4)
2nd) Motorsports Business Management (3)
3rd) Chip Ganassi Racing, Hendrick Motorsports, Penske Racing (2)
4th) Beard Motorsports, B.J. McLeod Motorsports, Front Row Motorsports, Joe Gibbs Racing, Leavine Family Racing, StarCom Racing, Tommy Baldwin Racing (1)
2020 LASTCAR CUP SERIES MANUFACTURER'S CHAMPIONSHIP
1st) Chevrolet (17)
2nd) Toyota (5)
3rd) Ford (4)
2020 LASTCAR CUP SERIES DRIVER'S CHAMPIONSHIP 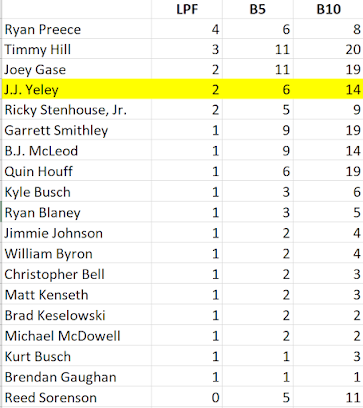