Kurt Busch picked up the 7th last-place finish of his NASCAR Cup Series career in the Drydene 311 Race 1 at the Dover International Speedway when his #1 Gearwrench Chevrolet was involved in a multi-car accident after 6 of 311 laps.

The finish, which came in Busch’s 708th series start, was his first of the season and first since September 15, 2019 at Las Vegas, 33 races ago. In the Cup Series’ last-place history, it was the 36th for the #1, the 602nd from a crash, and the 792nd for Chevrolet. Across NASCAR’s top three series, it was the 66th for the #1, the 1,219th from a crash, and the 1,735th for Chevrolet.
Coming into Dover, the site of his Cup Series debut in the fall of 2000, Kurt Busch had been a model of consistency. Through still without a win since last summer at Kentucky, he’d finished no worse than 18th since the season’s second race of the year in Las Vegas, locking him in a tight points battle with his brother Kyle. In all, he’d scored four top-five finishes and 14 Top Tens, earning an average finish of 11.4. His season-best runs were a pair of 3rd-place finishes back in the spring, both at Fontana and the Sunday round in Darlington. But while the Ganassi team had won the most recent Cup race at Dover last fall with Kyle Larson, Busch hadn’t taken the checkered flag in a Cup race there since 2011, when he drove for Team Penske.
Busch drew the 9th starting spot, and carried sponsorship from Gearwrench for the first time since Homestead.
Drawing the 40th and final starting spot was B.J. McLeod, who brought to the Cup Series his leased Chevrolet from Rick Ware Racing for the first time since Kansas. This time, he drove an all-black car with sponsorship from Royal Teak, a frequent backer of Jay Robinson’s team before the Premium Motorsports merger with Rick Ware Racing. “Keep him safe,” said the crew, “bring this thing back in one piece, and tomorrow we'll get a little more grip.” Dropping to the rear was another Ware / Premium entry, the #15 Remember Everyone Deployed Chevrolet of Brennan Poole. Poole was slated to start 30th, but dropped back alongside McLeod.
When the race started, both McLeod and Poole made quick work of 39th-place starter Garrett Smithley in the #7 Tommy Baldwin Racing Chevrolet. Smithley incurred a pass-through penalty for an impound rule violation, requiring him to serve the penalty after taking the green. Smithley lost a lap during the stop and was back up to speed on Lap 3. Meanwhile, McLeod had climbed to 36th, passing both Joey Gase in the #51 Race For Relief / Gift of Life Donor Program Ford and Quin Houff in a Harry Gant “throwback” paint scheme on his #00 Eagle Rock Wealth Chevrolet.
Busch, meanwhile, had fallen into the clutches of 13th-place starter Erik Jones in the #20 DeWalt Atomic Toyota. As the two came off the second corner, Jones looked to the inside, then made light contact with Busch’s left-rear, immediately hooking the #1 into the inside wall. Busch made hard contact with the left-front corner. Jones also suffered damage in the incident after he was immediately rear-ended by the #88 Acronis Chevrolet of Alex Bowman. All three made it to pit road.
“It’s gonna have to be cut off,” said Busch, who also reported he lost oil pressure. “It hit way too hard not to be.” By Lap 8, Busch had lost two laps, and took last from Smithley. “10-4, it’s done,” said someone on Busch’s crew. The team debated about whether to push the car or get a wrecker. It wasn’t until around Lap 12 that Busch was able to be pushed to the infield, at one point wondering if they would have to wait until a later caution. As they did, the team said they gave Jones “just enough room, but he just barely clipped us.”
Finishing 39th was Reed Sorenson, who endured a difficult afternoon in the #77 Spire Motorsports Chevrolet. With six laps to go in Stage 1, his car started trailing smoke from the right-front, and he pulled to the high lane. The crew believed he was dropping oil, so he pulled to the apron. Joey Logano was among the drivers to break loose in the fluid, though the field avoided any accidents. With four to go, Sorenson pulled down pit road with an even larger plume of smoke. Sorenson remained on pit road until Lap 74, when a wrecker pushed him to the garage. The crew discovered a wiggins clamp had come loose, causing an oil leak. He returned to action on Lap 149, 86 laps down, and ran just 83 laps in total before he pulled out a second time.
Finishing 38th was B.J. McLeod, who turned 166 laps before he pulled behind the wall. Smithley took 37th with Poole rounding out the Bottom Five.
LASTCAR STATISTICS
*This marked the first last-place finish for the #1 in a Cup race at Dover since October 2, 2016, when Jamie McMurray had engine trouble after 192 laps.
*This was also Kurt Busch’s first last-place finish in a Cup race at Dover.
THE BOTTOM FIVE
40) #1-Kurt Busch / 6 laps / crash
39) #77-Reed Sorenson / 83 laps / handling
38) #78-B.J. McLeod / 166 laps / handling
37) #7-Garrett Smithley / 241 laps / battery
36) #15-Brennan Poole / 286 laps / rear end
2020 LASTCAR CUP SERIES OWNER'S CHAMPIONSHIP
1st) JTG-Daugherty Racing (6)
2nd) Motorsports Business Management (3)
3rd) Chip Ganassi Racing, Hendrick Motorsports, Penske Racing, Rick Ware Racing (2)
4th) Beard Motorsports, B.J. McLeod Motorsports, Front Row Motorsports, Joe Gibbs Racing, Leavine Family Racing, StarCom Racing, Tommy Baldwin Racing (1)
2020 LASTCAR CUP SERIES MANUFACTURER'S CHAMPIONSHIP
1st) Chevrolet (16)
2nd) Toyota (5)
3rd) Ford (3)
2020 LASTCAR CUP SERIES DRIVER'S CHAMPIONSHIP 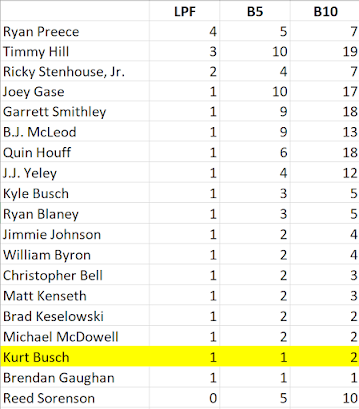