by William Soquet
LASTCAR.info Guest Correspondent
Owen Smith recorded the 2nd last-place finish of his ARCA Menards Series career in Sunday’s rain-delayed Menards 200 presented by Crosley Brands when his #11 Double H Ranch Chevrolet fell out with suspension problems after 14 of 127 laps.
The finish was Smith’s second consecutive, and came in his second series start.
The second race of the Toledo doubleheader weekend was scheduled for Saturday. It was mostly the same field, with the sole exception of a driver change in the Visconti Motorsports #74 car. After Giovanni Bromante ran the car on Friday night, Austin Green, son of Busch Series champion Mark Green, was scheduled to take over the car on Saturday. The team did not give a reason for this driver change.
Qualifying for the second race on Saturday was run on Friday evening; Smith secured the last starting spot with a lap of 20.089 seconds, nearly two seconds slower than the 15th-place car of Brad Smith.
Not long after the field took the green, Taylor Gray spun in turn three after Michael Self made it three wide with Gray and Hailie Deegan. A caution ensued for that incident, but it soon began to rain, and the yellow flag turned into a red flag with six laps complete.
After an ensuing seven-plus hour rain delay, the race was moved to Sunday at noon Eastern time. Unfortunately, there would be no live coverage on MAVTV or on the NBC Sports Gold TrackPass app. That meant that all live updates were routed through the ARCARacing.com live leaderboard. When the leaderboard restarted, it not only showed Gray a lap down, but also showed Tim Richmond a lap down in last place. The leaderboard was lagging under green flag conditions, and the exact last-place changes cannot be pinpointed. What is confirmed is that after running eight laps on Sunday, Owen Smith retired, citing suspension problems.
Mike Basham and Brad Smith were the only other cars to retire. Both cited mechanical problems. Rick Clifton and Tim Richmond, the last two cars running, rounded out the Bottom Five.
The second Toledo race marked the halfway point of the 2020 ARCA Menards Series season. All three championships are still wide open. Owen Smith is the only driver to record two last-place finishes so far this year. Chevrolet has a one-race lead on Toyota, 5-4,  and Fast Track Racing sits atop the team standings with four last place finishes, two ahead of second-place Wayne Peterson Racing.
THE BOTTOM FIVE
16) #11-Owen Smith / 14 laps / suspension
15) #48-Brad Smith / 28 laps / brakes
14) #10-Mike Basham / 64 laps / wheel bearing
13) #12-Rick Clifton / 119 laps / running
12) #06-Tim Richmond / 121 laps / running
2020 LASTCAR ARCA MENARDS SERIES MANUFACTURERS CHAMPIONSHIP
1st) Chevrolet (5)
2nd) Toyota (4)
3rd) Ford (1)
2020 LASTCAR ARCA MENARDS SERIES OWNERS CHAMPIONSHIP
1st) Fast Track Racing (4)
2nd) Wayne Peterson Racing (2)
3rd) DGR-Crosley, Kimmel Racing, Reeves Racing, Russ Lane Racing (1)
2020 LASTCAR ARCA MENARDS SERIES DRIVERS CHAMPIONSHIP 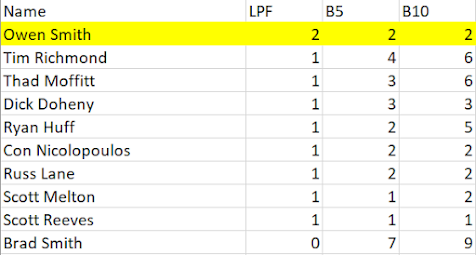