Owen Smith finished last for the third time in his ARCA Menards Series career in Friday’s Dutch Boy 150 at World Wide Technology at Gateway when his #10 Fast Track Chevrolet fell out with brake problems after seven laps.

The finish came in Smith’s third career series start.
Since his most recent start at Toledo Speedway, Smith has been relatively quiet, only posting a picture of his late model shop on Instagram. He arrived at Gateway to drive a plain white #10 car for Fast Track Racing. It was so plain, in fact, that Smith’s name was not printed on the name rail but rather handwritten on a piece of tape that went on the name rail.
The entry list for Gateway was a solid 21 cars, helped in large part by it being an off-weekend in both the East and West regional series. Bill McAnally Racing brought three cars while Rev Racing brought two. Kris Wright had an appearance in a rare Chevrolet entry from Chad Bryant Racing, and Kyle Sieg returned for another race in his limited schedule this year. A number of short-track fixtures also returned, including Ty Gibbs, Sam Mayer, Max McLaughlin, Chandler Smith and Tim Richmond. Fast Track filled its other two cars with a familiar face and a new one: Mike Basham returned to drive the #11, and South Texas asphalt modified driver Max Calles filled the seat of the #12. Missing from the list was Thad Moffitt, who ran the first twelve races of the season for DGR-Crosley.
The lone practice session ended with eventual race winner Gibbs on top of the board. Owen Smith was at the bottom behind Brad Smith, Basham, Calles and Richmond. The starting lineup was set by Sioux Chief Showdown owner points, leaving 16th-quickest Kyle Sieg as the last starter.
Heading to the green, however, Owen and Brad Smith both dropped to the rear of the field, with Owen Smith in last place when the race started. The 10 car held that position the entire race until he parked his entry. Meanwhile, Kyle Sieg had made his way up to 16th position by lap nine.
Mike Basham was the only other car that retired from the race, citing a vibration after 11 laps. Rounding out the Bottom Five were Brad Smith, Wright and Calles. Wright’s debut for CBR was hampered by transmission issues, per the team.
THE BOTTOM FIVE
21) #10-Owen Smith / 7 laps / brakes
20) #11-Mike Basham / 11 laps / vibration
19) #48-Brad Smith / 109 laps / running
18) #22-Kris Wright / 109 laps / running
17) #12-Max Calles / 114 laps / running
2020 LASTCAR ARCA MENARDS SERIES MANUFACTURERS CHAMPIONSHIP
1st) Chevrolet (8)
2nd) Toyota (4)
3rd) Ford (1)
2020 LASTCAR ARCA MENARDS SERIES OWNERS CHAMPIONSHIP
1st) Fast Track Racing (6)
2nd) Wayne Peterson Racing (2)
3rd) Brother-In-Law Motorsports, DGR-Crosley, Kimmel Racing, Reeves Racing, Russ Lane Racing (1)
2020 LASTCAR ARCA MENARDS SERIES DRIVERS CHAMPIONSHIP 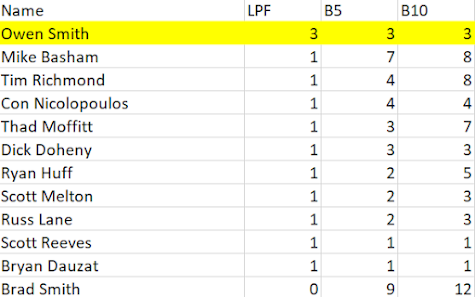 Why are the field sizes so small?