by William Soquet
LASTCAR.info Guest Contributor
Mike Basham finished last for the third time in his ARCA Menards Series career in Sunday’s VizCom 200 at Michigan International Speedway when his #11 Darrell Basham Trucking Chevrolet retired with transmission issues after completing 9 of the race’s 100 laps.

The finish came in Basham’s 75th series start, and was his first since Five Flags last year, 29 races ago.

With ARCA going to composite-body cars only at all races this year, a staple series entry has disappeared: the #34 Darrell Basham Racing entry. The team thrived working on older steel-body cars, and when those were phased out from the rule book, the team stopped fielding cars in races. However, that has not stopped Mike from still getting behind the driver’s seat. He has run over half of the events on the ARCA schedule so far this year, bouncing around the #01, 10 and 11 cars for Andy Hillenburg’s Fast Track Racing.

Those three Fast Track cars have more often than not been in contention for top-ten finishes this year due to lower car counts, and the same proved true at Michigan. Just 18 cars populated the initial entry list, but that number would come down to 17 by race day. Chad Bryant Racing did not field an entry - the first time in a very, very long time that there was no #22 car on track for an ARCA race. Anthony Alfredo reunited with his former Truck Series team, DGR-Crosley, for a one-off; Riley Herbst, Scott Melton and Ryan Repko took their turns as part-time drivers in full-season rides for Joe Gibbs Racing, Kimmel Racing and Venturini Motorsports, respectively. Jason Kitzmiller returned in his #97, and stepping in GMS Racing’s #21 entry was Kris Wright, making his ARCA debut in preparation for next week’s Truck Series race at the Daytona road course. In his hometown race, Con Nicolopoulos piloted the part-time #0 for Wayne Peterson Racing. Aside from Basham, Fast Track Racing also tapped local drivers, with Morgen Baird in the 10 car and Armani Williams, who was featured on Good Morning America on Sunday, in the 12 car.

All 17 cars took part in the only practice session of the weekend. Bret Holmes, again showing his intermediate prowess, took the top spot in practice, while Nicolopoulos was last in the session, running a lap about ten seconds slower than Holmes’ best lap of 39 seconds. As it was a companion weekend with NASCAR, there was no qualifying and the lineup was set by owner points, leaving Nicolopoulos alone in row nine. Ahead of him in row seven were two other part-time teams, Kitzmiller’s #97 and Wright’s #21.

Coming to the green, Nicolopoulos was the last car across the line. The leaderboard showed a tight battle between him and Basham for 16th in the early going. Basham had drawn the eleventh starting position by owner points. Soon, Basham gapped Nicolopoulos, and by Lap 4, was six seconds ahead, as Basham was 23 seconds behind leader Bret Holmes compared to 29 for Nicolopoulos. The #0 car was lapped on Lap 6; in the meantime, Basham overtook Brad Smith for 15th position, and both were lapped on Lap 7. Basham parked his car three circuits later, citing transmission issues.

The Bottom Five filled by pretty much the halfway point of the race. Nicolopoulos, Baird and Melton all had mechanical issues that ended their respective races. Wright’s debut came to an early end when the #21 machine snapped loose in turns one and two and slid up into the outside wall, the damage proving terminal in an incident that brought out a caution. 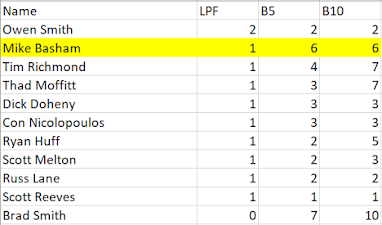 You have nice car. If you has youtube channel about cars, you can get youtube subscribers from this site https://soclikes.com/

As I am looking at your writing, 온카지노 I regret being unable to do outdoor activities due to Corona 19, and I miss my old daily life. If you also miss the daily life of those days, would you please visit my site once? My site is a site where I post about photos and daily life when I was free.