by William Soquet
LASTCAR.info Guest Contributor
Bryan Dauzat finished last for the second time in his ARCA Menards Series career in Friday’s General Tire 100 at the Daytona International Speedway Road Course when his #57 Brother-In-Law Motorsports Chevrolet failed to start the race.
The finish came in Dauzat’s 18th attempt at an ARCA Menards Series race, and was his first the 2016 season finale, 72 races ago.
The president of a construction company, Dauzat has dabbled in a number of forms of racing in the past decade. He was a regular in the NASCAR Whelen Southern Modified Tour before that series became defunct and has also made sporadic starts in the main Whelen Modified Tour, CARS Super Late Model Tour, ARCA Menards Series, and NASCAR Gander RV & Outdoors Truck Series.
When the Talladega entry list was released without Dauzat’s trademark #57 car on the list, it marked the first time since 2015 that Dauzat did not enter either one of the restrictor plate races. However, the Louisiana driver did find his way on to the entry list for the Daytona road course event for his first career ARCA road course start.
The overall entry list came close to the 25-car cap on the field, as 22 cars filled out the initial list. A number of road course ringers emerged for the series’ first road course start since 2017: Parker Chase, driving the Chad Bryant Racing #22; Ayrton Ori, driving the Visconti Motorsports 74 car; and Will Rodgers, driving the Steve McGowan Motorsports #17W car. Another road ringer not officially entered but still slated to compete was Colin Braun, scheduled to take over for Sam Mayer at the first caution of the race after Mayer suffered a hairline fracture in his wrist in a fiery Trans-Am crash at Road America on August 8.
Several other part-time drivers emerged for the race: semi-regulars Max McLaughlin, Russ Lane and Mike Basham; season debuts for Will Kimmel and Nick Igdalsky; and the series debut for Tim Monroe. Monroe, Ori, and Chase, the three series debuts, presented interesting contrasts: Monroe, a modified oval racer and Fast Track Racing crewman; Chase, an IMSA driver who had to give up a full-time 2020 slate to focus on education; and Ori, a sixteen-year-old aiming to be America’s next driver to appear on the Formula 1 circuit. A third entry for DGR-Crosley, the #54, was entered without a driver on the initial entry list and eventually withdrew.
Like most summer afternoons in Florida, Friday afternoon’s practice suffered a looming threat of rain. Also looming was the threat of the unknown, as many feared that ARCA competition throughout the weekend would be a more sloppy version of the inaugural Charlotte Roval race. Suffice to say, practice did in fact live up (or down?) to expectations. Practice started soon after 2:00 PM local time on Friday afternoon and within fifteen minutes, there was considerable action on track. Dauzat and Igdalsky had already found the tire barriers, and Russ Lane had an incident as well. Basham soon became the third car in the tire barriers. Midway through the session, Bret Holmes finally turned the first completed lap at a time of over nine minutes. Only thirteen cars took a time before practice was called for lightning, still leaving eight entries with little to no experience on track before the race.
As it was a no-qualifying weekend for the series, Dauzat was listed last on the starting grid due to the #57 having no previous attempts in 2020. Just ahead of him in Row 10 on the starting grid was Lane and Rodgers, both driving entries that have only made sporadic appearances this season.
Unfortunately, Dauzat never took the starting grid, as the damage to the front clip was too much to overcome. Tim Monroe pulled off coming to the green, and Brad Smith retired after one lap complete. Con Nicolopoulos took three laps around the road course before becoming the last driver to exit the race, as no drivers failed to finish due to crash damage. Ayrton Ori rounded out the Bottom Five, two laps down after multiple issues on track, including a cut tire in the closing laps after a spin in the grass.
THE BOTTOM FIVE
21) #57-Bryan Dauzat / 0 laps / did not start
20) #11-Tim Monroe / 0 laps / electrical
19) #48-Brad Smith / 1 lap / transmission
18) #06-Con Nicolopoulos / 3 laps / overheating
17) #74-Ayrton Ori / 26 laps / running
2020 LASTCAR ARCA MENARDS SERIES MANUFACTURERS CHAMPIONSHIP
1st) Chevrolet (7)
2nd) Toyota (4)
3rd) Ford (1)
2020 LASTCAR ARCA MENARDS SERIES OWNERS CHAMPIONSHIP
1st) Fast Track Racing (5)
2nd) Wayne Peterson Racing (2)
3rd) Brother-In-Law Motorsports, DGR-Crosley, Kimmel Racing, Reeves Racing, Russ Lane Racing (1)
2020 LASTCAR ARCA MENARDS SERIES DRIVERS CHAMPIONSHIP 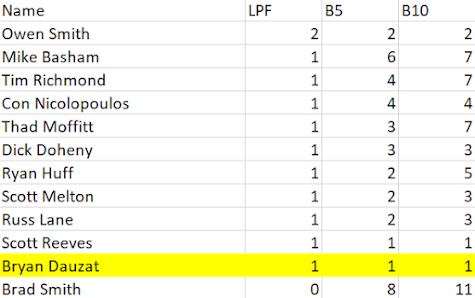