Kyle Weatherman picked up the 1st last-place finish of his NASCAR XFINITY Series career in Friday’s Alsco 300 at the Kentucky Speedway after his #47 #BackTheBlue Chevrolet crashed out without completing any of the 200 laps.

Less than 24 hours earlier at the same Kentucky track, the 21-year-old driver from Wentzville, Missouri had turned in the night’s most surprising run. Driving for Mike Harmon, an owner-driver who had never scored a single top-ten finish in either role since his NASCAR team debuted in 2008, Weatherman jumped from 13th to 8th in the final laps, a career-best for both driver and team. The run was Weatherman’s third-straight finish of 15th or better in the series, and came on a night where teammate Bayley Currey finished a respectable 22nd in Mike Harmon Racing’s flagship #74. After the field inversion, Weatherman would take the green Friday from the 8th spot.

Weatherman has been competing in NASCAR’s top three series since 2015, the same year he scored his lone ARCA Menards Series win on the New Jersey Motorsports Park road course. He made his only Truck Series start to date in that year’s Homestead finale, taking 23rd in a field of 32. He drove alongside teammate David Levine for Lira Motorsports in what would become Carlos Lira’s only start in the series. Lira would continue to field cars for Weatherman in ARCA the next year, where the youngster picked up three Top Fives in his eight starts – one each at Daytona, Salem, and Toledo.

By the time Weatherman started driving for Harmon in XFINITY, he’d already made nine Cup Series starts during the 2017 and 2018 seasons. He made his series debut for Rick Ware at Martinsville, where he took 35th, and finished 34th two rounds later in Phoenix. The next year, he made seven starts for StarCom Racing’s part-time second team, yielding a season-best 26th in the fall race at Las Vegas. Only once in these nine starts did he fail to finish – a transmission issue during the closing laps of the fall race in Kansas.

It was Ware’s affiliation with Harmon that got Weatherman into the XFINITY Series in 2019, driving the #17 entered under Ware’s name but increasingly overseen by Harmon. Again, he’d face a steep learning curve for his series debut at Bristol, but he finished 28th – his second-best run of the season. His best run came in his return to Kansas, where he took 22nd in place of Harmon himself in his flagship #74.

Weatherman’s XFINITY debut came as Mike Harmon Racing was showing signs of improvement. Starting in 2015, Harmon’s team began to cut their number of DNFs significantly, jumping from 33rd to 25th in driver points, and the team was no longer a frequent headline here at LASTCAR. Harmon did so while driving nearly every race in the same outdated Dodges he’d campaigned since 2013. Sponsors took notice, ranging from local brands like Skin & Bones Restoration and Elder Heating & Air to charitable organizations like commercial trucker initiative TruckersFinalMile.org. By 2017, these sponsorships took on a more patriotic flair as they frequently involved members of the armed forces, even re-branding his team as Veterans Motorsports. Most prolific of these were veteran groups The Shadow Warriors Project and The Journey Home Project, the latter with country music star Charlie Daniels as chairman. By 2018, Harmon hardly ran his Dodges anymore and committed to running Chevrolet full-time for the first time in six years, which allowed the team to improve further.

This year, Harmon fielded the former #17 team as a full-time second car, renumbering it the #47, the inverse of his traditional #74. Joe Nemechek, who shared Weatherman’s ride last fall, debuted the team at Daytona, where a PAC adorned it with logos for President Trump’s re-election campaign. Harmon remained in his #74, sponsored by another military group – Veterans 4 Child Rescue – and followed Nemechek across the finish line, the duo taking 15th and 16th. Weatherman made just two starts for the #74 before the COVID-19 pandemic suspended the season in March, taking 30th in Las Vegas and 34th after engine trouble in Fontana.

Since the resumption of the season, Harmon has turned the wheel over more to both Weatherman and his teammate Bayley Currey, who by then had also made some Cup starts with Rick Ware Racing. At Charlotte, the second race after the resumption of the season, it was Currey who earned a surprising 18th-place finish in Harmon’s #74, then ran 20th at Bristol and 18th at Atlanta. As of this writing, Currey has only finished worse than 26th one time since – a 34th last week on the Indy road course. Weatherman likewise took over for Nemechek and made the #47 his own, fighting inside the Top 10 during Stage 1 of both Homestead races, then finishing 15th back-to-back at Pocono and Indianapolis. All this culminated this past Thursday at Kentucky, where he earned the aforementioned 8th-place finish. That run came just three days after Charlie Daniels’ passing, and in a car honoring fallen police officer Jason “J.J.” Judd as part of the #BackTheBlue campaign.

Rolling off last on Friday was Brandon Jones, who on Thursday crashed out on the opening lap for the second time in three XFINITY races following a Turn 1 tangle with Jeb Burton. The wreck sent Jones to a backup car, incurring him a redundant tail-end penalty in the new #19 Menards / Atlas Toyota. Joining him at the rear in backups were 34th-place Daniel Hemric, the only driver swap as he took the place of Burton in the #8 Poppy Bank Chevrolet; the 20th-place #7 Brandt “Thank You Farmers” Chevrolet of teammate Justin Allgaier, discharged from the hospital hours earlier for a fast heart rate unrelated to his wreck the previous night; Colby Howard (32nd) in the #15 Project Hope Foundation Chevrolet; Kody Vanderwal (25th) in the #52 Advanced Dairy Services Chevrolet; Timmy Hill (21st) in the #66 RoofClaims.com Toyota; Brandon Brown (27th) in the #68 BMSRaceteam.com Chevrolet; and Ronnie Bassett, Jr. (19th) in the #90 Bassett Gutters & More Chevrolet.

When the race started, Stephen Leicht had again dropped to the very last spot in the same blue-and-orange #66 Jani-King Toyota Supra he ran in both races at Homestead. He trailed the field by open ground, joined by a red Chevrolet to his outside. As the leaders headed through Turns 1 and 2, however, Weatherman was running in the high lane, having already dropped two spots to around the 10th spot. Coming off the corner, Weatherman skated up the track and smacked the outside wall with the passenger side. As he came off the wall, then hit it again entering Turn 3, one set of his brakes came apart, and a piece struck the windshield of Allgaier’s #7. The incident didn’t draw a caution flag, and Weatherman pulled to the apron, then directly to the garage area, his right side flattened by the impact. This immediately took him out of the race under the Damaged Vehicle Policy.

The caution didn’t fall until Lap 4, when Ryan Sieg spun his #39 CMRroofing.com Chevrolet down the backstretch and nudged into the inside wall. Sieg lost multiple laps and returned to complete 22 circuits before suspension issues ended his day. Leicht commented his #66 was running much better than it had on Thursday, but he still turned only 52 laps, citing fuel pump issues for his 34th-place finish. Chad Finchum, Leicht’s teammate in the #13 CrashClaimsR.us Toyota, made multiple trips to the garage area for an apparent brake issue according to radio communications. Electrical issues were the official reason out when Finchum exited after 66 completed laps. Rounding out the Bottom Five was Ronnie Bassett, Jr., who had a vibration on his backup #90 Chevrolet following a brutal hit to the backstretch wall on the final lap of the Thursday race.

LASTCAR STATISTICS
*This marked the first XFINITY Series last-place finish for the #47 since July 28, 2012, when Stephen Leicht also failed to complete the opening lap of the Indy 250 at Indianapolis in an unsponsored white #47 Chevrolet for The Motorsports Group. Leicht happened to be the only active Kentucky winner to start Thursday’s race at the track, his win coming in 2007.
*This was also the eighth time in XFINITY Series history where the last-place finishers in two consecutive races at the same track both failed to complete a single lap. The most recent occurrence was at Michigan, where Tim Schendel had engine woes on June 14, 2014, then C.J. Faison retired with electrical issues on June 13, 2015. Thanks to Seth Eggert for the suggestion. 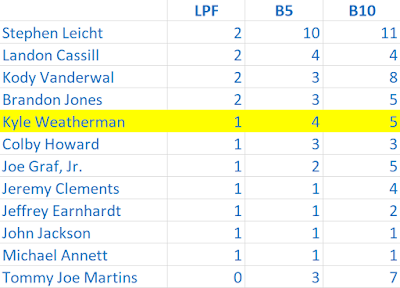