Stephen Liecht picked up the 7th last-place finish of his NASCAR XFINITY Series career in Saturday’s Kansas Lottery 250 at the Kansas Speedway when his #66 Jani-King Toyota fell out with transmission issues after 26 of 175 laps.

Leicht has continued to race for Carl Long’s team Motorsports Business Management, and at Kansas would run a now familiar paint scheme. He would run the same bright blue and neon orange Toyota Supra – a former superspeedway car – that was resurrected as a downforce car at Homestead. The car’s best showing came at Pocono, where he ran 27th despite electrical issues. The following round on the Indianapolis Grand Prix circuit saw him earn his best run of the season so far, taking a quiet 21st-place run in MBM’s #61.

Drawing the 37th and final starting spot was Colin Garrett, who reunited with Sam Hunt Racing in the #26 Rosie Network Toyota for the first time since Talladega. There was some delay in the field rolling off, however, as the crew for 26th-place Jairo Avila, Jr. at B.J. McLeod Motorsports was addressing an issue on the #99 Art General Contractor Toyota. As both Avila and Garrett followed the field onto the track, however, 33rd-place Myatt Snider unexpectedly pulled behind the wall with fuel pressure issues. The crew worked frantically to get Snider’s #93 The Original Louisiana Hot Sauce Chevrolet back on track, just as Tommy Joe Martins dropped from 28th to the rear for unapproved adjustments following a pre-race oil leak on the #44 AAN Adjusters Chevrolet. Somehow, Snider’s crew finished repairs, and the #93 sped back onto the track in time for the start.

When the green flag dropped, Leicht had dropped behind Martins into the 36th spot, 4.013 seconds back of the lead. Snider was still some distance behind Leicht in last place. At the end of Lap 1, Snider was 26.832 seconds back of the leader and a full 19.528 seconds back of Leicht. Snider had a fast car, however, and early on was told he had speed to match the driver in 10th. On Lap 5, Snider closed within 12.402 seconds of Leicht, then 10.448 seconds on Lap 6, all the while running two seconds faster than the cars in front of him.

Leicht, meanwhile, had problems of his own. His car was extremely loose, and on Lap 9, he was told to make a pit stop to tighten his #66. At the time, he was still in 36th and on the lead lap, 7.624 seconds ahead of the fast-closing Snider. Snider, however, couldn’t escape the leaders, who lapped him that time by, followed moments later by Leicht’s trip to pit road. The stop dropped Leicht to last on Lap 11. Meanwhile, the penalized Martins’ problems appeared to continue as NASCAR noticed the rear bumper of his #44 was “changing color,” indicating a possible return of his earlier oil leak.

On Lap 14, Leicht was nearly three laps down and still unhappy with his car. He prepared for another pit stop, this time for five rounds in the left-rear of his car. “Fucking thing’s loose on the straightaway,” said the driver. “I can’t turn the steering wheel left at all.” The competition caution on Lap 20 gave Liecht the chance to pit for the five rounds, the team hoping his car would stop skating around the track. Through the caution, Leicht pointed out this was the worst this particular Supra had handled all season, and team owner Carl Long said, “If we're not making any gains on it or anything else, take the thing straight to the trailer.”

Leicht still took the green flag for the Lap 26 restart, but things immediately went from bad to worse. The driver now had smoke in the cockpit, and the back of his seat was heating up to an uncomfortable degree. Leicht believed the added heat indicated a possible leak in the oil tank. On Lap 28, Leicht pulled into the garage, and appeared done for the day. But the spotter stepped in when he noticed something on the track.

Kyle Weatherman rolled off 35th in Mike Harmon Racing’s #47 #BackTheBlue Chevrolet, but by Lap 28 the engine had soured, catching the attention of Leicht’s spotter. “The 47’s blowing up,” he said. “Don’t call yourself out.” Weatherman said he was trying to reach the caution to end Stage 1, but NASCAR posted him for not meeting minimum speed. The believed issue was the battery as the car was down on power. He pitted on Lap 32, then the last car on the lead lap in 31st. By Lap 36, Leicht and Weatherman were in the final two spots, seven laps apart. A few laps by either driver could prove decisive.

Weatherman’s car was pushed behind the wall on Lap 39, and someone on the crew believed someone else had forgotten to charge the battery since last week in Texas. The crew took off the wheel and prepared to install a new battery. Leicht’s crew got word of Weatherman’s issues on Lap 44, informing the team of the narrow seven-lap gap between themselves and the #47. In the meantime, Dexter Bean suddenly pulled his #36 Genteel Coatings Chevrolet behind the wall, and on Lap 59 would be reported out with power steering issues. Now there was a chance for Weatherman to pass a car, and for Liecht to pass two.

First to re-fire his engine was Weatherman, who returned to action on Lap 52. He finally completed his 32nd lap on Lap 54. Back in the garage, the MBM team was getting Leicht back in the #66 when they soon saw Weatherman return to the garage on Lap 56. The driver of the #47 reported the car felt like it was “on the chip,” and that the alternator had likely failed. Both batteries were now dead, and the air conditioning system had stopped completely. The heat soon got to Weatherman, who was told to stay in the car while he waited for the team to report if they were out of the race. By then, he was now nine laps ahead of Leicht in 36th.

On Lap 62, Leicht’s engine roared back to life, and he re-entered the race 38 laps down. With 17 laps to go in Stage 2, he could mathematically pass Weatherman for 36th and come within two laps of passing Bean as well for 35th. Unfortunately, like Weatherman, Leicht’s issues returned immediately. The driver reported the car was “smoking like hell,” filling the cockpit and also trailing smoke from behind the car. This brought him back to pit road on Lap 66, at which point he’d closed back within seven laps of Weatherman. Weatherman, meanwhile, now found he couldn’t disengage the clutch on Lap 70. On Lap 71, Harmon himself told Weatherman to flip the ignition switch on and off, but the car wouldn’t respond. Two laps later, Denise Harmon-Mixon said “We’re done.”

On Lap 76, NASCAR confirmed Leicht was out with transmission issues even though “handling” and “oil leak” were perhaps more accurate based on the radio chatter. Weatherman wasn’t officially listed out until Lap 100, the team citing the battery rather than “electrical” or “clutch.”

Also officially listed out on Lap 100 was Brett Moffitt, whose #02 Knockaround Sunglasses Chevrolet went behind the wall on Lap 91 and was ultimately retired with an oil leak. The Bottom Five wasn’t complete until the final laps, when Jesse Little’s #4 JD Motorsports Chevrolet was wrecked after a late bump from Joe Graf, Jr.

Last-place starter Colin Garrett managed to climb to 16th by the finish, two spots ahead of Tommy Joe Martins, whose car held together after the earlier suspected oil leak. Myatt Snider earned a Lucky Dog on Lap 42 and finished 22nd, one spot ahead of Weatherman’s teammate Bayley Currey in 23rd. Also of note was the strong 19th-place finish for Leicht’s teammate Timmy Hill, driver of the #61 RoofClaim.com Toyota whose triple-header weekend ended with his fifth finish of 21st or better in the last six races.

Brandon Brown also nearly netted his fifth top-ten finish of the year in a photo finish with Justin Allgaier and Riley Herbst for 9th, coming up just short of the pair when his #68 BMSraceteam.com Chevrolet ran the low lane. 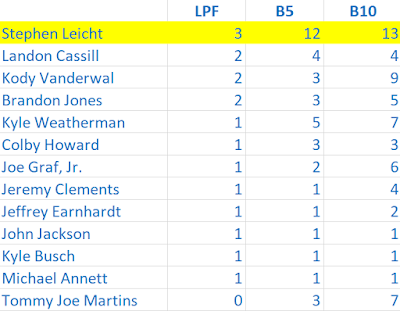