Jeffrey Earnhardt picked up the 3rd last-place finish of his NASCAR XFINITY Series career in Saturday’s Pennzoil 150 at the Brickyard at the Indianapolis Grand Prix Circuit when his #15 Flex Fit Chevrolet fell out with chassis issues after 9 of 62 laps.

Earnhardt has endured a tumultuous period in his career during the more than five years since his most recent last-place finish in the series. In 2015 came his Cup Series debut at Richmond, where he ran 40th in a 43-car field for Go FAS Racing. He ran a large portion of the 2016 schedule with the team, not including a handful of races for BK Racing. Next came a single-season deal driving the #33 Chevrolet of Circle Sport with The Motorsports Group, which soon welcomed sponsorship from Hulu. Success didn’t follow, however – Earnhardt finished no better than 26th and secured the 2017 LASTCAR Cup Series title with five last-place finishes.

All this preceded the arrival of sponsors iK9 and Xtreme Concepts, Inc., which secured Earnhardt a part-time Cup deal with Gaunt Brothers Racing in 2018, then a Cup and XFINITY deal in 2019 in affiliation with Joe Gibbs Racing. In seven XFINITY starts for both JGR and the start-up XCI Racing, he finished a season-best 3rd in the XFINITY race at Charlotte and led 29 laps in the season opener at Daytona, where he took the green on the outside-pole. He also made XCI Racing’s first Cup start in the spring race at Talladega, where he finished 22nd after a last-lap tangle with Kyle Larson. Unfortunately, this would be Earnhardt and XCI’s lone Cup start, and the deal came apart by the midpoint of 2019.

Earnhardt has now found his way back to Johnny Davis’ team JD Motorsports – the very same team he drove for in 2014. Over the offseason, he was announced as one of several drivers to share the #0, one of the team’s four near-identical red Chevrolets. Coming into Saturday’s race, Earnhardt made eight starts in the #0 with a season-best 14th at Talladega. He also carried a streak of four consecutive top-twenty finishes coming into Indianapolis, ever since new sponsorship from Eco Virux came on board for the double-header in Homestead.

For the inaugural race on Indianapolis’ infield road course, Mike Wallace was already slated to make his return to the series for the first time since 2016, and would drive Earnhardt’s ride in the #0. Earnhardt would then slide over to the #15, taking the place of Ryan Vargas, who wasn’t entered after his career-best 13th last week in Pocono. Incidentally, the team would not swap radio channels, so Earnhardt’s communications would still come across the #0 channel on NASCAR’s website. FlexFit 110 returned as sponsor after backing Earnhardt at both Atlanta and Talladega. Earnhardt drew the 18th starting spot and, in the first practice sessions since Phoenix, ran 27th in the first session before not participating in Happy Hour.

Drawing the 38th and final starting spot was Brandon Gdovic, who was making his first XFINITY Series start since November 12, 2016, when he ran 21st for his family’s Precision Performance Motorsports team. This time around, Gdovic would drive in place of Colin Garrett in Sam Hunt Racing’s #26 Windstax Energy Toyota. While no drivers incurred pre-race penalties, at least two drivers voluntarily fell to the rear: B.J. McLeod Motorsports teammates Vinnie Miller, set to start 35th in the #78 Kooblox Chevrolet and 33rd-place Matt Mills in the #5 Thompson Electric Chevrolet.

When the green flag dropped, Miller pulled ahead of Mills, dropping the #5 to last place. At the end of the first lap, Mills was 1.661 seconds back of new 37th-place driver Chad Finchum in the #66 LeithCars.com Toyota and 18.095 back of the race leader. The team instructed him to change up his braking into the first corner, and on Lap 4 was 32.22 seconds back of the lead, now 4.020 seconds back of Finchum. From there, Mills began to reel in Finchum, who then passed Miller for 36th. On Lap 6, Mills had the the deficit to Miller down to 1.790 seconds, and passed the #78 on Lap 9.

Earnhardt entered the last-place battle on Lap 10, when NASCAR reported he had slowed near pit entrance with an apparent flat tire. When NBC Sports showed Earnhardt’s car, it was clear the rear track bar had come loose, the left-rear tucked under the fender and right-rear protruding from the passenger side. The driver managed to make it to pit road, then pulled into the garage area for repairs. He took last from Miller on Lap 11 as NASCAR reported he went behind the wall with mechanical issues. Unfortunately, the team found something had punctured the oil tank. While first believed to be the driveshaft, it was in fact a brace from the unhooked sway bar that did the damage. Regardless, the team decided to not come back out. “We’re done, guys. We’re done, Chris. Sorry guys.” On Lap 14, NASCAR officials reported “15 out, chassis.”

Finishing 37th was Brandon Jones, whose #19 Toyota Service Centers Toyota erupted in flames on Lap 35, forcing him to pull off the track in Turn 9. Jones climbed out uninjured, but was done for the day. The last driver to pass him was Brett Moffitt, whose #02 Fr8 Auctions Chevrolet went behind the wall on Lap 15 with brake issues, then continued on to finish 18 laps down. Moffitt passed Jones in the final ten laps, but advanced no further than 36th. Tommy Joe Martins took 35th after the left-rear axle flew out of his car coming off the final turn, causing him to stop just past Turn 1. Rounding out the group was Bayley Currey, who finished 34th, eight laps down, in Mike Harmon’s #74 Stand For The Flag Chevrolet.

Currey’s car was one of three near-identically decorated Chevrolets in Saturday’s field, each sharing sponsorship from Repairables.com. The other two finished inside the Top 15. Jeremy Clements finished best of the group, taking 13th in his #51, two spots ahead of Currey’s teammate Kyle Weatherman in the #47 Chevrolet. Weatherman earned his second-straight 15th-place finish, building on Currey’s streak of top-twenty finishes earlier this year.

Brandon Brown, driving an unsponsored black-and-white Chevrolet, fought to finish 11th in the race, overcoming damage to the right-front fender and a rear bumper cover that came loose during the mid-pack battles. The NASCAR debut of Jade Buford, both a sports car racer and “Ninja Warrior” contestant, yielded a strong 14th-place finish in the #07 Big Machine Distillery Chevrolet.

DGM Racing also had a fine afternoon with all three of their drivers finishing no worse than 22nd-place Josh Williams, the other the two inside the Top Ten. Top of the group was Alex Labbe, who fought his way to an 8th-place finish in the #90 Prolon / VRVictoriaville.com Chevrolet. This marked Labbe’s third top-ten finish of the season and his second in three races, following-up his career-best 6th last fall on the Charlotte “Roval.”

Even more impressive was Preston Pardus, who in just his third career start stayed out when the leaders pitted to lead on the final restart. He held on to finish 10th in the #36 Chinchor Electric / Danus Chevrolet. The second-generation racer, son of Dan Pardus, had a previous best of 27th last fall on the Roval, where his family’s team rebuilt their car after a practice crash.

LASTCAR STATISTICS
*This marked the first time an XFINITY Series driver was classified last because of “chassis” issues. The only other time it had happened in NASCAR’s top three series was on May 10, 2019 in the Digital Ally 250, the Truck Series race at Kansas, where Joey Gase failed to complete a lap in the #10 Osage Contractors Chevrolet. 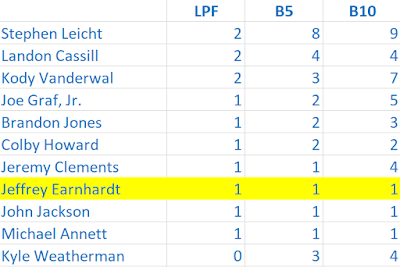