Brandon Jones picked up the 4th last-place finish of his NASCAR XFINITY Series career in Thursday’s Shady Rays 200 at the Kentucky Speedway when his #19 Menards / Atlas Toyota was collected in a two-car accident without completing any of the race’s 136 laps.

A frustrating string of bad luck has continued to follow Jones ever since his victory in Pocono’s Truck Series race. After apparently becoming the first NASCAR driver to finish last after winning a race on the same day (no other examples have yet been found in my research), he then had an oil line rupture last Sunday on the Indy road course, leaving him next-to-last in the 37-car field. The following round in Kentucky happened to be one of Jones’ worst tracks. Not only had he finished last there for Richard Childress Racing in 2017, but he’d finished no better than 26th in all but three of his eight XFINITY starts there. He drew the 6th spot for Thursday’s race.

Drawing the 36th and final starting spot was Tommy Joe Martins, who was without crew chief Danny Johnson after the left-rear axle came out of his #44 Chevrolet last week in Indianapolis, requiring a lengthy clean-up. Martins’ Gilreath Farms Red Angus Chevrolet wouldn’t spend long in the spot as two drivers had issues on pit road. First was Anthony Alfredo, whose #21 Alsco Uniforms Chevrolet had issues with the steering column before he could even start rolling. As Alfredo went to pit road, Josh Williams did the same in his #92 Sleep Well / Alloy Employer Services Chevrolet for a different mechanical issue. Both returned to the track in time for the start and were allowed to start their scheduled 11th and 18th, respectively.

Back on the track, two more drivers incurred pre-race penalties for unapproved adjustments: 27th-place starter Bayley Currey in the #74 Mutt & Jeff Porkskins Chevrolet and 26th-place Mason Massey in the #99 B.J. McLeod Motorsports Toyota. Both would ultimately start in front of Stephen Leicht, who after a strong 21st-place showing at Indy had voluntarily dropped back from 29th in the #66 Jani-King Toyota. When the green flag dropped, it was Leicht who was shown last across the stripe, 4.639 seconds back of the lead. Like Martins, Leicht would hold the spot for only a matter of seconds.

Heading into Turn 1, 3rd-place starter Jeb Burton was racing 2nd-place Ross Chastain when Burton’s #8 Rocky Boots Chevrolet broke loose and spun up the track, kicking up a layer of dirt and dust that had collected in the corner. Brandon Jones chose the high lane as he closed on the scene, trying to follow Michael Annett through. While Annett cleared the spinning Burton, the hole closed immediately after, and Jones slammed hard into Burton, destroying the left-front of his car and the right-rear of Burton’s. Jones kept rolling and pulled into the garage, done for the night. “Yeah, just go to the truck,” said the team, noting the serious damage to the #19’s nose and hood. Jones took last just moments after the impact with Burton in 35th. The wreck will put Jones in last place for the start of Friday’s second Kentucky race for the double-header.

Burton managed to barely clear the six-minute Crash Clock, leaving pit road with less than 30 seconds to go. On Lap 5, he completed his first lap with a NASCAR-mandated new rear bumper cover, and was further aided by both the ensuing competition caution and end of Stage 1 to allow all the repairs. During this time, he climbed past Leicht, who pulled in on Lap 22 and went straight to the team’s garage stall, citing electrical issues. Burton only managed to complete 45 laps before he, too, called it a night, taking 34th. The 33rd spot fell to Martins, the last-place starter, who lost several laps due to a vibration that sent him to the garage, then ultimately retired with rear gear trouble.

Rounding out the Bottom Five in 32nd was Colby Howard, who turned heads with a strong run in JD Motorsports’ #15 Project Hope Foundation Chevrolet. Late in the final stage, Howard was flirting with a top-ten finish, and at one point raced past the much higher-funded Richard Childress Racing entry of Anthony Alfredo for position. Alfredo finally got past Howard with 14 laps to go in regulation, when disaster struck. Still running 16th, Howard wrecked in Turn 1 and nosed into the inside wall, the right-front wheel visibly damaged from the impact. Howard signaled his displeasure as he walked to the ambulance, his car left in 32nd spot.

After Howard’s misfortune, the underdog story of Thursday’s race became Kyle Weatherman, who finished a career-best 8th in the #47 #BackTheBlue Chevrolet. In so doing, he gave longtime owner-driver Mike Harmon his first ever top-ten finish as a NASCAR team owner. Since 2008, Harmon has fielded a combined 280 XFINITY entries and 75 in the Truck Series. Harmon has himself finished last 15 times in the XFINITY Series as a driver, but only two of those have occurred in the last eight years. In that time, he’s made the switch from Dodge to Chevrolet and collected sponsorship so he could run full races. He’s also expanded to two cars, sharing driving duties with several road course specialists like John Graham, Nicolas Hammann, and Aaron Quine, as well as up-and-coming drivers like his current duo of Bayley Currey and Kyle Weatherman.

Weatherman began to turn heads earlier this year when he rejoined Harmon’s team at Homestead, where he finished 6th in Stage 1 of the Saturday race and nearly did it again in the Sunday race before mechanical issues slowed him both times. His next start came two races ago at Pocono, where he dodged several wrecks to take a career-best 15th. He then matched that run just last Sunday on the infield road course in Indianapolis. As Thursday’s race wound down, he worked his way to 12th with just 10 laps to go, defending his spot by running the high lane. In the final overtime finish, he jumped to 10th, then to 8th on the final lap. All of this came in just Weatherman’s 27th start across NASCAR’s top three series, his 15th in XFINITY. It also secures him an 8th-place start in Friday’s second race on the Kentucky track. All this came just days after the passing of country legend Charlie Daniels, one of the team's frequent supporters, and in a race where Weatherman's team raced in honor of fallen police officer Jason Judd.

LASTCAR STATISTICS
*Jones is the first XFINITY Series driver to score consecutive last-place finishes after failing to complete a single lap since the fall of 2014, when Jeffrey Earnhardt was involved in a first-lap crash at Charlotte on October 10, then lost the engine at Phoenix two races later on November 8. These happened to be Earnhardt’s most recent XFINITY last-place finishes before last Saturday at the Indy road course. 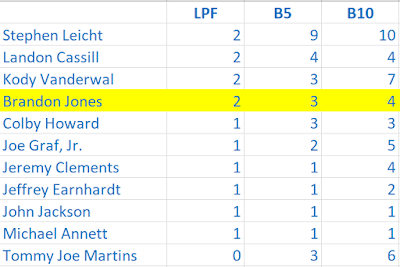