Norm Benning picked up the 15th last-place finish of his NASCAR Camping World RV & Outdoors Truck Series career in Saturday’s Buckle Up in Your Truck 225 at the Kentucky Speedway when his #6 H&H Transport Chevrolet fell out with engine trouble after 13 of 71 laps.

This finish also gave Benning sole possession of the all-time Truck Series last-place lead, breaking a tie with Johnny Chapman. All but one of those finishes have come driving his own equipment – the other came in a one-off for the late Mike Mittler at Texas on November 4, 2016. This comes just 13 days after Michael McDowell set the all-time Cup Series last-place mark at Pocono, breaking his tie with Joe Nemechek.

Benning and his underdog operation from Pennsylvania have continued to endure through even more adversity in 2020 as the COVID-19 pandemic threw some additional obstacles his way. Without a starting spot since a crash damaged his truck at Martinsville last fall, Benning missed the field for Daytona, then was unable to start the series’ first two races back in Charlotte and Atlanta after NASCAR changed their qualifying procedure. With practice and qualifying cancelled for all three of NASCAR’s national series, they would allow field increases of 40 for both XFINITY and Trucks. But with 47 entered for both races, a team’s rank in Owner Points proved decisive. Both times, Benning found himself exactly one spot short.

It wasn’t until last month at Homestead that Benning was able to make his first start of the year as he was finally one of the 40 entries for as many spots (a field cut further to 38 after two withdrawals). He finished 34th that day, out with handling issues, but ahead of two wrecked GMS Racing entries of Brett Moffitt and Zane Smith. He fared even better in the next round at Pocono, where he went from last across the stripe to 30th at the checkered flag, just one lap down. It was Benning’s 11th series start at the Pocono track, and as of this writing, he’s yet to fail to finish any of them.

Next came Kentucky, where Benning drew the 38th starting spot.

Taking 40th and last on the grid was Trey Hutchens, who like Benning, had been unable to start both Charlotte and Atlanta due to his few race attempts. This time, he’d be able to take the green in his #14 Chevrolet sponsored by Heinz Brothers Performance. He’d incur a redundant tail-end penalty for unapproved adjustments, and would be joined by the 36th-place #83 CMI Properties Chevrolet of Ray Ciccarelli, who missed a rookie meeting, and pre-race inspection infractions for Johnny Sauter (set to start 11th in the #13 Vivitar Ford), Derek Kraus (17th in the #19 ENEOS Toyota), and Ben Rhodes (6th in the #99 Tenda Ford). Hutchens was then instructed to slot in behind these trucks and take the green in the last spot.

When the green flag dropped, however, trouble once again broke out in the middle of the pack. This time, it was 29th-place starter Spencer Boyd, whose #20 Crowe Equipment Inc. Chevrolet erupted in smoke when he shifted into third gear. As NASCAR urged Boyd to pull below the yellow line, the driver later reported he stayed on the track to try and stay on the lead lap. Unfortunately, something had come loose under the hood, and he’d lost all the oil in the engine, leaving a trail of it on the apron, and much of it splattered against the firewall. He pulled behind the wall, apparently done for the day. “It’s dumping oil everywhere, I mean everywhere,” said Boyd, who also reported his gauges still showed 60 pounds of oil pressure and 200-degree oil temperature.

At the completion of that first lap, Hutchens had moved past Benning, who was classified last by a full 2.047 seconds back of 39th-place Hutchens. Boyd took over the spot under caution, when it was revealed his teammate Tate Fogleman had nearly crashed in the high lane of Turn 3 as Boyd fought his way to the bottom. Boyd’s crew decided to let the engine cool down and get back out on the track, though had reservations that the engine might let go if they did. As they worked, Benning lost laps for a mechanical issue, then Codie Rohrbaugh overcorrected in Turn 1 on Lap 14, crashing his #9 Pray for Joshua Chevrolet. For his second race in a row, Rohrbaugh climbed out of a destroyed truck, and would ultimately finish next-to-last. Benning, meanwhile, returned to the track, then NASCAR reported he pulled into the garage once more during the caution for Tim Viens spinning the #49 Trump-Pence 2020 / Hunter Up / CMI Motorsports Chevrolet on Lap 23.

On Lap 25, Boyd re-fired the engine in the garage and returned to the track, and on Lap 39, successfully passed both Rohrbaugh and Benning, putting them into the final two spots. At the time, Benning’s crew was also reportedly working on getting the #6 back onto the track, though there were hardly any radio communications. Benning was on the same lap as Rohrbaugh, who was confirmed out due to his crash on Lap 61. Jennifer Jo Cobb would also be listed out at that time after her #10 Fastener Supply Company Chevrolet tangled with Korbin Forrister’s #7 Nursing Home Heroes Toyota on Lap 48, and Hutchens would also be out with damage in the same wreck. Just one more lap by Benning would move him out of last place, handing it to Rohrbaugh, and if the race went the full distance, he would have caught both Cobb and Hutchens. Unfortunately, a lightning hold came out after the end of Stage 2, and a tremendous rain storm ended the race with just 71 laps complete. Benning was never officially confirmed out of the race, and was still shown “off” on FS1’s leaderboard just before the red flag. But the official results confirmed him out with engine woes.

This same rain storm kept Boyd from climbing any higher than 38th. Had he been able to climb just ten more laps, he would have climbed out of the Bottom Five altogether, passing Cobb, Hutchens, and Viens – the latter out with handling issues after he was black flagged for not meeting minimum speed. As it stood, Cobb and Hutchens rounded out the Bottom Five with Viens on the other side of the cutline.


With today's finish at @KySpeedway, Norm Benning has now secured the all-time last-place record for the @NASCAR_Trucks, breaking a tie he's had since last August with Johnny Chapman. It is Benning's 15th last-place run in the series. #LASTCAR pic.twitter.com/I4KSMJEB8K
— Brock Beard (@LASTCARonBROCK) July 12, 2020

LASTCAR STATISTICS
*This is Benning’s third last-place finish in a Truck Series race at Kentucky. The other two occurred on July 9, 2015, when the engine let go after 2 laps, and on July 6, 2017, where other problems under the hood prevented him from completing a lap. 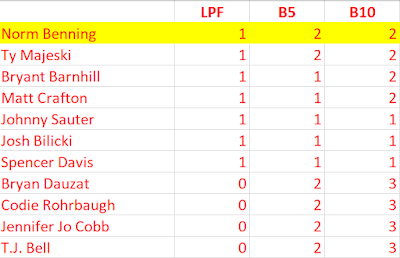