Tanner Gray picked up the 1st last-place finish of his NASCAR Gander Outdoor & RV Truck Series career in Saturday’s Vankor 250 at the Texas Motor Speedway when his #15 Ford / Ford Performance Ford fell out with transmission issues after 43 of 167 laps.

The youngest race winner and champion in the history of the NHRA, the 21-year-old Pro Stock racer from New Mexico has decided to give NASCAR a try. After years of racing for his family’s team in drag racing, Gray signed with David Gilliland’s team DGR-Crosley, who in 2019 fielded him a full-time ride in the NASCAR K&N Pro Series East. He’s proven a quick study. Gray won in just his third time out, leading 79 of 104 laps at South Boston, and finished third in the series standings. He also ran eight ARCA Menards Series races and finished Top Ten in five of them, capped by a 5th in Michigan. This vaulted him to the Truck Series, where in his first three starts he improved each time, never once finishing lower than 20th.

This year, Gray has earned a full-time ride with DGR-Crosley, which this year touts a manufacturer change from Toyota to Ford. Gray’s #15 would be almost exclusively carry logos from the manufacturer. Following a crash in the season opener at Daytona, Gray took his best finish of the season with an 8th in Las Vegas, then after a 20th in Charlotte finished no worse than 12th in the next four races. This put him a solid 13th in the series standings headed to Texas, where he drew the 20th spot on the grid.

Drawing the 36th and final starting spot was Norm Benning, who last week in Kentucky secured the all-time lead in Truck Series last-place finishes. Reports indicate Benning was in the process of returning to the race after he was sidelined with a broken rocker arm when lightning, then rain halted the race after 71 laps. With the engine now repaired, Benning lined up on the outside of Jennifer Jo Cobb’s #10 Fastener Supply Company Chevrolet. Hustling up on the inside was Angela Ruch, whose #00 The Wounded Blue Toyota didn’t start and had to be serviced on pit road. Ruch slotted into the 23rd spot just before one more pace lap was added.

On the backstretch just before the green flag, Gray had himself dropped to the final row with Benning now on his inside. According to DGR-Crosley’s Twitter account, Gray’s transmission had been sticking in fourth gear, causing him to surrender his starting spot. When the race started, Gray inched his way inside the Top 30 as Benning resumed the last spot, 4.547 seconds back of the lead when the field accelerated into Turn 1 for the first time. After the first completed lap, Gray had reached the 33rd spot with Benning now 8.676 seconds back.

Benning became the first to lose a lap on the 9th circuit, when Kyle Busch passed him to the outside. A moment later, NASCAR Officials noticed Sheldon Creed had slowed suddenly from the Top 5, his #2 Chevy Accessories Chevrolet dropping to the apron on the backstretch. Creed had a flat tire, and made an unscheduled stop, dropping him two laps down and putting him in last on Lap 11. Soon to join him in 35th was Spencer Davis, who after an early incident made an unscheduled stop of his own, and took last from Creed on Lap 15. By Lap 19, Creed passed both Benning and 34th-place Tim Viens in the #49 Trump 2020 Chevrolet, but Davis still hadn’t, his spotter reporting he “still (had) an issue.” Waiting out the end of Stage 1, Davis finally climbed past Benning on Lap 25, and the #6 soon after lost a third lap.

Gray re-entered the last-place battle on Lap 45 when he went behind the wall during the Stage 1 caution. “They’re gonna have to push me, it’s fucking smoked,” said the driver. According to team communications, the transmission issue from the start had returned, and now it had locked up completely. When the race restarted on Lap 47, Natalie Decker’s N29 Capital Partners #44 Chevrolet suddenly erupted in smoke at the start / finish line. As NASCAR told her to move below the line to keep the fluid off the groove, she was guided back to the garage area, where the truck had a serious oil leak. While Gray and Decker were in the garage, Akinori Ogata briefly took last in the #33 KYOWA Toyota before Benning re-took the spot on Lap 47, then Gray on Lap 48. Decker slipped to the 36th spot and would ultimately finish there. Benning slowed on Lap 50, and would also go to the garage.

Curiously, it took a very long time for NASCAR Officials to confirm any driver was out of the race. It wasn’t until Lap 93 that reported 35th-place Decker was out, announcing it at the same time as 32nd-place Tate Fogleman, who damaged his #02 Solid Rock Carriers Chevrolet in a tangle with Derek Kraus on Lap 80, and Johnny Sauter, who blew the engine on his #13 Vivitar Ford after 62 laps and took 33rd. Fogleman was reported to be out under the Damaged Vehicle Policy (DVP), but the official results indicated he was out due to a “crash.” On Lap 109, the quiet radio on Gray’s #15 channel was suddenly interrupted with a “We’re done, guys.” However, Gray wouldn’t be confirmed out by NASCAR until Lap 145 following the final round of green-flag stops. By then, Benning had been reported out on Lap 117 along with Brennan Poole’s #30 Remember Everyone Deployed Toyota under the DVP (out after 91 laps), followed by a report for Austin Hill’s #16 United Rentals Toyota on Lap 123 (out after 107 laps).

LASTCAR STATISTICS
*This marked the first Truck Series last-place finish for the #15 since November 15, 2019, when Anthony Alfredo’s #15 Friends of Jaclyn Foundation Toyota blew the engine shortly after the command to start engines for the Ford EcoBoost 200 at Homestead. The number had never before finished last in a Truck race at Texas.
*This marked the first time a Truck Series last-place finisher at Texas fell out with transmission issues since November 1, 2013, when Chris Lafferty’s #0 OEM Auto Parts Plus / Koma Unwind Chevrolet fell out after 4 laps of the Winstar World Casino 350. 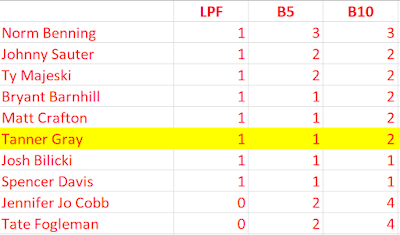