Kevin Donahue picked up the 2nd last-place finish of his NASCAR Gander RV & Outdoor Truck Series career in Friday’s Blu-Emu Maximum Pain Relief 200 at the Kansas Speedway when his #33 First Responder Racing Toyota fell out with power steering issues after 17 of 134 laps.

Kentucky marked Donahue’s first start in the Truck Series since June 23, 2018, when he finished a career-best 12th at Gateway. The finish was all the more special as he was driving for the late Mike Mittler, who considered the Missouri oval to be his home track. Mittler’s team would make just eight more starts before his failing health led to D.J. Copp operating the team. In those eight starts, the team finished no better than 22nd.

This time around, Donahue would drive for Josh Reaume, who originally didn’t have a driver listed for his flagship #33 Toyota until Tuesday. While his entry was listed simply under “First Responder Racing,” which was on his quarter-panels, a brief view of the truck during the FS1 broadcast showed the team also had hood sponsorship from Levrack (shared with teammate Dawson Cram in the #00) and TV panel sponsorship from 556 Bodyops. Donahue drew the 22nd spot for Friday’s race.

Starting 38th and last on the grid was Truck Series last-place record holder Norm Benning in his #6 H&H Transport Chevrolet. By Lap 5, the spot had fallen to 35th-place starter Ray Ciccarelli, who had withdrawn his #83 earlier in the week and took over for teammate Tim Viens in his #49 Springrates Automotive Suspension Parts Chevrolet. During this same run, Donahue had dropped to the 29th spot, and later revealed on Facebook that the power steering had failed on the opening lap. On or about Lap 10, Donahue made minor contact with the outside wall, and soon came to pit road for repairs. He took over last from Ciccarelli, but returned to the track three laps down.

At nearly the same instant, 9th-place starter Tyler Ankrum blew a right-rear tire on his #26 Liuna Chevrolet. This forced Ankrum to make two unscheduled stops as the tire ripped out the brake lines, forcing the team to push him behind the wall. When Robby Lyons’ spin drew the first caution on Lap 20, the FS1 cameras revealed Donahue was in the garage by this point, but Ankrum had edged Donahue for last place. Donahue’s crew had the hood up and were working hard on the right side. At the time, there appeared to be no significant damage from the encounter with the wall.

On Lap 36, Ankrum returned to the track about 22 laps down, and soon moved Donahue to last place. While Ankrum managed to climb out of the Bottom Five for a 33rd-place finish, Donahue never returned, and ultimately retired with the power steering issue.

Taking 37th was Bryan Dauzat, whose #28 FDNY Racing / American Genomics Chevrolet was out under the Damaged Vehicle Policy following a bizarre incident where he banged doors with Jordan Anderson’s #3 Bommarito.com / BG Services Chevrolet near the entrance of pit road. Benning finished 36th, out with handling issues after 50 completed laps. Korbin Forrister took 35th after his #7 Nursing Home Caregivers Toyota drew the race’s final caution flag on Lap 83. Rounding out the group was Ross Chastain, whose strong start was undone by brake issues on the #40 Trophy Tractor Chevrolet. Chastain will hand the wheel over to Travis Pastrana for the Saturday round of the double-header.

Donahue's last-place finish means the #33 will also start last in Saturday's second Truck Series race at the Kansas track. Donahue will run that race as well, but instead in Reaume's #00, taking the place of Dawson Cram, who isn't entered following a 25th-place finish. Starting last on Saturday will be ARCA Racing Series driver Ryan Huff, who will be making his series debut.

LASTCAR STATISTICS
*This marked just the second time in Truck Series history the last-place finisher retired with power steering issues. The only other occurrence was on May 18, 2012, when Clay Greenfield’s #68 @ClayGreenfield RAM fell out after 6 laps of the North Carolina Education Lottery 200 at Charlotte. 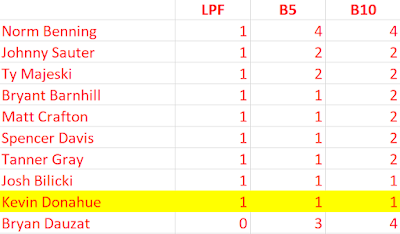