Bryan Dauzat picked up the 2nd last-place finish of his NASCAR Gander RV & Outdoors Truck Series career in Saturday’s E.P.T. 200 at the Kansas Speedway when his #28 FDNY / Fowler Companies Chevrolet fell out with electrical issues after 61 of 134 laps.

The finish also gives Dauzat the lead in the 2020 LASTCAR Truck Series Championship by a single bottom-ten finish over Norm Benning.

Duazat’s first Truck Series last-place finish was also his series debut at the tender age of 54. He’d made the transition from NASCAR Modifieds, which he has run on a part-time basis since 2008. He was brought on board by Jim Rosenblum who, like the late Mike Mittler, has been fielding trucks in the series since the inaugural 1995 season (though unlike Mittler, not in every season, and most often on a part-time basis). Dauzat has made each of Rosenblum’s Truck Series starts since 2017, the highlight of which was an 8th-place run at Talladega in 2018.

The COVID-19 break and NASCAR’s subsequent decision to cancel practice and qualifying have helped both driver and team remain on track. The break allowed the small team to repair their red #28 from a fiery crash in Daytona while the 40-truck fields have kept them in the show for five of the eight starts since. It's been anything but smooth sailing, however, as early spins, mechanical issues, and the truck's undercarriage dragging on the track have kept them running well back in the order. Races 4 and 5 would be the first Truck Series double-header at Kansas, where Fowler Companies replaced American Genomics as the team's associate sponsor. Unfortunately, the Friday race didn’t go well as the #28 banged doors with Jordan Anderson near the entrance to pit road, leaving them 37th of 38 trucks due to the Damaged Vehicle Policy.

With repairs made, Dauzat took the 36th spot in the 37-truck field. Jordan Anderson’s crew prepared their backup #3 Bommarito.com / BG Services Chevrolet and would have to drop to the rear along with backups for Sheldon Creed (8th), Spencer Boyd (29th), and Stewart Friesen (27th). The field had also shrunk by one entry from the first round of the Kansas double-header after Korbin Forrister did not have a backup truck following the wreck of his #7 Nursing Home Caregivers Toyota, which took 35th.

Taking the 37th and final spot on Saturday was last-place finisher Kevin Donahue in the #33 First Responder Racing Toyota. Donahue would incur a redundant pre-race penalty for a driver change as he’d originally been slated to run Josh Reaume’s #00 556 Body Ops Toyota, but swapped rides with the also penalized Ryan Huff, making his series debut. Also docked for swapping drivers were 34th-place Travis Pastrana, taking the place of Ross Chastain, and 19th-place Tyler Hill, replacing brother Timmy Hill in the #56 CrashClaimsR.us Chevrolet. These were in addition to the aforementioned four backup trucks and a transmission change for 5th-place Ty Majeski in the #45 Studio 45 Tavern Chevrolet.

Despite no fewer than nine teams sent to the rear for pre-race penalties, the last two trucks to take the green were ultimately Dauzat and 35th-place starter Norm Benning in the #6 H&H Transport Chevrolet, the pair of them 4.422 and 4.246 seconds back of the lead, respectively. Benning pulled ahead of Dauzat at the start, but on Lap 2, Ty Majeski dropped off the pace after banging doors with Tyler Ankrum’s #26 Liuna Chevrolet. Majeski brought his smoking truck to pit road and took last on Lap 4, 18.503 seconds back of the lead. The next time by, Majeski became the first driver to lose a lap to the leader, and fell two down by Lap 10.

By Lap 20, Jennifer Jo Cobb had also fallen two laps down in her #10 Fastener Supply Company Chevrolet. Cobb was four seconds off Majeski’s pace, but insisted her truck was handling well, only that the engine was “on its last legs.” Majeski caught and passed her for 36th on Lap 21. Next to take last was Travis Pastrana, making his series return in place of Ross Chastain in the #40 Plan B Sales Chevrolet. Pastrana pushed in a fender and cut down a tire, forcing an unscheduled green-flag stop just before the end of Stage 1. Pastrana had just managed to get back up to speed and put Cobb back in last place when the caution came out. Pastrana re-took the spot on Lap 34, then Cobb on Lap 35. During this same stretch, Cobb was told her white left-front wheel looked “Martinsville black” from high brake use.

On Lap 37, Norm Benning returned to the last spot and was three laps down. At the time, Benning was orchestrating his upcoming pit strategy – one stop for fuel, then the next for left-side tires. In so doing, Unfortunately, the team had trouble locating their full-face helmets, and were still filling the cans. Upset, Benning ultimately changed the strategy so he’d have the tire change done first, then fuel on the second stop.

During this, Benning was soon on the same lap as several drivers in front of him, and the group started to race each other for the spot. The sequence began after the Lap 43 caution where Dauzat spun in Turn 2, Benning putting Dauzat in last as a result. Dropping into contention now was Ray Ciccarelli, who on the same 45th circuit dropped to 36th in his #49 CMI Motorsports Chevrolet. On the restart, Dauzat then put Benning back to last on Lap 47 and also passed Ciccarelli, putting Benning into a race with the #49. Benning was faster than Ciccarelli on Lap 49, and passed him in the low lane on Lap 50. Ciccarelli hounded Benning for the next lap and made it back by on Lap 51. “He’s being a real asshole,” said Benning before this pass was made. Benning then took it to Ciccarelli once more and dropped the #49 to last on Lap 58. Ciccarelli responded on Lap 60, putting Benning back to last once more, and the #6 still held the spot at the end of Stage 2.

Prior to the race, Benning had also worked out a deal with FDNY Racing to use some of their crew members after the #28 was serviced. Benning specifically wanted Dauzat’s gas man to serve for the fuel stop, but unfortunately he was indisposed pushing the #28 to the garage area. Electrical issues were to blame, and Dauzat took last once again on Lap 65. Benning’s crew managed to get their work completed on pit road, and he went back to work racing Ciccarelli and the other lapped drivers. Ultimately, Ciccarelli would finish one lap and one spot ahead of Benning, the pair taking the checkers in 24th and 25th, respectively.

Several late-race wrecks filled the remainder of the Bottom Five. First was Cory Roper, whose #04 Carquest Ford wrecked in a Lap 78 tangle with Derek Kraus’ #19 ENEOS Toyota. The remainder of the group were devoured in the day’s biggest tangle on the Lap 83 restart. When Clay Greenfield’s #68 Rackley Roofing Toyota was bumped into a spin, eleven other drivers were collected. Most significantly damaged were 36th-place Natalie Decker in the #44 Ruedebusch Development Chevrolet, 35th-place Stewart Friesen in the #52 Halmar “Racing To Beat Hunger” Chevrolet, and 34th-place Johnny Sauter in the #13 Vivitar Ford. Greenfield was one of four other drivers eliminated under the Damaged Vehicle Policy soon after.

Amidst the chaos, the two most recent last-place finishers in the series both stayed out and restarted 1st and 2nd on Lap 87. Texas last-place Tanner Gray led three laps in the #15 Ford / Ford Performance Ford next to Kansas last-placer Kevin Donahue in the Reaume #33. While Donahue dropped 21 spots in the first three green flag laps, Gray held on to finish 4th – his career-best finish and first Top Five in just his 13th series start.

For more pictures and info on FDNY Racing, check out Jim Rosenblum's Facebook page at this link. 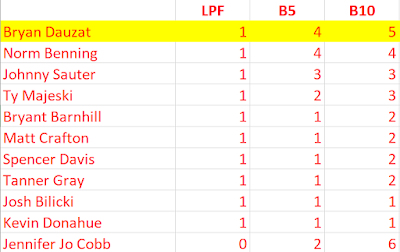