CUP: Ryan Preece last for a second-straight race after Timmy Hill, MBM crew fight to get the #66 back on track

Ryan Preece picked up the 3rd last-place finish of his NASCAR Cup Series career in Sunday’s Quaker State 400 presented by Walmart at the Kentucky Speedway when his #37 Kingsford Chevrolet fell out with transmission issues after 159 of 267 laps.

The finish, which came in Preece’s 58th series start, was his third of the year and second in a row. In the Cup Series’ last-place rankings, it was the 41st for the #37, the 79th from transmission issues, and the 787th for Chevrolet. Across NASCAR’s top three series, it was the 47th for the #37, the 162nd for a transmission, and the 1,725th for Chevrolet.

Following his last-place run at Indianapolis, Preece arrived in Kentucky with longtime JTG-Daugherty Racing sponsor Kingsford Charcoal on his #37 Chevrolet. In his only previous Cup start at the track last year, he finished 21st in a field of 36. But in his most recent of three XFINITY starts there in 2017, he finished a strong 4th for Joe Gibbs Racing. He drew the 32nd starting spot for Sunday’s race.

Drawing the 38th spot was Timmy Hill in Motorsports Business Management’s #66 RoofClaim.com Toyota. He’d be joined at the rear by two top drivers whose cars each twice failed inspection – 9th-place starter Martin Truex, Jr. in the #19 Auto Owners Insurance Toyota and 17th-place Matt Kenseth in the #42 Clover Chevrolet. When the field addressed itself to the starter’s stand, however, Truex and Kenseth lined up 29th and 31st, respectively. Hill moved up to Kenseth’s outside in 32nd followed by Daniel Suarez (#96), Quin Houff (#00), Josh Bilicki (#77), Garrett Smithley (#53), and Joey Gase (#51). Smithley had drawn the best starting spot of the group, slated to take the green in 25th. As it stood, Smithley’s #53 Victory Lane Quick Oil Change Chevrolet was 37th across the stripe with Gase’s #51 Donate Life Center / Pro Master Ford behind him in last place.

The field managed to complete the first lap without incident, and Gase set to work racing Smithley. At the end of 2 laps, however, Gase had fallen 1.187 seconds back of his teammate, the gap widening to 3.130 seconds after the fifth circuit. On Lap 14, Gase became the first driver to lose a lap, followed soon after by Smithley and Hill. But on Lap 21, just before the competition caution, Gase’s lap times improved with a 31.90, his best of the race so far.

Under the Lap 25 competition caution, Hill and Bilicki stayed out to take the wave-around, putting Smithley and Gase into a battle for the Lucky Dog. On Lap 31, Hill dropped Smithley to last, but Smithley got back by the following circuit. Gase’s lap times then continued to improve, and he was soon catching Smithley for 37th. This pass was made on Lap 48, after both drivers had lost a second lap to the leaders.

On Lap 54, Hill dropped to last place after he and Bilicki pitted following their gamble on the wave-around. Both dropped to four laps down, but Hill was in worse shape. His lap times were below those of Gase, and he wasn’t catching the Spire Motorsports entry of Bilicki. On Lap 69, Hill suddenly slowed on the track, reporting his dash had shut off and he was down on power. Believing it to be an issue with one or both batteries, he coasted down pit road. The crew checked the batteries and sent him back out on Lap 75, 12 laps down. The caution to end Stage 1 came out moments later.

Hill’s electrical issues continued, however, and the team brought him to the garage area on Lap 106. During this time, the MBM crew had prepared a backup alternator and ECU, and also brought the team laptop to program the new unit. Once in the garage, the team found the engine had lost the alternator belt, and they had to grab a replacement belt off the replacement engine. The team got the belt, but Hill said the car was acting as though it was running on just one of the two batteries. Unfortunately, the crew couldn’t find a suitable replacement battery on the Cup hauler, and concluded it was left on the departed XFINITY hauler by mistake. The team then struggled to re-fire the engine, and finally did on Lap 149. That time by, Hill returned to the track 54 laps down, but still in the running.

It wasn’t until around Lap 160 that Preece entered the last-place battle. The team looked over the car during a pit stop, bringing so many men over the wall that they incurred a penalty from NASCAR to be served if he returned to the track. Instead, he went to the garage. There, Preece still had difficulty putting the car in third gear, similar to the issue that hampered Ryan Blaney’s performance after his shifter popped out of gear in the early laps. Unlike Blaney, Preece’s issue proved terminal. On Lap 167, someone on Preece’s crew said “we’re done for the day.” NASCAR confirmed the team was out with transmission issues on Lap 175. It wasn’t until Lap 217 that Hill passed Preece for 37th. Around Lap 228, Hill would also exit with the same electrical issues.

A last-minute addition to the Bottom Five was John Hunter Nemechek, whose #38 Yanmar Ford crashed out on Lap 245, just as the otherwise placid race began to heat up. Nemechek made it back to pit road, but the heavy damage to the right side and rear of the car ended his run. Gase took 34th, two laps ahead of 35th-place Houff in the #00 Creek Enterprise Chevrolet.

LASTCAR STATISTICS
*The 159 laps completed by Preece set a new record for the most completed by a Cup Series last-place finisher at Kentucky, besting the mark of 110 set by B.J, McLeod last year.
*This marked the first time a Cup Series driver finished last at Kentucky due to transmission issues since June 30, 2013, when it happened to Scott Riggs’ #44 No Label Watches Ford after 6 laps. 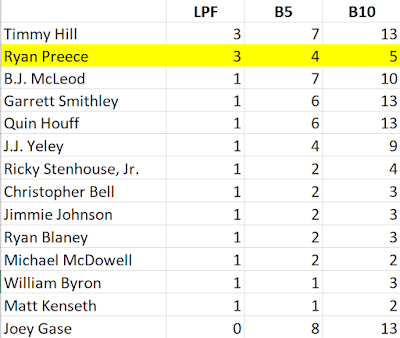