CUP: Rough stretch for JTG-Daugherty Racing continues after Ricky Stenhouse, Jr. has smoke in the cockpit

Ricky Stenhouse, Jr. picked up the 7th last-place finish of his NASCAR Cup Series career in Thursday’s Super Start Batteries 400 at the Kansas Speedway when his #47 Kroger Chevrolet fell out with electrical issues after 58 of 267 laps.

The finish, which came in Stenhouse’s 275th series start, was his second of the year and first since Darlington, 14 races ago. In the Cup Series’ last-place rankings, it was the 32nd for the #47, the 38th for electrical issues, and the 789th for Chevrolet. Across NASCAR’s top three series, it was the 49th for the #47, the 127th for electrical problems, and the 1,727th for Chevrolet.

Stenhouse’s most recent last-place finish came in NASCAR’s first race back after the COVID-19 pandemic paused the season. A first-lap accident put his #47 Chevrolet into the inside wall, and dropped him from 17th to 23rd in the point standings. In the weeks since, there have been just two highlights – a 4th-place finish in the Coca-Cola 600, and a near-victory at Talladega, where he led five laps and was edged by Ryan Blaney in a photo finish. Most often, mechanical issues, crashes, and just plain bad luck had kept Stenhouse well back in the running order. He was collected in the same pit road wreck at Indianapolis that started teammate Ryan Preece’s streak of three consecutive last-place finishes. Preece arrived in Kansas in position to become the first Cup Series driver to finish last in four straight point races.

Stenhouse drew the 25th starting spot, ten spots ahead of Preece in 35th.

Rolling off 40th and last was B.J. McLeod, who for the second-straight race was running new sponsorship from Axele.com on the #78 Chevrolet. This was reportedly the same car Vic Keller acquired from Rick Ware Racing to debut at Texas as Keller’s own #90. McLeod finished 33rd, avoiding the day’s biggest accident, and ran the car again in Kansas. He’d be joined by 33rd-place starter Josh Bilicki, who incurred a tail-end penalty for unapproved adjustments on his #53 RBR Aviation Chevrolet. Bilicki’s crew chief would be Todd Parrott, who was atop the pit box in each of McLeod’s previous starts in the #78. Ken Evans led the McLeod team on Thursday.

When the race started, Bilicki remained in last place, 3.612 seconds back of the lead, and dropped to 4.376 seconds back at the end of Lap 1. By Lap 4, he had re-passed McLeod, who soon closed on new 39th-place driver Timmy Hill in the #66 RoofClaim.com Toyota. By Lap 7, however, McLeod said his car was “pretty free everywhere” and “too left-front dominant.” This caused McLeod to lose his first lap on the 13th circuit, then a second around Lap 22. When the competition caution came out three laps later, McLeod was frustrated. “The worst 25 laps ever since I started running a Cup car,” he said in a calm voice. “We knew what we brought, I'm not mad at you guys. . .Thank you guys for trying.”

McLeod’s crew managed to make some significant adjustments under yellow, and the driver reported his car was “much better” on Lap 35. Regardless, he continued to lose laps. On Lap 39, he was shown three laps down, and said his car was still “free center-off.” By Lap 48, McLeod’s car was so sideways that he thought he’d broken a shock. NASCAR took notice, and on the next time by black flagged him for not meeting minimum speed. He pulled onto pit road for an extended stop on Lap 50, and returned six laps in arrears.

Stenhouse entered the last-place picture around Lap 60, when he came down pit road with smoke in the cockpit. The crew removed the passenger-side window and looked inside, tracking the smoke to beneath the dashboard. The smoke appeared to subside, but Stenhouse climbed from the car before the crew pushed the #47 behind the wall. Stenhouse took last from McLeod on Lap 64, but radio communications from the Stenhouse crew indicated they were still working on the car. On Lap 73, McLeod pulled behind the wall to address his handling problem, and the driver said “We’re done” on Lap 82. That same time by, Stenhouse’s crew removed the wheels from the #47. If Stenhouse turned just nine more laps, he’d be able to move 39th-place McLeod to last place.

Meanwhile, the garage continued to fill. On Lap 86, Brennan Poole’s #15 Spartan Mosquito Chevrolet went behind the wall with a fuel cell issue. Three laps later, Timmy Hill pulled in, once again struggling with their recurring fuel pressure issues. Poole returned to the track on Lap 125, followed soon after by Hill.

It wasn’t until Lap 133 that NASCAR officials confirmed McLeod was out, citing rear gear issues. The news reached Stenhouse’s crew, which believed they could pass both McLeod and Hill, the latter with a souring engine. But on Lap 150, the plan quickly changed. “We’re done,” said someone on Stenhouse’s crew. “Did it fire?” another asked. “No.” Three laps later, NASCAR officials relayed the message, announcing “47 out, electrical.” With that, Stenhouse and McLeod took the final two spots.

Hill ultimately fell out of the race after 116 laps and took the 38th spot. Rounding out the Bottom Five were Bubba Wallace in the #43 Victory Junction Chevrolet and Matt DiBenedetto in the #21 Menards / Dutch Boy Ford, who tangled in a multi-car accident after Joey Logano slid up the racetrack in Turn 2. Wallace, who was recovering from an early spin through the grass, tore up his right-front fender after contact from DiBenedetto, who slammed hard into the outside wall.

As for Ryan Preece, his #37 Bush’s Beans Chevrolet had remained on the lead lap into the opening laps of the final stage, where he’d worked his way to around 13th spot on Lap 182. But when Ryan Newman put Christopher Bell into the wall, both spinning cars caught Preece in the low lane. The three made contact, sending Preece so hard into the inside wall that his car flipped on its side as it switched ends. Fortunately, Preece was uninjured as he climbed out, but his Chevrolet finished 34th. 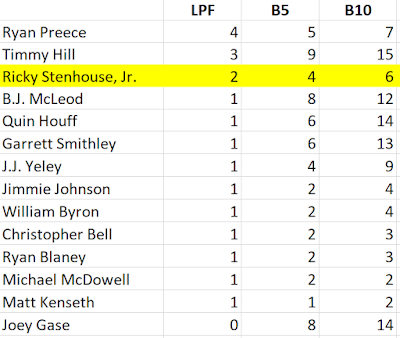