Ryan Preece picked up the 4th last-place finish of his NASCAR Cup Series career in Sunday’s O’Reilly Auto Parts 500 at the Texas Motor Speedway when his #37 Glad Chevrolet was collected in a multi-car pileup after 217 of 334 laps.

The finish, which came in Preece’s 59th series start, was his fourth of the year and third in a row, tying a NASCAR record (see below). He also takes the mid-season lead in the 2020 LASTCAR Cup Series Championship.

No driver has ever scored four consecutive Cup Series last-place finishes. Preece can be the first if he finishes last this Thursday in Kansas.

Preece’s most recent last-place finish in Kentucky was followed by another difficult night in the All-Star Open at Bristol. Driving his #37 Energizer / Morton Buildings Chevrolet, he failed to transfer into the main event, taking 13th in the final laps, and his car then caught fire as it sat on pit road. The following round at Texas would see him carry sponsorship from Glad plastic bags. In three previous starts at the track, he’d finished no better than 22nd, but each time finished under power no more than eight laps down to the race winner. Preece drew the 25th starting spot.

Drawing the 40th and final starting spot was Reed Sorenson, back behind the wheel of a Cup car for the first time since Martinsville. Sorenson would incur a redundant tail-end penalty after his #7 Gorilla Glue Chevrolet repeatedly failed pre-race inspection. Joining Sorenson at the rear would be 8th-place starter Chase Elliott, whose #9 NAPA Auto Parts Chevrolet was nabbed for the same reason. Elliott would hardly spend any time in last place as three Rick Ware-affiliated cars dropped to the back for driver changes: 27th-place Josh Bilicki in the #53 Junction Fuels Chevrolet, 31st-place Joey Gase in the #51 Red Rock Secured Ford, and 35th-place J.J. Yeley in the #77 Formula One Imports Chevrolet. Sorenson resumed his spot in last for the start, 5.137 seconds back of the leader and alongside still another car, B.J. McLeod’s #78 Axele.com Chevrolet.

On Lap 3, Gase fell behind Sorenson for last place, and the crew soon told Gase to run his right-side tires into the groove of PJ1 for faster laps. Gase was the first to go a lap down on the 13th circuit, at which point his spotter was concerned about teammate Bilicki slowing down in the #53. Pit stops under the competition caution handed last to McLeod on Lap 24, then Bilicki on Lap 25, at which point the #53 was now two laps down. Gase retook last on Lap 56 after a green-flag stop, but Bilicki took the spot again on Lap 85.

Next to take the spot was Brennan Poole, who was frustrated after his #15 Spartan Mosquito Chevrolet cut down a tire after contact from fellow rookie Tyler Reddick. Poole made an unscheduled stop on Lap 99, running slow with the right-rear tire coming apart. A second stop dropped him seven laps down, putting him into last place on Lap 110. Poole then passed Bilicki on Lap 112. Jimmie Johnson’s difficult season then continued on Lap 117, when he slapped the wall off Turn 4. Johnson’s #48 Ally Chevrolet dropped back as he pitted for tires and repairs, then incurred a two-lap penalty for too many men over the wall while under the Damaged Vehicle Policy. Meanwhile, Poole took last again on Lap 120, McLeod on Lap 122, Gase on Lap 124, then finally Johnson for the first time on Lap 130.

Timmy Hill took last from Johnson on Lap 148. Before the race, track president Eddie Gossage presented Hill with a cowboy hat, commemorating his win in the eNASCAR iRacing Pro Invitational Series earlier this year. Unfortunately, Hill’s car on Sunday struggled, and was eight laps down when he took last from Johnson. Johnson re-took the spot from Hill by Lap 172, followed by McLeod around Lap 187. Just before the end of Stage 2, McLeod was put a 12th lap down by then-leader Ryan Blaney. McLeod would still be last when a huge wreck changed the complexion of the battle.

One lap into the final stage at Texas, Preece was running around the 18th spot on the lead lap when trouble broke out among the leaders. As Kyle Busch’s #18 Interstate Batteries Toyota threaded the needle between Joey Logano’s #22 Shell / Pennzoil Ford and Aric Almirola’s #10 Smithfield Ford, Almirola clipped Busch into a spin, collecting his teammate Martin Truex, Jr. in the #19 Bass Pro Shops / Tracker Boats Toyota. The contact spun Truex driver’s side first into the outside wall, then bounced him back into traffic. Preece, who was following Kentucky winner Cole Custer through the melee, rear-ended Custer’s #41 HaasTooling.com Ford as Custer slammed into the spinning Truex. The result stoved in the nose of Preece’s smoking car and destroyed Custer’s, but Truex was somehow able to clear the “Crash Clock” on his second lap at speed.

After the red flag was lifted, the lowest-classified driver involved appeared to by Chris Buescher, whose #17 Roush Performance Stage 3 Ford had nosed into the inside wall. But Buscher, like Truex, managed to complete repairs, and under caution, he was moved ahead of Preece. Preece went to the garage along with Custer, and would later be joined by Preece’s teammate Ricky Stenhouse, Jr., whose #47 Kroger Chevrolet failed to clear the “Crash Clock” on Lap 221. On Lap 230, Preece took last place from McLeod. And on Lap 235, NASCAR confirmed that Preece, Custer, and Stenhouse were out due to crashes. Those three took the first spots in the Bottom Five.

Taking 37th was William Byron, whose #24 Axalta Chevrolet was collected in a wreck with Ty Dillon’s #13 GEICO Chevrolet in the final laps. Byron made it to pit road, but Chad Knaus quickly surmised the damage was total, and the crew pushed the car back to the garage. Timmy Hill rounded out the Bottom Five when electrical issues put them out of the race.

LASTCAR STATISTICS
*Preece is just the fourth driver in NASCAR history to finish last in three consecutive Cup Series points races. The first instance was August 8-23, 1960, when G.C. Spencer and his #48 1958 Chevrolet finished last at Columbia, South Boston, and Bowman Gray Stadium. The next wasn’t until August 22-September 12, 2009, when Dave Blaney’s #66 PRISM Motorsports Toyota trailed at Bristol, Atlanta, and Richmond. The most recent occurrence was June 13-27, 2010, when Max Papis’ #13 GEICO Toyota was last at Michigan, Sonoma, and Loudon.
*This marked the second time the #37 finished last in a Cup Series race at Texas. The previous time was on November 6, 2005, when Mike Skinner’s #37 Patron Tequila / BoSPOKER.net Dodge fell out with rear end trouble after 151 laps of the Dickies 500. 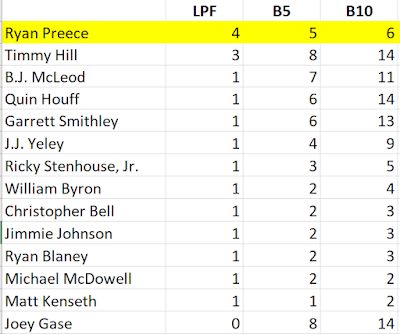