Michael Annett picked up the 4th last-place finish of his NASCAR XFINITY Series career in Monday’s Cheddar’s 300 Presented by Alsco at the Bristol Motor Speedway when his #1 Pilot / Flying J Chevrolet was collected in a multi-car accident after 5 of 303 laps.

After a frustrating 2018, Annett has found new life with his #1 team at JR Motorsports. The turnaround began immediately, when he cruised to victory in the 2019 opener at Daytona – his first series victory in his 230th series start. He remained in Playoff contention through the penultimate round at Phoenix, where even a 9th-place finish – his 19th top-ten finish in 33 starts – wasn’t quite enough to make the Final Four.

The 2020 season has proven more difficult. Coming into this season, he ran 11th despite a last-lap wreck at Daytona and 7th at Las Vegas, he ran no better than 17th in the next three rounds before the season was suspended. He then managed just 25th in the return at Darlington before recovering for a 7th-place showing in Charlotte. He still stood 10th in the point standings, just 82 markers short of leader Chase Briscoe.

For Bristol, Annett drew the 12th starting spot for Monday’s race. As with the rest of the field, his windshield banner carried the name of a XFINITY employee - Leriqua Jackson. After a momentary delay getting strapped into the seat and his radio secured, the #1 rolled off pit road.

Drawing the 37th spot was Stephen Leicht, who returned to Motorsports Business Management’s #66 Toyota for the first time since his last-place finish in last month’s series return at Darlington. When the engines fired, however, the MBM team found they couldn’t close the window net. The team struggled to compress the roll bar padding, but couldn’t close it by the time the field started to roll. The team was instructed to pull their car to their pit stall – number seven, right next to the Joe Gibbs Racing stall for Riley Herbst’s #18. “We need to get a wrench for this bottom bar so we can get it to move,” said the frustrated Leicht crew.

Leicht managed to get rolling again and join the tail end of the field, only for another car to stall on the track. This time, it was 34th-place qualifier Mason Massey in B.J. McLeod’s #99 Gerber Collision & Glass Toyota. “Has no pedal whatsoever,” said Massey. “Can you get it in gear or anything to push-start it?” asked the crew. A truck came to give him a push start, but this failed, and he came to pit road. The crew frantically tried to get him re-started before the green flag, but missed the start of the race. On Lap 4, NASCAR Officials reported Massey had been pushed to the garage, and the team parked the car behind the hauler located near the Turn 1 portion of the infield. Moments later, the caution fell.

On Lap 6, Annett was working his way through the pack when trouble broke out in Turn 4. Ross Chastain lost a tire on his #10 Nutrien Ag Solutions Chevrolet and clipped the #22 Odyssey Battery Ford of Austin Cindric, sending Cindric backing into the outside wall. Annett caught up to the spinning Chastain and chose the high lane, trying to squeeze between the #10 and the outside wall. But the hole closed and Annett slammed into the rear of Chastain’s car, destroying his left-front and bouncing him off the wall. While Chastain and Cindric made it back to pit road, Annett stopped on the apron of Turn 1. He climbed out unhurt, but done for the night. Cindric turned just three more laps before he, too, fell out from the crash damage.

From there, the garage area filled rapidly. Jeff Green was driving the same C2 Freight Chevrolet from his strong run at Phoenix, but pulled into the garage around Lap 18. He returned to the track on Lap 29 as Leicht pulled behind the wall, then returned to the garage on Lap 32. Also struggling was Alex Labbe, whose #36 Prolon Controls Chevrolet was posted for a pass-through on Lap 29, then came into the garage a few laps later. Labbe’s teammate Ronnie Basett, Jr. pulled the #90 Bassett Gutters & More Chevrolet behind the wall with engine trouble on Lap 77, five laps after Joe Nemechek’s #47 Mutt & Jeff Porskins Chevrolet was parked under the Damaged Vehicle Policy following a tangle with Harrison Burton.

While all this was happening, Massey’s team continued to work on the #99, though there was virtually no radio communication from the team over NASCAR’s scanner. The car could be seen from FS1’s camera looking up the end of the frontstretch pits. The car was apparently on jack stands with one wheel off, the hood up, and one to two crewmen standing around it. On Lap 113, NASCAR Officials confirmed that Green, Leicht, Labbe, and Bassett were out of the race, but made no mention of Massey. Soon to join them was Patrick Emerling, whose XFINITY debut with Our Motorsports ended on Lap 142 when he was reportedly dumped by Matt Mills in Turn 3, destroying the #02 Robert B Our Co. Chevrolet.

Then, on Lap 184, NASCAR Officials reported Massey was “back in the race.” He apparently exited the garage and stopped in his pit stall as he did not complete his first lap until the 189th circuit. Back on the track with 111 laps remaining, Massey had enough time to climb to 30th position, coming just short of passing the wrecked Emerling. On Lap 195, he dropped Annett to last place. He ultimately completed all 111 of the remaining laps, and briefly was seen in the broadcast with 84 laps to go. He finished 30th, the last car to finish under power. It was a run truly befitting of Massey, whose Twitter biography says simply “I don’t believe in failure.”

By climbing out of the Bottom Ten, Massey shuffled Labbe into his first Bottom Five of the year ahead of Leicht, Green, Cindric, and Annett. Annett left the race 13th in points, 130 markers back of Briscoe’s lead.

A.J. Allmendinger bounced back from his DNQ at Daytona and multiple issues in the race to put Kaulig Racing’s part-time team in 10th. In so doing, he edged both B.J. McLeod and Vinnie Miller, who were each briefly in 10th place during the run to the checkers. McLeod, the owner of both Miller and Massey’s car, equaled his career-best at Daytona in July of 2017. Miller charged into the Top 10 early, overcame a spin with Timmy Hill, and was briefly on the front row for a late restart. He, too, came one spot short of a career-best in the 2019 July race at Daytona.

LASTCAR STATISTICS
*Car #1 hadn’t finished last in an XFINITY Series race since August 11, 2007, when Max Papis lost the engine on his #1 Miccosukee Resorts Chevrolet after just 2 laps of the Zippo 200 at Watkins Glen.
*This marked just the second time car #1 has finished last in an XFINTIY Series race at Bristol. The only other time occurred on April 13, 1991, which proved historically significant. It was Jeff Gordon’s first last-place finish in the series, where his #1 Carolina Ford Dealers Ford lost an engine after 22 laps of the Budweiser 250. It was Gordon’s first last-place finish in a NASCAR national touring series, and his only one in the XFINITY Series. 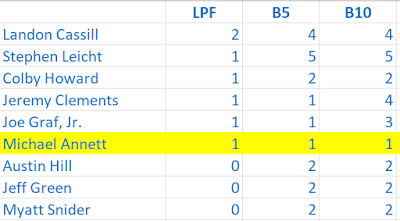