John Jackson picked up the 6th last-place finish of his NASCAR XFINITY Series career in Saturday’s Unhinged 300 at the Talladega Superspeedway when his #66 CrashClaimsR.us / James Carter Attorney Toyota fell out with overheating issues after 40 of 113 laps.

The finish, which came in Jackson’s 36th series start, was his first of the season and first since April 6, 2019 at Bristol, 37 races ago. In the XFINITY Series’ last-place history, it was the 9th for the #66, the 35th from overheating issues, and the 135th for Toyota. Across NASCAR’s top three series, it was the 73rd for the #66, the 175th from overheating, and the 334th for Toyota.

Jackson was making his first start of the 2020 season and his first at Talladega since 2016, when he ran 32nd for the same Motorsports Business Management team. Last year, he made seven starts for MBM, and in all but one start failed to finish with no fewer than 82 laps complete. He finished last at Atlanta and Bristol, turning no more than 14 laps. But the lone exception came at Daytona, where he turned all but two laps and finished 32nd in MBM’s #42 Toyota Supra.

According to @StartAndParkCar on Twitter, Jackson’s ride for Saturday’s race was the same green-and-white Supra that Max Tullman ran last year. One of the team's former superspeedway cars was converted to downforce tracks and run by Stephen Leicht last weekend in Homestead. It was also reportedly a full-race effort, the team bringing one-and-a-half sets of tires, though they’d planned to run by themselves out of the draft and log laps. This, however, apparently changed on race day, where he drew 38th in the 39-car field.

Starting last in the race was Colin Garrett, who was giving Sam Hunt Racing their first superspeedway start. His #26 The Rosie Network Toyota was joined at the rear by three drivers who incurred pre-race penalties: 28th-place Mason Massey in the #99 Gerber Collision & Glass Toyota for an unapproved adjustment, 34th-place starter A.J. Allmendinger in the #16 Ellsworth Advisors Chevrolet who along with Jeb Burton in the #8 LS Tractor Chevrolet failed inspection, and 29th-place Tim Viens in the #47 Patriots of America PAC Chevrolet.

Viens parted ways with Mike Affarano’s Truck Series team after their withdrawal at Homestead last week. He was a last-minute driver change at Mike Harmon Racing, replacing Joe Nemechek, who also ran the red-white-and-blue car at Daytona. This driver change was what incurred the pre-race penalty. While both the car and Viens were sponsored by PACs supporting President Trump’s re-election, they were different PACs, so the campaign logos were missing from the #47 Chevrolet.

Before the pre-race penalties were incurred, several drivers stalled on pit road and needed a push, including Jackson and 26th-place Kody Vanderwal, who was driving a former JR Motorsports car as his latest #52 Advanced Dairy Services Chevrolet for Jimmy Means Racing. Both cars were rolling again before Jackson’s teammate Chad Finchum, whose crew worked frantically to get his #13 Mohawk Market Toyota back on the track. Finchum’s engine fired, and he joined the grid by one lap to go signal.

When the race started, Jackson had slotted in at the tail end of the field, 4.657 seconds back of the lead. By the end of Lap 1, he’d dropped Viens to last, and the #47 drafted behind both Jackson and Massey. The Harmon team had to remind Viens to remain in line, however, as he started to lose some ground to the two cars in front.

Meanwhile, bad luck once again found Ryan Sieg. While running among the leaders in his #39 CMRRoofing.com Chevrolet, Sieg cut a tire and scraped the wall in the second corner. He avoided serious damage, but didn’t draw the caution, and had to make a green-flag stop for two tires. Sieg was understandably furious as he’d start the race nearly two laps down: “Fucking bullshit,” he said over the radio. “Fucking every week. Hope we just ran over something.” Things didn’t go much better on the ensuing run. The moment after NASCAR cleared him for reaching minimum speed, the right-front went down again, and he struck the wall once more. With just seven laps complete, Sieg pulled behind the wall, but by narrowly clearing the “Crash Clock” was able to complete repairs. Both Brian Keselowski and the team looked to an issue with the sway bar arm pushing on the tire.

On Lap 16, Sieg returned to the track, ten laps down. He finally completed his sixth lap of the race on the 17th circuit, and lost another lap to put him 11 behind. As the field moved past him in the closing laps of Stage 1, he was briefly in a five-wide situation on the apron as the leaders passed to his right.

Next to find trouble was Jesse Little, who was reported off the pace in the final five laps of Stage 1. “Smoke coming out,” said someone on the JD Motorsports crew as Little’s #4 Skuttle Tight Chevrolet pulled down pit road. He lost a lap - and nearly another - before returning to the track just seconds before the end of the stage with Sieg still in last place. For some reason, Sieg earned the Lucky Dog instead of Little, who had to wait until the end of Stage 2 to pass the pace car. By then, the last-place battle had been settled.

At the start of Stage 2, Jackson was told to drop to the tail end of the line and prepare to come down pit road. When the green flag dropped on Lap 30, Jackson was still on the lead lap and had worked his way between 30th and 33rd place, putting a few lead lap cars behind him. Regardless, on Lap 32, Jackson was guided to pit road, then to the entrance of the garage. On Lap 38, NASCAR confirmed Jackson was out with “overheating” issues, and he took last from Sieg on Lap 42.

Sieg managed to climb to 30th at the finish while Little earned two Lucky Dogs before finishing 13th.

Finishing 38th was Matt Mills, who in the early laps followed team owner B.J. McLeod and his two teammates in a trailing four-car pack. Mills ultimately made it just 65 laps in his #5 J.F. Electric Toyota before he, too, retired with overheating issues. Finishing 37th was Riley Herbst, who wrecked in the tro-oval on Lap 77, destroying his #18 Monster Energy Toyota. NASCAR reported Herbst was out under the Damaged Vehicle Policy when he pulled into the garage. Viens took 36th, though after clobbering the Turn 2 wall managed to return to the track before his wounded #47 fell out of the race. Rounding out the group was last-place starter Colin Garrett, who suffered a frightening wreck on Lap 96 after he struck a spinning Kody Vanderwal. After a string of bad luck with early engine woes, Vanderwal was out from crash damage, left in 31st place.

One underdog team that rebounded on Saturday was Our Motorsports, which wrecked at Bristol and Homestead, then parked a backup car from B.J. McLeod Motorsports in the second Homestead event. Driving the Fr8 Auctions Chevrolet, Brett Moffitt earned the team’s first-ever top-five finish by taking 5th, having run in and around the Top 10 for much of the afternoon.

Gray Gaulding rejoined SS-Green Light Racing in the race he nearly won last year. He was caught in the middle of the day’s biggest accident on Lap 105 but emerged largely unscathed, taking the 8th spot at the finish in his #07 Walk-Ons.com Chevrolet.

One spot behind him was Alex Labbe, whose two DGM Racing teammates Josh Williams and Caesar Bacarella were eliminated in the same Turn 3 crash that took out Vanderwal and Garrett. Driving the #36 Lakes Wales High School Class of 2020 Chevrolet, Labbe took the 9th spot, improving on his season-best 10th-place run in this year’s Daytona opener.

Just outside the Top Ten came Brandon Brown, who also ran inside the Top 10 for much of the race, but had to overcome significant damage in the Lap 105 wreck. Brown still managed to finish 11th in a race that saw 23 drivers finish on the lead lap. Included among them was hard luck Tommy Joe Martins, whose #44 AAN Adjusters Chevrolet recovered from rear-ending Robby Lyons to finish 15th – the team’s best run of the season, improving on their 18th at Fontana. 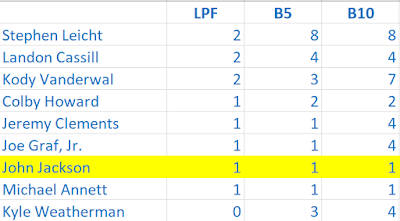 Thank you...always the best explanation of the cars we never hear about..