Brandon Jones picked up the 3rd last-place finish of his NASCAR XFINITY Series career in Sunday’s Pocono Green 225 at the Pocono Raceway when his #19 Toyota Service Centers Toyota wrecked without completing any of the 91 laps.

When Jones last ran at Pocono, he’d made it just six laps into the race before he spun out of a battle for 4th spot, backing him into the outside wall. It was the latest frustrating chapter for the driver, who struggled to find consistency despite fast Joe Gibbs Racing equipment. He still managed to make the Playoffs, but ironically it was only after he’d been eliminated in a wreck with teammate Harrison Burton that he finally broke through with his first victory the next week in Kansas. As it turned out, this wouldn’t be the only time he’d experience the highest of highs and lowest of lows so close together.

The next time it happened was this past February in Fontana. Jones won the pole and swept the first two stages, leading 73 of the 150 laps. But he hit the wall in the middle stages and tumbled to a disappointing 30th-place finish. Then, right on cue, he bounced back in the following round at Phoenix. Racing the heavily favored Kyle Busch in another Gibbs car, Jones not only kept pace with Busch, but found a way past with 20 laps to go. Just like that, Jones had his second career victory, another spot in the Playoffs, and was 28 points out of the lead.

Heading into his return to Pocono on Saturday, Jones had finished outside the Top 20 just once since his Phoenix win, including four straight runs of 8th or better. During that streak, he came up just short of beating Chase Briscoe for the second race of the Homestead double-header. Pocono would give Jones the chance for a different kind of double-duty. Busch tabbed him to drive his #51 in the 150-mile Truck Series race, Jones’ first start in the series since last fall’s runner-up at Phoenix. When the race was postponed to early Sunday morning due to rain, Jones would run both races back-to-back. Jones capitalized, avoiding several wrecks and bumping past Sheldon Creed on the final lap to take the victory – his first in 46 series starts. He then immediately prepared for the XFINITY race, where he drew the 7th starting spot.

Starting last was Stephen Leicht, who was back behind the wheel of Motorsports Business Management’s #66 Jani-King Toyota after John Jackson ran for MBM at Talladega. With both Leicht and Jackson finishing last in their respective races, another early exit on Sunday would have given the team three in a row. He’d be joined in the rear by 15th-place starter Jeffrey Earnhardt in the #0 EcoVirux Chevrolet and 16th-place Carson Ware in the #07 Jacob Construction Chevrolet, both docked for unapproved adjustments. Intervals on the leaderboard indicated two other teams dropped to the rear voluntarily – 30th-place Jeff Green in the #93 RSS Racing Chevrolet and 28th-place Kody Vanderwal in the #52 Advanced Dairy Services Chevrolet.

Ultimately, Leicht would pull behind Green, Vanderwal, Earnhardt, and Ware to retain the last spot for the start of the race. When the green flag dropped, Leicht soon passed Green for 39th, as Green quickly discovered his car had a loose rear track bar. As Green tried to hang onto his car, trouble broke out up front. Coming off Turn 1, Jones was on the inside of a tight three-wide battle with Daniel Hemric and Ross Chastain when Austin Cindric gave Jones a light bump at the apex, sending the #19 spinning to the left. It happened at exactly the wrong time – Jones struck the inside SAFER barrier with the left-front with little chance to slow down. The car bounced back onto the apron, then spun to a stop. Jones walked away uninjured, but just minutes after his #51 truck officially cleared inspection, he’d secured the last-place finish.

As in the Truck Series race, several crashes slowed the action and filled the Bottom Five within the first 20 laps. As Green continued to struggle with his loose sway bar on the restart from Jones’ crash, he immediately had to slow down after Joe Graf, Jr. in the #08 Bucked Up Energy Chevrolet collided with Josh Williams in the #92 General Formulations Chevrolet.

Several drivers at the time complained of oil in the first corner, though NASCAR’s spotter in the corner claimed he saw nothing of the sort. At the same time, Brandon Brown’s #68 BMSraceteam.com Chevrolet was reported to be dropping fluid from what was revealed to be a ruptured oil tank. Brown went behind the wall after 7 laps, and NASCAR spent an extended red flag period cleaning up the oil they hadn’t seen.

Rounding out the group was Jones’ Gibbs teammate Harrison Burton, who clobbered the same Turn 1 wall on Lap 15, destroying his #20 Dex Imaging Toyota. Green pulled off the track soon after the ensuing restart, though the results indicated a power steering issue was to blame rather than the loose sway bar reported on team radio.

While several drivers struggled – including many like Jones who drove for top teams – several underdogs found their way through the carnage and earned strong finishes.

Jeremy Clements finished 3rd in his #51 Fly and Form Chevrolet, his best XFINITY Series finish since his win at Road America three years ago. Prior to Sunday, Clements had finished no better than 15th in four previous Pocono starts.

Timmy Hill finished 8th, charging into the Top 10 during the overtime finish, for his second top-ten finish of the year and first since the season opener at Daytona. Prior to Sunday, he’d finished no better than 19th in an XFINITY race there.

Kyle Weatherman took 15th in Mike Harmon’s #47 Back The Blue Chevrolet, bouncing back from two disappointing mechanical issues in the Homestead double-header after he contended for stage points in both races. Weatherman improved on his own previous career-best, a 22nd last fall in Kansas.

Kody Vanderwal and Jimmy Means Racing also turned around a rough start to their first season together as the rookie finished 19th in the #52 Advanced Dairy Services Chevrolet. Vanderwal’s previous best was a 21st at Bristol, and he’d failed to finish the following four straight races before his run on Sunday.

Perhaps most impressive was Johnny Davis’ multi-car underdog team, JD Motorsports. Top of the class was Jesse Little, whose #4 Chevrolet held on to finish 10th, his first career top-ten finish in his 12th series start. Ryan Vargas, making just his fourth series start, nearly scored a Top Ten of his own and finished 13th in the #15 Carnio Care Bears / Faces Chevrolet. This bested Vargas’ previous career-best of 17th at Iowa. B.J. McLeod in the #6 restarted 4th in the final laps, looking to get back the Top Ten that slipped away from him at Bristol. Again, he held on well into the final moments, but took the checkers in 14th – his best XFINITY finish since Bristol and fourth-best overall. Jeffrey Earnhardt took 16th in the #0 EcoVirux Chevrolet, which while not a career-best finish, put all four Davis cars inside the Top 20.

LASTCAR STATISTICS
*As of this writing, it is yet unclear whether this was the first time a driver won a NASCAR national touring series race and finished last in another on the same day. 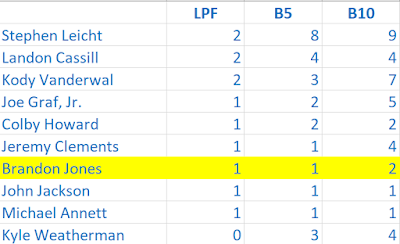