Kody Vanderwal picked up the 2nd last-place finish of his NASCAR XFINITY Series career in Saturday’s Hooters 250 at the Homestead-Miami Speedway when his #52 Advanced Dairy Service Chevrolet fell out with a blown engine after 32 of 167 laps.

Following their early struggles in Atlanta, Vanderwal was set to rebound in Jimmy Means Racing’s #52 Chevrolet. He drew the 32nd starting spot in a field of 37.

Rolling off 37th was Colin Garrett, whose Sam Hunt Racing team made their debut at this same Homestead track last fall. Garrett was himself running his first XFINITY race since the series’ return at Darlington, and had to index the wheel on his #26 Rosie Network / R4H Toyota. After a momentary pause for Caesar Bacarella’s window net getting locked in place on the #90 Alpha Prime / Maxim Chevrolet, the field rolled off pit road.

While no drivers incurred pre-race penalties to drop him to the back, the pace laps proved unusually busy. In a frustrating twist, it was Vanderwal who first had issues for a second consecutive race. Once again, his car was smoking, and other drivers were once more reporting the issue to NASCAR Officials. “There’s a little bit of smoke in the cab, but it’s clearing up,” said Vanderwal. “It was never really bad at all.”

At the same time, NASCAR was scrambling to pick up debris. Chase Briscoe, set to start 8th in his #98 Ford Performance Racing School Ford, had dropped what appeared to be frame rail spacers for the tungsten ballast. This forced Briscoe to pit road, where he missed the start for quick repairs. Then, the Martins Motorsports crew stood atop pit wall for Tommy Joe Martins’ #44 Gilreath Farms Red Angus Chevrolet, which was also reporting smoke. The alternator wire had grounded on the head, causing it to short out. The team had to tie back the wire, and at least one crewman climbed through the passenger window. Martins was reported behind the wall on Lap 3 for a mechanical issue, having missed the start along with Briscoe. Martins held last place with Briscoe in 36th.

On Lap 7, Briscoe returned to the track, six laps down. Moments earlier, NASCAR reported Vanderwal’s #52 was smoking in the corners. On Lap 18, Martins returned to the track and completed his first lap. The competition caution fell moments later, and Martins was told to turn off all fans except the helmet and the radiator. Martins had already planned to run a conservative race as his backup had no laps on it, but now looked to run “slightly above minimum speed” while saving tires for Sunday’s double-header.

Lap 23 saw Vanderwal make his first trip to the garage for a mechanical issue. The driver was unclear on the issue, but said the battery wasn’t dead. He returned to the track multiple laps down on the 27th circuit. By then, he reported “It ain’t going very well, it may be down a cylinder.” Things went from bad to worse on Lap 38, when the car erupted in smoke down the backstretch, drawing the caution flag. Vanderwal pulled behind the wall, the crew reporting “We’re done.” The team reported they will go to a backup car for Sunday's second 250-mile race on the Homestead track.

Vanderwal took last from Martins on Lap 51. On Lap 72, NASCAR Officials confirmed Vanderwal was out with engine woes. Also declared out was Stephen Leicht, who was on the lead lap when he pulled behind the wall in his new bright blue-and-orange #66 Jani-King Toyota Supra. Taking the next two spots were Brett Moffitt and Vinnie Miller, who tangled on Lap 58 when Miller’s #78 Koolbox Chevrolet dove under Moffitt’s #02 Robert B. Our Co. Chevrolet entering Turn 3. The two tangled with Miller soon flagged off the track under the Damaged Vehicle Policy. Moffitt made it two more laps and dropped fluid on pit road before his race also ended.

Rounding out the Bottom Five was Kyle Weatherman in the #47 #BackTheBlue Chevrolet. Weatherman was one of the day’s most surprising runs as he took tires toward the end of Stage 1, allowing him to charge to 6th at the end of Stage 1. He then stalled on pit road and dropped to 30th, then pulled behind the wall on Lap 61. Curiously, he then returned to the track on Lap 129 and ran until Lap 137, but never climbed past the 33rd spot. Teammate Bayley Currey saw his streak of Top 20 finishes end at three, but he still managed to finish in 24th.

Joining Weatherman with strong runs in Stage 1 were Alex Labbe, who reached the Top 5 in Mario Gosselin’s #36 Globocam / Rousseau Chevrolet and held that spot at the end of the stage. Slipping into the Top 10 was Daytona last-place finisher Joe Graf, Jr., who earned his first stage point of the season in SS-Green Light Racing’s #08 Bucked Up Energy Chevrolet. Graf finished best of the surprises in Stage 1, taking 16th at the finish ahead of Labbe in 25th.

Finishing just outside the Top 10 in 11th was Graf’s teammate J.J. Yeley, who this weekend shares SS-Green Light’s #07 Chevrolet with Carson Ware. The finish set a new season-best for Yeley, improving on his 12th-place run for Jimmy Means in the Daytona opener. 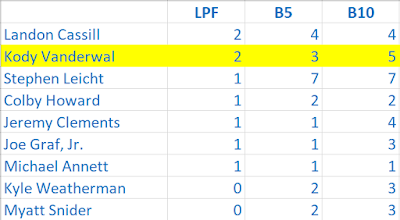