(Special thanks to William Soquet, our Guest Contributor, for tracking this race’s last-place battle. Be sure to follow him on Twitter at @WilliamSoquet for more underdog coverage in the ARCA Menards Series.)

Matt Kenseth picked up the 4th last-place finish of his NASCAR Cup Series career in Monday’s GEICO 500 at the Talladega Superspeedway when his #42 McDonald’s Chevrolet fell out with a rear hub failure after 127 of 191 laps.

The story of Kenseth’s return to Cup Series competition is well known. After losing his Joe Gibbs Racing ride to Erik Jones in 2017, then running a 15-race schedule for his former employer Roush-Fenway Racing in 2018, Kenseth was out of a ride for more than a year. But all that changed this past April, when Chip Ganassi Racing released Kyle Larson for uttering a racial slur in a livestreamed sim race. While Ross Chastain and Jamie McMurray were among the candidates, they hired Kenseth, who would return for NASCAR’s resumption of the season at Darlington in May. Despite the lack of practice and qualifying, Kenseth finished 10th.

In the races since, however, Kenseth has finished no better than 15th, which came at Atlanta. On more than one occasion, he’s had issues on pit road. But coming into Talladega, he had yet to score a single DNF in 2020. At Talladega, he drew the 13th spot. He would run the team’s red McDonald’s car, a sponsor that hadn’t reached victory lane in NASCAR since 1994, when Jimmy Spencer took the checkered flag in another hot summer race at Talladega driving for Junior Johnson.

Drawing the 40th and final starting spot was Garrett Smithley, who was swapped into B.J. McLeod’s bright red #78 Baker Camp Arnold Capital Management Chevrolet that McLeod was originally going to drive himself. Instead, McLeod reunited with Spire Motorsports after NASCAR rescinded their approval of James Davison to make his Cup debut in the #77 Oil Fire Rye Whiskey Chevrolet.

Both McLeod and Smithley were among the six drivers who incurred pre-race penalties – Smithley for two inspection failures and McLeod for unapproved adjustments. Also nabbed for unapproved adjustments were Brendan Gaughan, slated to start 39th in the #62 Beard Oil / South Point Chevrolet, and 37th-place Daniel Suarez in the #96 CommScope Toyota. William Byron’s #24 Axalta Chevrolet failed inspection twice while Joey Gase failed three times in Rick Ware Racing’s #51 The Gifted Life Podcast Ford. This meant Gase would have to incur a pass-through penalty at the start of the race. By the time the field addressed the starter’s stand, however, it was Byron who lined up in the final starting spot.

When the green flag dropped, Byron moved past Gaughan, who was four seconds back at the start. Gase then served his pass-through penalty and remained on the lead lap, though completely by himself a full 26 seconds back of the lead. By Lap 3, he was 34 seconds back. J.J. Yeley, Gase’s teammate in the #53 Truckworx Chevrolet, started to lose touch with the pack by Lap 4, and had dropped 14 seconds back. On Lap 6, the leaders caught the trailing Gase, who pulled into the high lane and became the first to lose a lap. For the rest of the afternoon, this high lane was where lapped traffic attempted to stay out of the way of faster cars. First Yeley, then Smithley both lost laps of their own by Lap 14.

On Lap 23, Gase passed Yeley for 39th, putting Yeley’s #53 into the last spot. He would hold that position for much of the race. On Lap 26, just seconds before the competition caution, Yeley lost a second lap going into Turn 1. Yeley was also the first to go to the garage area, citing a mechanical issue near the end of Stage 1. As Stage 2 began following a caution for rain, Yeley returned to the track ten laps down. Back up to speed, he linked onto a two-car draft of both McLeod and the #00 Permatex Chevrolet of Quin Houff. This group was lapped by the leaders on Lap 91, putting Yeley an 11th lap back.

Kenseth, meanwhile, was running mid-pack on the same lap as the leaders when trouble found him on Lap 128. Heading down the backstretch in the inside line, he unexpectedly jumped out of line and slowed, saying he’d lost the brakes. He managed to come to pit road and lost a lap before heading to the garage area. Later reports said it was either a brake issue or a problem with the track bar. The team set to work, and he wasn’t listed out for several laps. He took last from Yeley on Lap 139, then was listed “out” of the race on Lap 170.

Yeley ultimately climbed to 36th at the finish after other drivers faced late-race trouble. Finishing 38th and 39th were Chase Elliott in the #9 Mountain Dew / Little Ceasars Chevrolet and Austin Dillon in the #3 Bass Pro Shops / Tracker Off Road Chevrolet. Elliott was running 3rd on Lap 134 when he was squeezed between Penske teammates Joey Logano and Brad Keselowski, causing Keselowski to turn Elliott into the outside wall. Dillon was the only other driver involved when his right-front struck the left-rear of Elliott’s car. Dillon fell out under the “Damaged Vehicle Policy” while Elliott managed to limp around the track for two more laps before he pulled into the garage. Gase took 37th after his #51 tagged the Turn 4 wall in a wreck with Brennan Poole on Lap 142. Poole had run 15th on Lap 66 and led on Lap 97 before damage to his #15 Remember Everyone Deployed Chevrolet took him out in the final laps.

In the final charge to the checkered flag, John Hunter Nemechek made a daring bid for the lead, pushing Erik Jones to the runner-up spot and nearly forcing a three-wide drag race to the finish line. Unfortunately, Nemechek’s #38 Death Wish Coffee Ford made contact with Jones, putting both in the wall to leave them 5th and 8th. Nemechek’s 8th-place run was still a new career-best, improving on his strong 9th in NASCAR’s return at Darlington in May.

Also of note was Daniel Suarez, who worked his way to 8th in the final 50 laps after he’d incurred his pre-race penalty. Suarez ultimately slipped to 28th at the finish, one lap down.

LASTCAR STATISTICS
*This marked the first last-place finish for the #42 at Talladega since April 29, 2018, when Kyle Larson’s Credit One Bank Chevrolet crashed after 71 laps of the GEICO 500.
*The only other time car #42 finished last in a NASCAR race due to any kind of hub failure was on October 25, 1954, when Lee Petty’s Chrysler fell out after 12 laps at North Wilkesboro. It was Petty’s first career NASCAR last-place finish and came in the season finale, the Wilkes 160, where Petty had already locked-up his first of three Cup Series Championships. For more on last-place hub failures, check out the statistics below:

HUB FAILURES IN LASTCAR CUP SERIES HISTORY
While Kenseth’s last-place finish is the first due to a “rear hub,” it is actually the fifteenth where a hub was the listed cause. A general “hub” failure arose in six instances, but hasn’t arisen since May 30, 1976, when Terry Ryan fell out after 11 laps of the World 600 at Charlotte. This was the most recent of all last-place finishes caused by a hub failure in NASCAR history. A hub has not yet been a listed reason for an XFINITY or Truck Series last-place finish.

The remaining eight instances of last-place hub failure all specified which of the four hubs broke. Interestingly, all but one of them occurred on the right side. A “right-front hub” occurred five times, most recently September 15, 1960 to Doug Yates at Gamecock (South Carolina) Speedway after 34 laps. A “right-rear hub” occurred twice, most recently July 8, 1965 at Old Dominion (Virginia) Speedway, where Darel Dieringer retired after 38 laps.

The lone “left-front hub” occurred August 24, 1965 at Dog Track (North Carolina) Speedway to Tom Pistone after one lap of the Moyock 300. If Kenseth’s last-place finish was caused by the “left-rear hub,” it would have been the first such instance in NASCAR’s last-place history.
UPDATE (June 25, 2020): After contacting Chip Ganassi Racing, there was no new information on the cause of the hub failure, but scanner audio indicated the crew was working on the left side, indicating the "rear hub" was likely the first "left-rear hub." 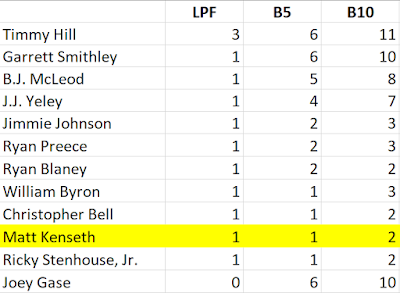