Timmy Hill picked up the 12th last-place finish of his NASCAR Cup Series career in Wednesday’s Blu Emu Maximum Pain Relief 500 at the Martinsville Speedway when his #66 CrashClaimsR.us / James Carter Attorney Toyota fell out with fuel pump issues after 105 of 500 laps.

Following the suspension of the season following his most recent last-place run at Phoenix, Hill became one of the biggest stars of the eNASCAR iRacing Pro Invitational Series. Using perhaps the least expensive computer setup, the veteran sim racing competitor finished 3rd in the series opener at Homestead, then bumped William Byron at Texas to take the victory. Hill finished no worse than third in six of the seven sim races, excepting only an 11th-place finish at Talladega. A diecast was produced of his Texas-winning sim car, and his current sponsor RoofClaim.com pledged additional support to his Cup and XFINITY efforts with Motorsports Business Management.

When the series returned to action last month at Darlington, Hill finished 33rd, and would run no better in each Cup race until two weeks ago at Bristol. There, Hill managed not only his first lead-lap finish of 2020, but took a strong 19th. It was the second-best finish of his Cup Series career, trailing only his 14th-place run with MBM at Indianapolis in 2017. The next night, Hill finished 14th in the XFINITY Series race there for another lead-lap finish, his second-best run to a 3rd in this year’s Daytona opener.

Hill arrived in Martinsville in what appeared to be the same black-and-white Pit Boss Grills car from Bristol, though this time with CrashClaimsR.us on the quarter-panels. With the withdrawal of B.J. McLeod and his #78 team, Hill drew the 38th starting spot in the 39-car field.

Rolling off last in the field was Reed Sorenson, who took the controls of the unsponsored Tommy Baldwin Racing #7 Chevrolet. He would be shortly joined by 36th-place starter Joey Gase, whose Rick Ware Racing entry debuted new sponsorship from Carolina Sim Works, but unfortunately failed inspection five times. This meant Gase would have to serve a pass-through penalty before the start. Gase dropped to the back before the start, and was reminded he had to take the green flag at the start/finish line before he slowed on the backstretch to enter pit road. Gase did this at the start and lost a lap, hoping for a caution.

When the race started, 22nd-place starter Austin Dillon ran over something with his right-rear tire of his #3 Symbicort Chevrolet, and immediately struggled to make his way around the track. He managed to limp around until Lap 5, when the caution fell after his tire let go, dropping debris on the track. Dillon made it to pit road, where the crew removed crush panels while changing the tires. Gase’s team was thrilled, as Dillon’s caution secured Gase the Lucky Dog. Someone on the 51 team said, “Imagine that – something went our way this week!” No sooner had the words been said, when as Gase passed the pace car on Lap 9, something came off Gase’s car. The team thought it was a spring rubber, but it appeared to be an electronic device with cables sticking out of it. The object appeared smaller than a battery, and was unlikely to be the team’s transponder as Gase’s scoring continued uninterrupted.

By Lap 40, last-place Austin Dillon was on the same lap as the race’s new 38th-place runner, Quin Houff, in the #00 Permatex Chevrolet. Soon to join them was Garrett Smithley, who had started 35th in Spire Motorsports’ #77 Formula One Imports Chevrolet. On Lap 47, Smithley reported he had lost the brakes, and he cut across the track in Turn 4 to dive onto pit road. Rolling down pit road with a small fire behind the left-front wheel, Smithley pulled into the garage at the Turn 4 entrance and stopped next to two haulers. The crew set to work bleeding the brakes, and promptly took last from Dillon.

On Lap 74, Smithley re-fired the engine, and returned to the track by Lap 77. He also had to serve a pass-through penalty for his commitment cone infraction for cutting across the track during the brake issue. As Smithley continued to fine-tune his setup, addressing a tight condition in the center, Timmy Hill was enjoying another solid run. On Lap 78, he was in 20th, holding on as the last car on the lead lap, 15.86 seconds back of the lead. Team owner Carl Long was enthusiastic on the radio, encouraging his driver onward.

But while coming down pit road just before the end of Stage 1, Hill stalled on pit road. The caution flew on Lap 114 as the car was eventually pushed to the garage. The team checked readings on fuel pressure, then traced the issue to the fuel pump. Unfortunately, Long said they didn’t have a replacement pump. Hill climbed out of the car around Lap 116, and the crew continued to work, even when it was clear not much more could be done. One crew member summed up the emotions perfectly: “That's a damn shame, we drove up to the Top 20 in a good car and it goes to shit.” Around Lap 152, Hill took last from Smithley.

On Lap 154, Joey Gase returned to the track from a trip to the garage of his own, which occurred during Hill’s misfortune. Gase lost power around Lap 135, when NASCAR Officials reported he’d gone to the garage for a mechanical issue. He returned to the track on Lap 154 and climbed his way up to 35th at the finish, one spot ahead of Smithley. Taking 37th was Austin Dillon, whose lost crush panels took their toll. From the Lap 6 incident onward, Dillon struggled with blazing heat and carbon monoxide poisoning. He continued to fight to get back on the lead lap until nearly the final 100 laps, when he pulled onto pit road complaining of dizziness. With no relief drivers on hand – including A.J. Allmendinger, who was originally scheduled to be on stand-by as Dillon awaits the birth of his first son – the #3 was done for the night.

LASTCAR STATISTICS
*The now eight times the #66 finished last in a Cup race at Martinsville have all been with different drivers. Hill joins Roy Tyner (1958), Rick Mast (1989), Lake Speed (1991), Darrell Waltrip (2000), Todd Bodine (2001), Hideo Fukuyama (2002), and Joe Nemechek (2014).
*Hill is the first driver to finish last at Martinsville due to a fuel pump issue since October 28, 1956, when Jimmie Lewallen’s 1956 Ford fielded by Bob Welborn fell out after 11 laps of the Old Dominion 400. The only other time it’s occurred at Martinsville was on October 13, 1953, when a faulty fuel pump stopped Herb Thomas’ “Fabulous Hudson Hornet” after 28 laps, handing Thomas his first career last-place finish. 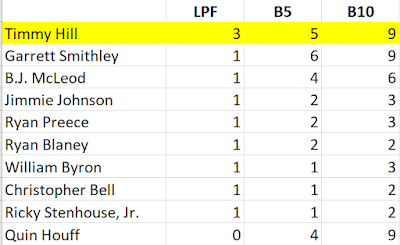 May need a special LASTCAR for Jason Beam & Ray Ciccarelli.