Quin Houff picked up the 2nd last-place finish of his NASCAR Cup Series career in Saturday’s Pocono Organics 325 at the Pocono Raceway when his #00 Mane ‘n Tail Chevrolet fell out with crash damage for failing to clear the damaged vehicle policy after 19 of 130 laps.

Houff enters his second Cup Series season and his first as a full-time driver. Last year, he made 17 series starts with Premium Motorsports and their sister team Spire Motorsports. While he finished no better than 28th, which came in the Coca-Cola 600, his second-best actually came at Pocono, where he drove the Spire car to a 29th-place run in June.

It was a surprise to some, that Houff was then signed by StarCom Racing to a full-time ride in 2020. He took the place of Landon Cassill, who in two seasons helped the team improve after they acquired a Charter. Cassill has done the same for Shepherd Racing Enterprises in the XFINITY Series, but has been off the track since May as the team continues to struggle with sponsorship issues.

Houff made his first start for StarCom Racing in this year’s Daytona 500, where his car honored the 30th anniversary of team owner Derrike Cope’s upset win in the 1990 running of “The Great American Race.” Unfortunately, he was eliminated in a crash when he was turned into the outside wall by Aric Almirola just short of the halfway point, leaving him 39th in a field of 40. He improved on his career-best Cup finish with a 26th in the midweek race at Darlington, then nearly matched it with a 27th and both Bristol and just last week in Talladega.

At Pocono, Houff would carry Cope’s longtime sponsor Mane ‘n Tail Shampoo, which happens to be celebrating its 50th anniversary this season. Houff drew the 32nd starting spot in the 40-car field.

Drawing the last starting spot was Josh Bilicki, who rejoined Tommy Baldwin Racing with Bilicki’s familiar Insurance King paint scheme on the #7 Chevrolet. Bilicki incurred a redundant tail-end penalty for unapproved adjustments, and would be joined by 27th-place starter Brennan Poole for the same penalty on his #15 Remember Everyone Deployed Chevrolet.

During the extended pace laps as the field waited out the rain, there were concerns around 7th-place starter Kurt Busch after his #1 Monster Energy Chevrolet ran over a wheel chock on pit road with his right side tires. Busch didn’t come down pit road, so he did not fall to the rear with Poole and Bilicki.

When the race started, the last spot fell to B.J. McLeod, who was driving his bright red #78 Koolbox Chevrolet. Rick Ware Racing reported McLeod has leased his cars from his team, and this same red car last ran at Atlanta, where he finished last after early clutch issues. As McLeod completed the first lap, another Ware car belonging to 28th-place Joey Gase reported issues with the engine. The exhaust note sounded flat to the spotter, and Gase lost significant ground on the track’s long straightaways. By the end of that lap, Gase had fallen to 39th in front of McLeod, and both were 1.231 seconds behind 38th-place James Davison, making his Cup debut in the Spire Motorsports #77 Oil Fire Rye Whiskey Chevrolet.

Gase took last from McLeod on Lap 3 as the team prepared to diagnose the issue under the hood. The original plan was to summon the team’s engine specialists and pit under the competition caution on Lap 11. Concerned they wouldn’t make it that far, they called Gase to pit road on Lap 4. At the time, he was 6.085 seconds back of 39th-place McLeod and 24.872 seconds back of race leader Aric Almirola. Gase shut off the engine, and the crew discovered at least two loose and burned plug wires. Gase returned to the track on Lap 7, and was on the verge of four laps down. Fortunately, his speed had greatly improved, and his spotter eagerly cheered his driver onward.

Gase was still in last place when the race restarted. Houff, meanwhile, was racing still another Ware car, the #27 Red Rock Secured Ford of J.J. Yeley. On Lap 17, Houff got under Yeley in treacherous Turn 2 when he broke loose and spun at corner exit. Houff slid to the apron and nudged the inside wall with the left-front corner. Houff managed to get rolling again, but was mindful of NASCAR’s “Crash Clock,” knowing if he pulled into the garage, he’d be parked for the day.

Shedding debris as he came down pit road, Houff reached his stall where the crew made repairs. The team removed the left-front wheel to adjust the suspension, and also applied bear-bond. When Houff returned to the track on Lap 19, however, the driver reported a bad vibration. Team owner Derrike Cope got on the radio and told Houff to pit again, saying “if it’s got a vibration, it won’t get better.” Houff returned to pit road a second time for another look behind the left-front and under the hood, examining the tie rod, sway bar, and shocks.

With less than two minutes left on the “Crash Clock,” Houff was sent out again to try and reach minimum speed. Unfortunately, the vibration was as bad as ever, causing his voice to shake over the radio. The team made the call to go to the garage, which he did on Lap 22. Out under the Damaged Vehicle Policy, Houff took last from Gase on Lap 24, then was declared out by NASCAR on Lap 34. The team will roll out a backup car for Sunday’s race.

Gase ultimately climbed to 37th. The first car he passed was McLeod, who pulled behind the wall on Lap 37. His crew reported on Lap 50 that the transmission “popped out of gear and hit the chip.” They also reported no apparent fluid under the car as they prepared it to run again on Sunday. Erik Jones took 38th in his #20 Craftsman Toyota following a hard crash near the entrance to pit road after he and rookie Tyler Reddick came together off Turn 3. Rounding out the group was Joey Logano, whose #22 Shell / Pennzoil Ford lost multiple laps in the final moments after a left-front tire went down on the short chute.

Finishing 4th was Christopher Bell, who capitalized on Reddick’s misfortune in the Rookie of the Year battle by scoring his first Top 5 finish in just his 14th career start.

Michael McDowell followed up his strong run at Martinsville with an 8th-place finish, leading a lap during the final exchange of pit stops in his #34 Dockside Logistics Ford. The finish is McDowell’s new season-best and his fourth straight finish of 18th or better, all of them on the lead lap. Prior to Saturday, McDowell had finished no better than 16th in a Cup race at the track, which came in 2018.

LASTCAR STATISTICS
*This marked the first last-place finish for the #00 in a Cup Series race at Pocono.
*StarCom Racing had not finished last in a Cup Series race since September 8, 2019, when Landon Cassill’s run in the #00 Sherfick Companies Chevrolet ended with a hard crash after 40 laps of the Big Machine Vodka 400 at the Brickyard. 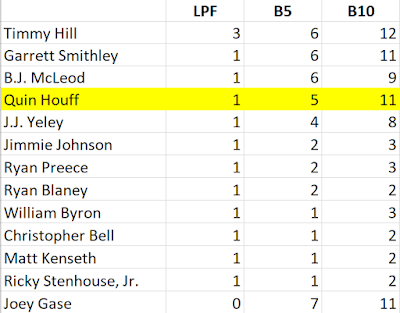