B.J. McLeod picked up the 5th last-place finish of his NASCAR Cup Series career in Sunday’s Folds of Honor QuikTrip 500 at the Atlanta Motor Speedway when his #78 Circle Track Warehouse Chevrolet fell out with clutch issues after 3 of 325 laps.

When NASCAR returned from its two-month hiatus in May, B.J. McLeod revealed he would be fielding a Cup Series team for the very first time. McLeod’s team B.J. McLeod Motorsports had been fielding cars in the XFINITY Series since 2016, and in their inaugural season he drove the flagship #78. He’s since worked his way into the Cup Series driving for Rick Ware Racing and run XFINITY for JD Motorsports, freeing up his now three-car XFINITY program for a series of up-and-coming drivers. Just last week at Bristol, both Vinnie Miller, now the driver of the #78, and McLeod were in position to finish in the Top 10 before taking 11th and 12th.

McLeod’s current Cup program came about following the merger between Rick Ware Racing and Premium Motorsports, which also allowed Tommy Baldwin Racing to re-enter the series for the first time in more than a year. At Darlington, McLeod would run his same #78 with sponsorship from Christensen Arms, which backed his run for Ware in this year’s Daytona 500. Unfortunately, the car slowed on the backstretch after just 13 laps, leaving him 39th with engine trouble. He then ran all but six laps in Wednesday’s 208-lap affair, finishing 36th, and improved further with a 32nd in the Coca-Cola 600. By then, he was running a Ford in place of the Chevrolet from his first two starts.

After a 35th-place run in the second Charlotte race, McLeod was running laps down in the 27th spot, a new season-best, and was just 13 laps from finishing the race under power once more. While running the low line, he was then caught by race leader Denny Hamlin, who was fending off a fast-closing Joey Logano and Chase Elliott. McLeod held his line off the second corner as Logano and Elliott threaded the needle entering Turn 3. But when Logano broke loose, Hamlin lose control and spun down the track. He collected McLeod, putting both cars hard into the inside wall. Unable to return from the damage, McLeod lost one more spot and finished 28th.

McLeod also had serious enough damage to his Ford that he couldn’t run it in Sunday’s Atlanta race, so the team was forced to run a bright red Chevrolet built for superspeedways. Circle Track Warehouse, which backed some of McLeod’s runs as well as Jimmy Means Racing’s #52 team in XFINITY, put their logo on the hood. After the random draw, the team would roll off 39th in a field of 40.

Starting last in Sunday’s race was Reed Sorenson, who was back in a Cup car for the first time since the midweek Darlington race, where J.J. Yeley was swapped into Spire Motorsports’ #77 before the start. It also marked a bookending of the field by Georgia natives as the Peachtree City driver rolled off last while Chase Elliott drew the pole.

Multiple drivers were sent to the rear, headed by 12th-place starter Kurt Busch, whose #1 Monster Energy Chevrolet failed inspection three times, meaning he’d have to serve a pass-through penalty at the start. Joining him were 25th-place Corey LaJoie in the #32 Built Bar Ford and 34th-place Garrett Smithley in the #53 Hero Box Chevrolet, who each failed twice, and 38th-place Timmy Hill in the #66 RoofClaim.com Toyota and 31st-place Cole Custer in the #41 HaasTooling.com Ford, whose teams made unapproved adjustments.

When the race started, Sorenson and Yeley remained in the final two spots before Busch served his pass-through at the end of Lap 1. Busch returned to the track one lap down, but by around Lap 6 had already climbed a spot. That occurred after McLeod pulled into the garage after four laps. On Lap 5, NASCAR Officials reported” 78 to the garage, mechanical.” On Lap 13, the #78 crew said “We are for sure done, guys,” then “Yeah, B.J. says we’re done.” Officials then confirmed this on Lap 17, reporting “78 out, clutch.”

Long green-flag runs and low attrition meant multiple drivers were several laps down before the end of Stage 1. Taking 39th was Timmy Hill, the day’s only other retiree, who fell out in the final laps with electrical issues. Last of the cars running was Joey Gase, a full 16 laps down to the leaders in the #51 Donate Life Ford. Sorenson came home two laps ahead of Gase with Yeley one lap ahead of Sorenson following a late pit stop. Kurt Busch, who briefly held last after his pass-through penalty, recovered to finish a strong 6th.

LASTCAR STATISTICS
*This marked the first last-place finish for car #78 in a Cup Series race since September 10, 2018, when Martin Truex, Jr. lost the brakes on his #19 Auto-Owners Insurance Toyota after 41 laps of the Big Machine Vodka 400 at Indianapolis, just six days after news broke that Furniture Row Racing would close at the end of the season.
*The number hadn’t finished last in a Cup race at Atlanta since March 9, 1998, when Gary Bradberry’s Pilot Travel Centers Ford fell out with ignition problems after 12 laps of the Primestar 500.
*A Cup Series driver hasn’t finished last at Atlanta due to clutch issues since June 13, 1965, when Wayne Smith’s #38 1965 Chevrolet fell out after 6 laps of the Dixie 400. 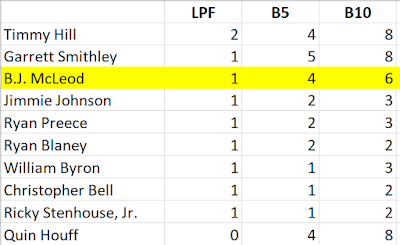