Con Nicolopoulos secured the eighth last-place finish of his ARCA Menards Series career in Saturday’s General Tire 200 at Talladega Superspeedway when engine problems prevented his #0 GreatRailing.com / Wayne Peterson Racing Chevrolet from completing any of the race’s 76 laps.
The finish was Nicolopoulos’ first last-place finish of the season and was his first since the first 2018 race at Pocono, 35 races ago.

Con Nicolopoulos is a 58-year-old engineer for Chrysler in Detroit who has a penchant for thermal dynamics. He got into ARCA at the behest of Chrysler coworker Brad Smith, first spotting for Smith at Talladega and then later testing and driving a second Smith entry at Toledo in 2011. He ran a handful of races for Smith and one race for former team owner Wayne Hixson that year before not driving at all in the 2012 and 2013 seasons.

For the 2014 season, Nicolopoulos aligned with veteran team Wayne Peterson Racing. From 2015 to 2018, he ran over half of the season before taking a step down to only four races in the 2019 season as the Peterson team focused their efforts on rookie driver Tim Richmond. Now, Nicolopoulos has returned in the capacity of a second superspeedway car in 2020. He has also worked as an engineer to produce new healthcare products during the COVID-19 pandemic.

The Talladega entry list debuted at 21 cars, and although it briefly bumped up in the middle of the week, 21 cars entered Talladega Superspeedway to race. Ryan Repko was in the Venturini Motorsports #20, Sean Corr returned in the #8, Eric Caudell was back in his #7, Brandon Lynn made his yearly Talladega appearance, this time in the #22; Jason Kitzmiller returned in the #97. Fast Track Racing rolled out four cars: Tommy Vigh Jr. in the 01, Ryan Huff in the 10, Ed Pompa in the 12, and Willie Mullins in the 11. Incidentally, Mullins' business, Crow Wing Recycling, was affected by the coronavirus pandemic and as a result, Mullins teamed up with Andy Hillenburg to get to the track.

Among those notably absent were Our Motorsports, who focused on their Xfinity Series effort; Ken Schrader Racing, which did a one-off with Natalie Decker to start the season at Daytona; and Rette Jones Racing, which had to postpone operations due to a number of team personnel, including owner and driver, residing in Canada. Some independents like J.J. Pack and Dave Mader III also did not make the trip to Talladega.

The lone practice session was held Saturday morning in groups of five cars. Riley Herbst led the field, and at the bottom was Brad Smith, over six seconds back by Herbst. The starting lineup was set by owner points. Ryan Repko was awarded the pole position and Thad Moffitt was set to start shotgun on the field.

Despite not being last in practice, Nicolopoulos still complained of motor issues. The team diagnosed it as a valve cover leak and fixed it before the race. However, the engine on the #0 machine was still running hot during pace laps. Another diagnosis by the team found a missing radiator cap, which they replaced with the one from the van that the team used to get to the racetrack. However, that was not a viable long-term solution, and as such, the #0 car retired without ever running a lap at race pace.

Brad Smith was 20th, falling out with a faulty carburetor (yes, ARCA cars still have those!) after four laps. Also falling out in the early stages of the race were Vigh, Mullins and Richmond, all citing a mechanical issue of some kind as the reason out. This meant that the Bottom Five was filled with all mechanical issues – a rare showing for a superspeedway known for multi-car accidents. 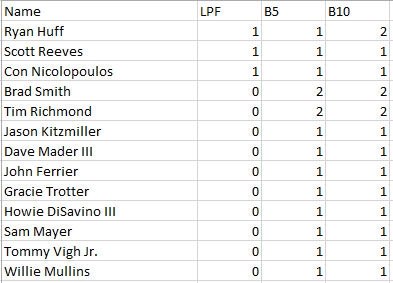