Garrett Smithley picked up the 2nd last-place finish of his NASCAR Cup Series career in Thursday’s Alsco Uniforms 500k at the Charlotte Motor Speedway when his #53 Dream Giveaway Chevrolet fell out in a multi-car pileup without completing any of the 208 laps.

The wreck, which came in Smithley’s 24th series start, was his first of the season and first in the series since June 10, 2018 at Michigan, 65 races ago. That race marked Smithley’s series debut, where he was eliminated by first-lap transmission woes in StarCom Racing’s #99 Victory Lane Quick Oil Change Chevrolet.

The 2020 season marks a significant transition in Smithley’s career as, for the first time since 2015, he is no longer a full-time XFINITY Series driver for JD Motorsports. The shift comes after a 14-race Cup schedule just last year, where he drove for the now-unified teams of Spire Motorsports, Premium Motorsports, and Rick Ware Racing. Among his sponsorship partners have been Victory Lane Quick Oil Change, which Smithley said is also trying to establish its own national presence. His best series finish remains a 28th last summer at Indianapolis, where former owner-driver Jeff Spraker served as his crew chief.

Prior to the pandemic’s pausing of the season, Smithley drove in three of the first four races of the year, finishing 35th at Las Vegas, 34th in Fontana, then 35th at Phoenix after mid-race engine trouble. He then became one of the biggest standouts of the eNASCAR iRacing Pro Invitational Series, where his Rick Ware-themed #51 Chevrolet finished worse than 9th only once in the seven-race series. He also qualified no worse than 14th in each event, including a pole position in the series opener at Homestead.

When the series returned at Darlington, Smithley was moved from Rick Ware’s #51 to the #53. He’d been slated to run the #52, which was on a chassis dyno just days before the race, but new sponsors after the Premium Motorsports merger requested their third team use the former Premium #27. Smithley ran just 37th in the Sunday Darlington race after power steering issues, then just 34th in the return on Wednesday before a 33rd in the Coca-Cola 600. It was in NASCAR’s longest race that Smithley gave Victory Lane Quick Oil Change their first start of the season.

Following the 600, Smithley would run triple-duty for all three of NASCAR’s national series, making his first race of the year in both the XFINITY and Truck Series. He was first tabbed to replace Ray Black, Jr., who surrendered his ride with SS-Green Light Racing to help his family business recover from losses suffered during the pandemic. Smithley finished 31st, ten laps down. He then ran the #40 in Tuesday’s Truck Series race for Niece Motorsports, but was spun into the inside wall before breaking the rear end, leaving him 36th in a field of 40.

Smithley’s completion of the triple-header was scheduled for Wednesday night, where his XFINITY sponsor Dream Giveaway would back the #53 team for the first time. Since he finished outside the Top 20 for the field invert, Smithley would resume his 33rd starting spot in the main event.

Lining up 40th was Jimmie Johnson, whose runner-up finish in Sunday’s Coca-Cola 600 was invalidated by a disqualification for failing OSS post-race inspection. Johnson’s #48 Ally Bank Chevrolet would be joined by 6th-place Aric Almirola for unapproved adjustments to his #10 Smithfield Ford and both 31st-place J.J. Yeley in the #77 Aquesta Bank Chevrolet and Josh Bilicki in the #7 Strutmasters.com Chevrolet for driver changes following Sunday’s 600. Bilicki slotted into the 40th spot first, followed by Almirola, who dropped back in the high line, then Yeley, who dropped below Bowyer and Johnson to fall to the rear.

When the green flag dropped, Bilicki was briefly running at or near the last spot, putting him in the middle of a sudden disaster in Turn 3. In front of him were Smithley and teammate Joey Gase, running the #51 Carolina Cooker Ford. Both were suddenly in a four-wide battle with another car as Clint Bowyer dove under them in his #14 Peak Ford. Just past corner entry, Smithley’s car didn’t turn and ran straight up the track, clipping Gase in the left-rear and sending both cars hard into the outside wall. Bilicki’s spotter shouted for his driver to go low, and the #7 cleared the wreck by mere inches.

Smithley’s car briefly caught fire behind the flat right-front tire as he slid down to the apron of Turn 4, then stopped short of the entrance of pit road. The right side of the car was flattened, and the driver soon climbed out, ending his day. A tow truck was dispatched to tow him to the garage.

Gase, who briefly took over last place despite pulling ahead of Smithley to reach his pit stall, was beside himself. “Who was in the 53 tonight?” he asked as the crew taped up the decklid. “I mean, come on, what is the 53 doing?” The spotter said Smithley’s car appeared to hit the splitter on the track before he drove into Gase’s left-rear. Initial speculation was that an oil line came loose, but this was later changed to a loose valve cover, which triggered the fire. Gase pulled back onto the track on Lap 6, dropping Smithley to last. Gase also asked if Smithley was driving the same car from Sunday, and if the team changed engines. The crew confirmed it was Smithley’s car from Sunday, but did not know if there as an engine change.

On Lap 12, Gase tried to keep up with the rest of the field on the restart, but with his quarter-panel catching air like a parachute, his car was loose center-off. Seconds later, NASCAR said Gase had failed to meet minimum speed, and was out of the race under the Damaged Vehicle Policy. Gase pulled into the garage on Lap 14, his day done after just eight completed laps. NASCAR Officials in the garage radioed the tower to confirm Smithley and Gase were out on Lap 20, but the message wasn’t relayed until Lap 23. The official listed both drivers out due to “accident,” even though Gase’s retirement was due to the DVP.

Brennan Poole took 38th after his #15 Spartan Go Chevrolet was damaged in a Lap 74 wreck where he slid into Quin Houff’s #00 Good Greek Movers Chevrolet, putting both cars into the Turn 2 wall. Both drivers continued on in the race, but Poole later pulled into the garage around Lap 95. On Lap 99, someone on the #15 team said “We’re done, boys, load it up.” They then gave one set of tires to Spire Motorsports’ #77, whose driver J.J. Yeley finished 34th.

The night’s biggest heartbreak belonged to Bubba Wallace, who was in and out of the Top 10 for much of the race’s second and final stages. Wallace was running 11th with 43 laps to go when he broke loose in Turn 2 and slapped the outside wall. The driver said the brake pedal was to the floor, and believed it was another of the hub issues that have plagued the team. He returned for another pit stop before he pulled out of the race after 165 laps. Bilicki rounded out the Bottom Five in 36th, coming home under power, eight laps down.

LASTCAR STATISTICS
*The last time the #53 finished last in a Cup Series points race at Charlotte was October 7, 1984, when Donny Paul’s #53 Paul Brothers Chevrolet lost the engine after 1 lap of the Miller High Life 500. This was Paul’s first of just three series starts from 1984 through 1987.
*Smithley’s incident marks just the fifth time the last-place finisher of a Cup race at Charlotte failed to complete the opening lap. The first was the inaugural World 600 on June 19, 1960, when Lennie Page was the lowest-classified of six drivers disqualified for cutting the entrance to pit road. The remaining three also happened in the 600-miler: May 27, 1979, when Ron Hutcherson had rear end trouble on his #57 McClure Motors Ford; May 26, 1996, when Chad Little’s oil pump failed on the #97 Sterling Cowboy Pontiac; and May 28, 2006, when Dale Jarrett’s #88 UPS Ford was wrecked on the backstretch. 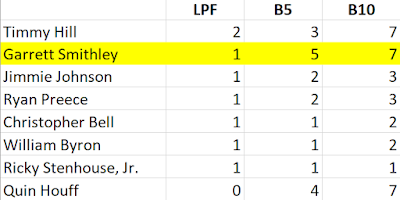