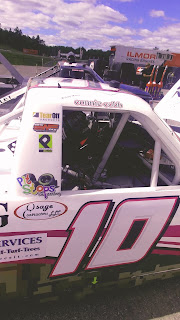 Another tight battle further back in the pack in last year’s running of the Chevrolet Silverado 250 at Mosport involved both Jennifer Jo Cobb and Norm Benning, both owner-drivers in the NASCAR Gander Outdoors & RV Truck Series. In the end, Cobb held off Benning for 23rd, both of them four laps down to race winner Brett Moffitt.

“For me, it went by really fast,” said Cobb after the race. “I didn’t get as much practice as I would’ve liked, or much preparation to get the truck ready. The front was really tight, so it just turned like a dump truck, but the rear end didn’t have any grip. So you just try and adjust for those two kind of opposite feelings. And we did the best we could with it. Came home with a fairly clean truck in 23rd. We have a lot of issues when we come to Canada with the road course transmission, clutch, and everything. Everything worked, and I’m really proud of my team for putting it together.”

Cobb also talked about the challenges faced by an underfunded team, and how one accident by either of her trucks makes a big difference. The race was held just two weeks after Michigan, where Daniel Sasnett crashed her #0 truck in qualifying. “It was tough for us because of the (qualifying) wreck in Michigan with the 0, and so we were down a truck, and we had to prepare a whole new truck to be the 0, which was nowhere near being ready. And then to race our one standing truck we have left, that 10 truck. That truck is awesome – it’s done Michigan, Pocono, Bristol, now a road course. This same truck. The team has really stepped up and doing a great job.”

As of the Mosport race, Cobb had just four race-ready trucks available. In addition to the two she brought to the track for herself and Ray Ciccarelli, all that remained were one truck reserved for the series’ two superspeedway races and one still-battered truck for Eldora. “The Eldora truck is okay, but it’s so beat-up from Eldora that it needs body work, which is really expensive. So we’ll save it for Eldora next year and try to pound out the body. So, yeah, it’s a grind. All the different types of tracks really put on a grind for us. Especially when you put them all in the same month. We had every different kind of race course in one month.”

Cobb also talked about several small businesses joining her team as sponsors, also increasing the exposure of her own veterans’ initiative Driven2Honor.org. “Yeah – Osage Contractors, they’re a good one. You know, it is. We’ve got individuals who help us out that are amazing and we’ve got small businesses that help us out. And that’s just how we make it. The small dollars at a time, and they add up, and I really enjoy working with those types of business owners, because they’re like me. They’ve got a small business. They’re trying to do a good job. They’re trying to grow, they’re helping us grow. So I really enjoy working with those small to medium sized businesses. Our per-race sponsorship starts at $1,000 and so it makes it affordable. So, if anybody’s interested, shoot me an e-mail. My e-mail’s on the contact page of our website.”

As of this writing, Jennifer Jo Cobb is still seeking her first Truck Series start of the 2020 season following back-to-back DNQs for her #10 at Daytona and Las Vegas.
Posted by Brock Beard at 12:01 AM