Ryan Huff finished last for the first time in his ARCA Menards Series career in Friday night’s General Tire 150 at Phoenix Raceway when his #10 Land and Coates Outdoor Power Equipment / Fast Track Racing Toyota crashed after 5 of the race’s 150 laps. The finish came in his second series start.

Huff races at Langley Speedway, running in the Pro Truck division. The 18-year-old tested at Daytona in January of this year with Fast Track Racing and later ran the Lucas Oil 200 with the team, showing speed before mechanical issues knocked him out of the race.  The Virginia native then announced this week that he would return to Andy Hillenburg’s flagship #10 car, again with the backing of Land and Coates Power Equipment.

Huff was joined on the entry list by 23 other cars, a number boosted by the race being a part of the ARCA Menards Series Showdown, a continuation of last season’s Short Track Challenge. The program, which has a separate points tally from the main series, is meant to showcase ARCA’s younger demographic of racers by running on tracks where drivers under 18 are allowed to race. Also, with ARCA National, East and West cars all compatible with each other for 2020, the Showdown gained even more hype from the general community as a de facto “all-star” short track scene.

The only East team to make the trip out was Rev Racing, which brought Nick Sanchez in the #6 and Chase Cabre in the #4E. Adapted from short track racing, double numbers made their debut on Friday. They made their presence known very early on, when West entry Zane Smith (#17E) was battling with Tanner Gray in the #17. Other than Smith, the West Series had a sizable contingent at Phoenix – Takuma Koga and P-1 Performance Motorsports ran, as well as four Bill McAnally Racing cars, for Gio Sclezi, Lawless Alan, Jesse Love Jr. and Gracie Trotter. ARCA regular Brad Smith was originally on the entry list but was forced to withdraw after a post-Daytona engine swap from Ilmor to Legacy ran long. Expect Smith's #48 to return at Salem.

In the only practice, Berte anchored the charts with a best lap of 29.6 seconds, 2.5 seconds off Ty Gibbs’ fast lap of the session. In qualifying, both the top and the bottom drivers remained the same, and with relatively the same gap in between them, although both ran about a half a second slower in qualifying than in practice.

In the early goings, Huff was in 21st place, ahead of Armani Williams, Tim Richmond and Tom Berte. On lap five, the broadcast cut to a shot of Huff trailing around the track with a stripe on the right side of his car. With sparks flying out of the right side, Huff entered the pits, and with no caution drawn, FS1 moved on from the situation.

After some early contact with the wall, Richmond parked eleven laps into the race due to handling issues. Trotter exited with engine issues, and just past halfway, DiSavino finished after contact with Drew Dollar sent him into the outside wall. Former race leader Sam Mayer rounded out the Bottom Five after radiator issues sidelined his GMS Racing Spencer Clark tribute car. 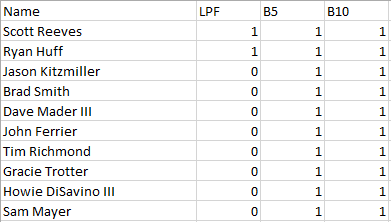