Joe Graf, Jr. picked up the 1st last-place finish of his NASCAR XFINITY Series career in Saturday’s NASCAR Racing Experience 300 at the Daytona International Speedway when his #08 CORE Development Group Chevrolet was collected in a multi-car accident after 37 of 120 laps.

Graf enters just his second season in the XFINITY Series after a part-time campaign last year. Prior to that, he’d competed full-time in the ARCA Menards Series for Chad Bryant Racing. He scored his lone victory on the short track at Berlin, where he tangled with leader Chandler Smith and held off Zane Smith. Graf finished eighth in the standings that year, then fifth the following year with new sponsor Eat Sleep Race, a motorsports apparel company geared toward kids.

While Graf has never competed in the Truck Series, Eat Sleep Race backed Graf for five races in the XFINITY Series instead. He bounced back from a DNQ at Michigan to make his series debut at Iowa with a 19th-place finish. He drove for Richard Childress in the team’s part-time #21 Chevrolet, running 23rd in the night race at Daytona after a late crash, then 14th in the fall race at Richmond. He also attempted the night race at Bristol for Kaulig Racing, but again failed to qualify.

Graf then landed a ride with SS-Green Light Racing, whose #08 team enjoyed a breakout season last year with Gray Gaulding. Gaulding nearly scored the victory at Talladega and had an outside shot at a spot in the Playoffs until the very last round of the regular season, but reportedly chose to part ways with the team at the end of the year. Even the glass trailer containing Gaulding’s show car ended up redecorated for Josh Bilicki at Rick Ware Racing. Graf’s sponsorship from Eat Sleep Race continued, though late in the offseason new primary backing came from New Jersey solar panel firm CORE Development Group.

Missing the race were Colin Garrett in the second-ever race for Sam Hunt Racing, driving the #26 The Rosie Network Toyota, Tommy Joe Martins in the return of his own team Martins Motorsports with AAN Adjusters as sponsor of his #44 Chevrolet, and most surprising, two cars from Kaulig Racing: part-timer A.J. Allmendinger in the #16 Ellsworth Advisors Chevrolet and full-timer Ross Chastain in the #10 Nutrien Ag Chevrolet. Brake issues were to blame at least for Chastain’s DNQ, which then saw his car catch fire in the garage afterward. A deal was then worked out with RSS Racing, whose part-time driver Jeff Green qualified 23rd in the #38 Chevrolet fully-sponsored by C2 Freight Resources. While Green has run strong in his limited plate race appearances, he stepped aside as the Kaulig team re-decaled his #38 and the in-car camera equipment was installed.

The change sent Chastain and the #38 team to the back of the field, where Joe Nemechek had used his Past Champions Provisional to earn the 36th and final starting spot. Nemechek returned to driving Mike Harmon’s second car, re-numbered #47, with sponsorship from the Patriots PAC of America to promote the re-election of President Donald Trump. Unapproved adjustments sent Nemechek to the rear before the start along with J.J. Yeley, the new driver of Jimmy Means Racing’s #52 Circle Track Warehouse Auction Chevrolet. Scoring also indicated that C.J. McLaughlin had fallen to the rear after qualifying 21st in the #93 Sci Aps Chevrolet along with Mike Harmon, 36th in his #74 Veterans 4 Child Rescue Chevrolet.

On the break, Harmon slipped back into the 36th spot, 4.439 seconds back of the lead. But coming off Turn 4 for the first time to complete Lap 1, 15th-place runner Caesar Bacarella blew a right-rear tire on his #90 Alpha Prime Chevrolet, sending him spinning toward the inside wall. Bacarella avoided a crash, but shed at least one crush panel before he backed into his pit stall. Since he didn’t draw a caution, this cost Bacarella two laps by the time he returned to action, and he nearly lost a third by Lap 9.

On Lap 19, Jeremy Clements was now running in 15th when he noticed his hood begin to come loose down the backstretch. Moments later, the hood of his #51 RepairableVehicles.com Chevrolet flapped up and smashed itself over the windshield and roof, breaking the hood into pieces. The impact also knocked loose the roof hatch, which now dangled from its tethers. The caution flew to retrieve the resulting debris, and Clements pulled behind the wall for repairs. While he did go to the garage for damage, this did not apparently trigger the “Crash Clock” as going to the garage did not result in an immediate DNF. While that same rule prevented the crew from replacing the hood, they were able to repair the hatch, and Clements returned to action on Lap 23, three laps down. Air buffeting through the open engine compartment made the car a handful, and the driver would later pit just short of the end of Stage 1 for bear-bond to keep the exposed radiator in place.

Clements was still in last place, three laps down, when another wreck ended the last-place battle. On Lap 38, just after the start of Stage 2, defending race winner Michael Annett spun his #1 AHA / Pilot / Flying J Chevrolet from the 10th position in Turns 1 and 2. As Annett spun up the track, Graf was looking for a way around Austin Hill’s #61 AISIN Group Toyota on the inside line. Hill came down and hooked Graf, spinning the #08 head-on into the outside wall and slamming Hill into Annett’s spinning car. While Annett kept going, both Hill and Graf were eliminated. Graf was running 0.233 second behind Hill at the end of the previous lap – a 1.255 to Hill’s 1.022. This ranked Graf behind Hill and secured him the last-place finish on Lap 42. Hill took 35th.

Completing the Bottom Five was another pileup on the final lap of Stage 2, when Riley Herbst’s #18 Monster Energy Toyota crossed the nose of Josh Williams’ #92 Sleep Well / Harkin Construction Chevrolet on the apron of Turn 3. Herbst slid up the track, collecting polesitter Myatt Snider in the #21 Tax Slayer Chevrolet, then a hard impact from Chris Cockrum in the #25 Advanced Communications Group Chevrolet. Cockrum took the 34th spot with Snider 33rd and Herbst in 32nd.

Two days after locking himself into his first Daytona 500 field, Timmy Hill secured a third-place finish, besting his previous career-best XFINITY finish of 7th he scored three other times, including two XFINITY races at Daytona in 2012 and 2018. The finish came despite last-minute issues in inspection where NASCAR discovered Bondo in the front valence. According to the team, they didn’t know the Bondo was there as it was added by a body shop after the sponsor requested the nose be painted. Repairs left the nose of Hill’s Toyota half-unpainted, but apparently without seriously affecting the aerodynamics.

Brandon Brown also ran strong by running near the front all day and matching his career-best 6th-place finish at Daytona last July. Brown’s #68 Larry’s Lemonade Chevrolet narrowly averted disaster on the final lap when he bumped into Michael Annett’s damaged car, sending Annett into a spin that caused the final wreck which forced the race to end under caution.

LASTCAR STATISTICS
*This marked the first last-finish for the #08 in an XFINITY Series race since September 15, 2012, when Tim Andrews’ run in the Dollar General 300 at Chicagoland ended after 9 laps with ignition problems on his Randy Hill Racing Ford. 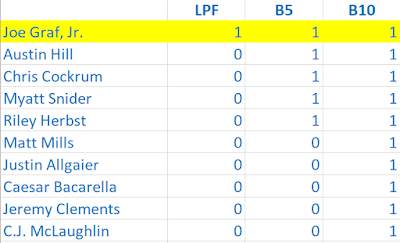