XFINITY: Battered Daniel Hemric manages to squeak past Landon Cassill before the rain in Vegas

Landon Cassill picked up the 2nd last-place finish of his NASCAR XFINITY Series career in Saturday (and Sunday’s) Boyd Gaming 300 at the Las Vegas Motor Speedway when his #89 Visone RV Chevrolet fell out with a vibration after 31 of 200 laps.

Las Vegas marked the 2020 season debut of both Cassill and Morgan Shepherd’s single-car operation. It was also their first start since a breakout performance under the lights at Homestead last fall, where the team made a rare full-race attempt. Thank to support from longtime team backers Dale and Sandra Dietrich, who paid the team’s tire bill, Cassill finished 15th, and even edged race winner Tyler Reddick to the finish line to stay just one lap down.

At the time of the Homestead race, Cassill had planned on helping Shepherd continue to build his program in 2020 while also competing full-time for StarCom Racing in the Cup Series. That changed over the offseason, when Cassill was replaced by Quin Houff in StarCom’s #00, leaving him without a Cup ride. The Shepherd team didn’t attempt the Daytona opener, but planned to run the rest of the season – a year where a further field reduction to just 36 grid spots threatened to make things even more difficult for small teams like his.

Fortunately, exactly 36 drivers were entered in Saturday’s race, and when qualifying was rained out, his #89 secured the final starting spot. The car also carried several new associate sponsors which joined since the end of last season – David’s Electric, Carolina Fire Protection, Inc., and Rollin’ Smoke Barbecue, plus a decal promoting Friday’s Strat 200 Truck Series race. The new logos didn’t get much airtime in practice as Cassill was one of three drivers who didn’t turn a lap in the lone session, but he would start the race.

With rain fast approaching the race track Saturday afternoon, Cassill was joined at the back by two cars sent to the rear of the field – polesitter Myatt Snider, sent to a backup after a spin in practice tore the splitter off his #21 Tax Slayer Chevrolet, and Robby Lyons in the #15 Sunwest Construction Chevrolet. The broadcast also showed other small teams falling to the rear, including the #74 Finlay Cadillac Chevrolet driven this week by Kyle Weatherman and the #66 MBM Motorsports Toyota Camry of Stephen Leicht.

Leicht, making his own season debut, was last across the stripe, 5.6 seconds back of the lead. He was also the first driver to be lapped when the leaders whistled past on the high side on Lap 11. Leicht was still running last on Lap 20 when trouble broke out up front. Daniel Hemric, still another driver returning to the circuit for the first time in 2020, had worked his way up to 4th in JR Motorsports’ #8 South Point Hotel & Casino Chevrolet. That time by, he was holding off Austin Cindric when the #8 broke loose in Turn 4. The car wobbled down the track, then slid up and slammed the outside wall with the right side. This crash became NASCAR’s competition caution, which had originally been set for Lap 20.

On Lap 23, Hemric returned to the track just as the field took the green flag but was now laps down and behind Leicht for last place. He pitted again on Lap 25, apparently clear of the Crash Clock, and now five laps down. Cassill, meanwhile, was running on the lead lap in 33rd, but then pulled down pit road with 12 laps to go in Stage 1. The car then pulled behind the wall, done for the afternoon. By the time the rain hit after the end of Stage 1, then stopped the race on Lap 50, Hemric had climbed past Cassill into 35th – Cassill 16 laps down to Hemric’s 13. Neither driver would return for the race’s completion on Sunday evening, and they would take the final two positions.

The rest of the Bottom Five was filled out after the Cup Series race. The lapped Stephen Leicht continued on in the early laps, pulling to the apron for the Lap 55 restart, then exited past the halfway mark. Finishing 33rd was B.J. McLeod, who lost several laps of his own in the #0 JD Motorsports Chevrolet, then fell out with ignition issues. Rounding out the group was Tommy Joe Martins, who bounced back from a DNQ in Daytona to qualify his own XFINITY car for the first time in 2020. Martins was headed for a mid-pack finish when he was forced to make an extended stay in the garage area. The engine then let go near the end, triggering a small fire behind the right-front tire.

Although the field was set by points, an offseason Owner Point swap following the closure of Stewart-Haas Racing’s second team meant J.J. Yeley lined up 5th in the #52 Franklin Signs Chevrolet owned by Jimmy Means. He even moved up to 3rd for the initial start after Snider’s penalty dropped the polesitter to the back. It was the best-ever start by a Jimmy Means-owned car in 900 combined NASCAR national touring series starts. Means’ Cup car had a best of 12th at the Nashville Fairgrounds in 1978, then again at Atlanta in 1994. The XFINITY team had never started better than 17th, which came at Daytona in July 2009. 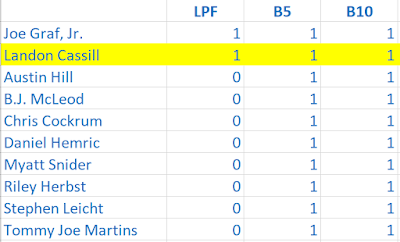