Ty Majeski picked up the 1st last-place finish of his NASCAR Gander RV & Outdoors Truck Series career in Friday’s NextEra Energy Resources 250 at the Daytona International Speedway when his #45 Plan B Sales Chevrolet was involved in a spectacular multi-truck accident after 15 of 106 laps.

Majeski has showed much promise in his rise through the ranks, but has been victim of the sport’s unpredictability. In 2017, he made his national series debut as a development driver with Roush-Fenway Racing, running part-time in the team’s prolific #60 Ford in the XFINITY Series. He made 15 starts over two seasons with a best finish of 7th in Iowa, but was left without a ride after Roush-Fenway ended their XFINITY program at the end of 2018.

Last year, Majeski moved to the ARCA Menards Series to run a six-race slate of speedway races with Chad Bryant Racing. The driver found sure footing once again, finishing no worse than fourth in all his starts and taking three victories – one each at Charlotte, Pocono, and Chicagoland. After the season wrapped up in the fall, Majeski was then invited to make his Truck Series debut at Phoenix, driving for Al Niece in the #44. Again, he excelled, qualifying a strong 5th and finishing 11th. The performance landed him his current full-time effort with Niece, taking the place of Ross Chastain in the #45 that finished second in last year’s championship.

Majeski was one of 41 drivers entered to attempt the 32-truck field, but the list shrank by two entries for qualifying day. First to withdraw was Tim Viens, whose #03 Trump Pence 2020 / Patriots PAC of America Chevrolet was reportedly damaged when the Affarano Motorsports team’s hauler drove into a ditch. The other withdrawal was Josh Reaume, whose #34 Motorsports Safety Group Chevrolet made it onto the track for the second practice session, only to lose the engine.

The seven drivers who failed to qualify were headlined by NEMCO Motorsports, whose two Fords both missed the cut with Joe Nemechek in the #87 and son John Hunter Nemechek in the #8. The remainder of the group were single-truck entries for other owner-drivers: Norm Benning in his #6 H&H Transport Chevrolet, Jennifer Jo Cobb in her #10 Driven2Honor.org Chevrolet, Ray Ciccarelli in his #49 CMI Motorsports Chevrolet, Clay Greenfield’s #68 Racklet Roofing Toyota (with a returning Jeff Hammond as crew chief) and Todd Peck in his family’s #96 Holla Vodka Chevrolet.

Qualifying 32nd and last was Angela Ruch, who over the offseason made the move from Niece Motorsports to Reaume Brothers Racing. Her #00 The Ruch Life Chevrolet was joined at the rear by two trucks penalized for unapproved adjustments: Ruch’s teammate Jason White in the #33 YourGMCTruckStore.com Chevrolet, and second-year driver Natalie Decker, one of Majeski’s teammates, in the #44 N29 Technologies Chevrolet. Both fell to the rear before the start along with Jordan Anderson, who surrendered the 23rd starting spot in his #3 K-Seal / Bommarito.com Chevrolet. While Ruch would be eliminated in an accident, Anderson, Decker, and White all bounced back in a big way.

On the break, Decker slipped behind Ruch and Anderson, but remained within a tenth of a second of both trucks. By the end of Lap 2, the last nine trucks in the running order had formed a small pack of their own, led by 24th-place Korbin Forrister in the #7 50 Egg Music Toyota. The lead 23 trucks continued to battle among themselves, though soon after, 23rd-place Bryan Dauzat in FDNY Racing’s #28 FDNY / American Genomics Chevrolet started to lose touch with them and ran by himself in the widening gap between the two packs. By then, Jason White had taken last from Decker.

The next challenger came on Lap 10, when Derek Kraus made an unscheduled stop for a loose window net on his #19 Shockwave Marine Suspension Seating Toyota. He lost a lap in the process, and Cory Roper slipped from the lead pack to 31st place in his #04 Alliance Aviation Ford, lifting Forrister to the 22nd spot. Forrister’s pack finally caught Dauzat, who dropped to 31st place, bringing up the rear of the pack, on Lap 15. The lapped Kraus, however, remained in last place until trouble broke out in Turn 1.

As the field crossed the stripe to begin Lap 16, Majeski was running in the 9th spot, 0.792 of a second behind the leader and leading an inside line of trucks. To his outside were a two-truck tandem of Todd Gilliland and Tate Fogleman with another long outside line to the high side, led by Austin Wayne Self. Exiting the tri-oval, Gilliland’s #38 Black’s Tire & Wheel Ford got Fogleman’s #02 Solid Rock Carriers Chevrolet loose. Fogleman slid up into Self and clipped him, sending Self careening across the track and into Majeski’s door. The impact yanked Majeski’s truck to the right, sending him airborne and sliding down the banking on his roof. Majeski was uninjured and the red flag was drawn to allow him to be safely removed.

It was not until after the yellow flag was displayed on Lap 17 that scoring reset, showing both Majeski and Self out of the race. Self, instructed by NASCAR to not drive his battered truck around the track, was classified just ahead of Majeski at the completion of the previous lap. The gap between the two trucks was just six-thousandths of a second – Self’s 0.786 to Majeski’s 0.792. This proved decisive in deciding which driver was classified last – the spot went to Majeski with Self in 31st.

The rest of the Bottom Five was promptly filled by another multi-truck pileup on Lap 66, which began when Angela Ruch lost control in Turn 3. Joining her in the Bottom Five were Fogleman and Dauzat, who collided on the apron with Fogleman’s battered Chevrolet catching fire. None of the drivers were injured.

After several close calls, one more pileup in the lead pack set up a dramatic finish where several drivers earned career-best runs. Among these were several drivers who contended for last place in the early laps. Jason White, who held the spot before Kraus’ window net issue, recovered to finish 10th, his first top-ten finish in just his fourth series start. Natalie Decker made her way up to the fifth spot after Kraus nipped her for fourth off the final corner, her first career top-five finish and one year after finishing last in the same race.

Two more underdogs threatened to snatch away victory from winner Grant Enfinger. Coming the closest was fan favorite Jordan Anderson, who after his own turn near the rear of the field found himself in 2nd place coming out of Turn 1 after Ross Chastain broke loose in front of him. He charged at Enfinger and moved to the outside lane, where the two made contact all the way to the stripe. This opened the door for a closing Codie Rohrbaugh, who recovered from a Turn 4 spin that didn’t draw a caution and was now pulling up on the inside in his #9 GCM / CR7 Motorsports Chevrolet. One more bump shot Enfinger ahead of Anderson by one-hundredth of a second with Rohrbaugh just over a trucklength behind on the inside. Anderson and Rohrbaugh were elated with their own first Top Five finishes – Anderson’s previous career-best was a 9th while Rohrbaugh’s was a 10th.

LASTCAR STATISTICS
*This marked only the third last-place finish for the #45 in Truck Series history, joining Rich Bickle at Martinsville on April 17, 1999 and Tommy Regan at Iowa on July 11, 2014. 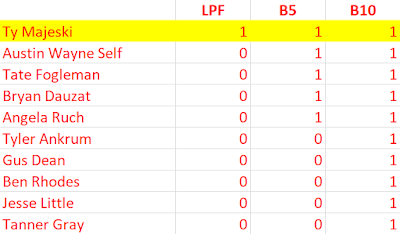