Scott Reeves finished last for the first time in his ARCA Menards Series career in Saturday’s Lucas Oil 200 Driven by General Tire at Daytona International Speedway when his #88 Reeves Racing Chevrolet fell out with drive train issues without completing any of the race’s 80 laps. The finish came in Reeves’ seventh series start.

Scott Reeves is a name well-known to those in the Florida short-track circles. A veteran Pro Truck racer, he has claimed World Series of Asphalt championships in the Pro Truck division in 2010, 2011 and 2013 - a borderline dynasty. Adding to his accomplishments is a FASCAR Pro Truck Series championship in 2007. He has also driven super late models around Florida since around the turn of the 21st century, venturing to various areas of the state like Orlando and Jupiter.

Reeves made the move to ARCA competition in 2015, partnering with Brian Finney, who had been competing as an owner/driver since 2012. Between 2015 and 2018, Reeves drove in six races for Finney. That stretch was highlighted by a four-race 2017 which included two eleventh-place finishes and three laps led at Fairgrounds Speedway in Nashville. With legacy motors being phased out, however, he sold his steel-body car to Swedish road racers and acquired an Ilmor motor in mid-2019, and had his Daytona car just about done by the new year:

Opening practice was led by Hailie Deegan, making a splash with DGR-Crosley after a semi-lackluster ARCA slate with Venturini Motorsports last year. Last of the 32 cars that took times was Wayne Peterson Racing’s Con Nicolopoulos, who ran a lap of 53.3 seconds, about four seconds slower than Deegan’s lap. Practice two was a little more toned down, as only 24 of the 33 cars entered took times; Charles Buchanan Jr. ran a lap of 53.9 to anchor the charts, about 4.5 seconds off of leader Connor Hall’s fast time. In group qualifying, a familiar face led the field in Michael Self. At the bottom of the field was also another familiar face from last year in Thad Moffitt, his #46 being the only car not to take a time in qualifying.

All 33 cars were able to take the green flag for Saturday’s race, with Self jumping out to an early lead. Andy Seuss, the outside polesitter, thought he saw a hole in front of David Gravel down the backstretch but spun off Gravel’s nose, sliding through the grass and back up on to turn three in the midpack. Everybody moved down to the lower lane and the apron, and Jason Kitzmiller was the first car to spin through the grass from his 15th-place starting spot. Further back in the field, Reeves was running the high lane when Seuss spun up the track, and diving down to the bottom the banking, clipped the nose of Eric Caudell’s #7 car, sending both cars skidding to a stop in the grass. Tow trucks surrounded both cars as FS1 cut to commercial, and the damage was terminal for Reeves, who went down as the first last-place finisher of 2020 Speedweeks.

Kitzmiller retired next with a blown engine, followed by Brad Smith, who retired after 17 laps due to an oil leak. The final two spots of the Bottom Five were filled by Dave Mader III and John Ferrier, both victims of “The Big One” when the pack squeezed a little too tight when passing the lapped car of Scott Melton on lap 39. In true Big One fashion, it also filled out the remainder of the Bottom Ten. 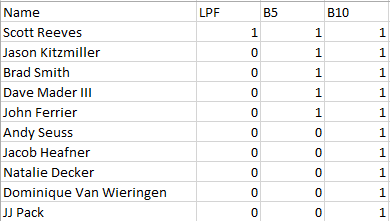