Ray Black, Jr. picked up the 2nd last-place finish of his NASCAR XFINITY Series career in Saturday’s Ford EcoBoost 300 at the Homestead-Miami Speedway when his #07 Isokern Fireplaces & Chimneys / Scuba Life Chevrolet fell out with engine failure after 4 of 200 laps.

Black’s most recent last-place finish came driving for Bobby Dotter’s team SS-Green Light Racing, with whom he been racing since 2016. Sponsorship issues scaled back his full-time effort to a part-time affair that year, and his best finish in 21 starts was his 12th-place showing under the lights at Daytona. When a deal to race multiple Cup races for Rick Ware Racing fell through, and with Spencer Boyd taking over for him at Dotter’s team, Black scaled back further in 2018. This time, he made just ten starts – nine for B.J. McLeod Motorsports, driving each of the team’s three cars, and a one-off for Mike Harmon in the inaugural Charlotte Roval race. His best finish came in Las Vegas, where he ran 17th for McLeod. He even ran a one-off for Ware and finished 16th, again in the July race at Daytona.

This year, with Spencer Boyd moving to the Truck Series, Black rejoined the SS-Green Light team to go full-time racing, again campaigning the #07 Chevrolet he ran two years prior. This time, he would have a teammate in Gray Gaulding, who had also moved down a tier from the Cup Series after the collapse of BK Racing. While both Black and Gaulding have racked-up a series of top-twenty finishes, Gaulding has generally finished better. Driving the number 08 that Dotter raced in his own driving career, Gaulding nearly won his first race at Talladega, finishing runner-up to Tyler Reddick, ran 8th in the Daytona night race, 6th at Bristol, and 7th at Las Vegas. The runs even gave Gaulding an outside chance of making the cut for the XFINITY Series Playoffs, which went down to the final regular season race.

Coming into Homestead, Black was still looking for his first top-ten finish of the year. His season-best had been 11th, both in the spring race in Las Vegas, and the second race at Iowa. But with steady sponsorship from Isokern Fireplaces & Chimneys, which backed some of his efforts at B.J. McLeod’s team, and returning funding from Scuba Life, Black enjoyed several Top 20 streaks. He finished no worse than 20th for seven races from Mid-Ohio to Richmond, then arrived in south Florida on another streak of four runs no worse than 17th. A Frontstretch report on November 9 indicated Black had re-signed with Dotter’s team for 2020, which was confirmed by Jayski just hours before Saturday’s green flag. The report also indicated Black had a new sponsor to join the team next season.

Saturday’s season finale marked the final time 38 drivers would take the green before the series’ second field reduction in six seasons will reduce the grid further to 36 cars in 2020. There were 39 drivers on the preliminary entry list, meaning one team would be sent home. Teams toward the back of the grid kept their Cup veterans behind the wheel with Mike Harmon putting Joe Nemechek in the #74 Chevrolet and Morgan Shepherd keeping on Landon Cassill. Both qualified for the race, sending home Bobby Dale Earnhardt, whose struggles at Phoenix were followed by his #66 Hyatt Life Sciences Toyota missing the cut by two-tenths of a second.

Nemechek took the 38th and final starting spot by virtue of his Past Champions Provisional as the 1992 series champion. It was a momentous weekend for the 55-year-old veteran, who one day earlier in the Truck Series race received an award for breaking Richard Petty’s career mark of 1,185 combined NASCAR starts. Joe’s son John Hunter presented him with a special helmet commemorating key moments in Joe’s career before competing against him in both Saturday and Sunday’s races. Nemechek’s hood also carried hand-written names of small sponsors who jumped on at Phoenix – including this site – after the names were on the rear decklid for the team’s primary and backup cars last week. Nemechek would also incur a redundant tail-end penalty for unapproved adjustments. On top of all this, Nemechek’s radio traffic had somehow interfered with that of Playoff contender Cole Custer, causing some confusion during the race’s early laps.

When Saturday’s race started, at least two teams dropped to the rear voluntarily. Timmy Hill qualified 24th as part of a double-duty effort with Motorsports Business Management, but was told on Saturday that the tires for his #13 CrashClaimsR.us / Generx Generators Toyota would be saved for Sunday’s Cup race, meaning it would be a “start-and-park” on Saturday. Also dropping back was J.J. Yeley, two weeks after securing the 2019 LASTCAR XFINITY Series Championship. As the field crossed the stripe, Hill was behind Yeley, 3.803 seconds back of the lead to Yeley’s 3.642.

At the start, the outside line appeared to take off quicker than the inside as NASCAR.com’s leaderboard also showed 34th-place Tyler Matthews, 36th-place Jairo Avila, Jr., and 38th-place Joe Nemechek a split-second ahead of the three drivers next to them on the inside line. Regardless, it was a driver on the inside – 29th-place Chad Finchum in the #61 Amana Heating & Air / Smithbilt Homes Toyota – who was penalized for passing before the starting line. At the end of the first lap, last place fell to 33rd-place qualifier Robby Lyons, who was making his XFINITY Series debut as Nemechek’s teammate in the #17 Rick Ware Racing Chevrolet. Finchum then took last on Lap 3 after he served his pass-through penalty.

Coming down to complete Lap 4, just seconds after Finchum returned to the track, Ray Black, Jr.’s car erupted in smoke. Black cut out of the racing groove and pulled low heading into Turn 1, but lost control and spun into the grass, causing his car to hop to a stop as the splitter dug into the turf. Black was okay, but his car was done for the day with a spectacular engine failure. “He blew the shit outta his motor,” said Yeley’s crew. “I don't know what the heck that was. That was a major malfunction.” Black took last from the lapped Finchum on Lap 5, the yellow granting Finchum the Lucky Dog to put him back in contention.

On Lap 12, with the race back underway, Yeley pulled down pit road, looking to be done for the day. That changed on Lap 16, when Tyler Matthews slammed the Turn 2 wall with his #15 LineTec Services Chevrolet, destroying the right-front corner of his car for the second caution of the day. The impact was so hard a piece of the car remained stuck under the SAFER barrier after the restart, and a third caution had to be thrown to make crews pry it out from under the wall. The moment the accident happened, Yeley’s crew sent the #38 RSS Racing Chevrolet back onto the track to make sure he passed Matthews’ #15. With this done, the #38 returned to the garage a second time after 20 laps. It was not until Lap 41 that NASCAR officials reported Black was out with engine failure and Yeley out with suspension issues. Matthews took 37th, his first Bottom Five of 2019.

Finchum worked his way back into contention after his penalty, but the engine let go at the start of Stage 2, sending him coasting down the backstretch then into the garage, securing 35th. Finchum tweeted the car broke a valve spring and retainer, accounting for a loud noise that came from his car when the motor let go in Turn 4. Rounding out the Bottom Five was Timmy Hill, whose set of tires took him 57 laps, four more than Finchum, before he was out with brake issues as the listed cause.

LASTCAR STATISTICS
*This marked the first last-place finish for the #07 in an XFINITY Series race at Homestead. 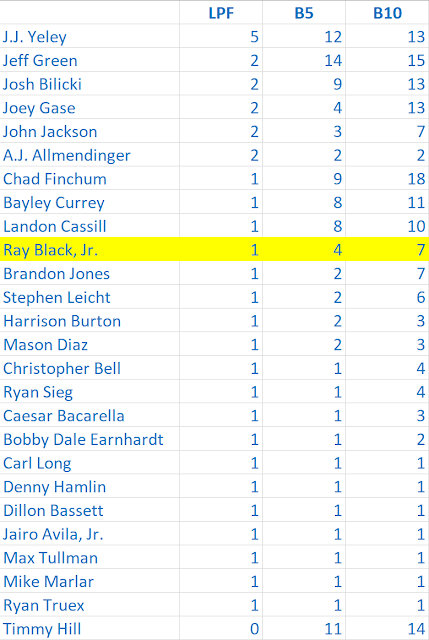