J.J. Yeley picked up the 11th last-place finish of his NASCAR XFINITY Series career in Saturday’s O’Reilly Auto Parts 300 at the Texas Motor Speedway when his #38 RSS Racing Chevrolet fell out with electrical issues after 3 of 200 laps.

The finish, which came in Yeley’s 327th series start, was his fifth of the season and the first since the Charlotte Roval, three races ago. In the XFINITY Series last-place rankings, it was the 20th for the #38, the 53rd from electrical trouble, and the 538th for Chevrolet. Across NASCAR’s top three series, it was the 53rd for the #38, the 126th from electrical problems, and the 1,695th for Chevrolet.

The last-place finish also secured Yeley the 2019 LASTCAR XFINITY Series Championship with two races still left to be run. It is Yeley’s first LASTCAR title in any of the top three national series.

Since his most recent last-place run in the series, Yeley has continued to run double-duty in both Cup and XFINITY competition, including Rick Ware Racing’s efforts in Cup. The day after his last-place run on the Roval, he ran 29th for Ware on Sunday, then 32nd at Dover, 30th at Kansas, and 28th last week in Martinsville, where a Top 25 slipped away due to late brake trouble. Since the Roval closed out a two-race deal with B.J. McLeod, his XFINITY schedule has returned to “start-and-park” duty for Rod Sieg’s team – he ran just 27 laps at Dover, then 13 at Kansas.

According to Twitter user @StartAndParkCar, Yeley was originally slated to welcome back sponsor Maximum Elevation Off-Road for the #38 this weekend. The original deal was for the sponsor to jump on board in the XFINITY races at Indianapolis, Texas, and Homestead. But when a new offer came for the sponsor to back Yeley in the Brickyard 400, this cut the Texas deal, leaving him without primary sponsorship. The car still carried at least two associate sponsors: Larry’s Hard Lemonade and Twiford Electrical Service.

Qualifying 38th and last on the grid was Justin Haley, who backed his #11 Leaf Filter Chevrolet into the outside wall on his first timed lap, leaving him without a time. Haley was sent to a backup car as result, as was a frustrated Ryan Sieg, who spun and wrecked hard during practice. Sieg’s #39 ECO Chief / Gas Monkey Garage Chevrolet broke loose coming off Turn 2, backed into the outside wall, then slammed hard into the inside fence. This sent Sieg scrambling to prepare his backup, which was intended to be his primary for next week at the ISM Raceway. Also sent to the rear was 6th-place qualifier and Playoff contender Justin Allgaier, who had to change engines on the #7 Suave Men Chevrolet.

By the time the green flag dropped, Yeley had dropped behind Haley, Sieg, and Allgaier, and was the 38th car across the stripe, 5.029 seconds back of the lead. The 37th spot had changed hands as well, as Timmy Hill in a new silver scheme on the #13 CrashClaimsR.us Toyota crossed it 4.144 seconds back of the leader. Yeley fell seven seconds back by the end of Lap 2, then was shown off the lead lap the next time by. NASCAR’s leaderboard showed him back on the lead lap after four circuits, but then two laps down after six. The result was the same – Yeley had pulled off the track after completing three laps. On Lap 14, NASCAR officials made the call by radio – “38 out, electrical.” With no post-race penalties, Yeley clinched the title.

Finishing 37th was Bobby Dale Earnhardt, who was routed by Ryan Sieg in Turn 2 and backed hard into the outside wall, destroying the rear clip of the #66 CIA / Hyatt Life Sciences Toyota. For some time after, the 36th spot was held by Jeremy Clements, who lost fuel pressure on the #51 RepairableVehicles.com Chevrolet. On Lap 56, the crew got it fixed and sent Clements back out there, allowing him to salvage a 28th-place finish. The 36th spot ended up going to Landon Cassill, who cited brake trouble for his early departure in Morgan Shepherd’s “throwback” #89 Visone RV Chevrolet, now with a new dark red splitter on the front bumper. Hill’s silver car ran 35th with Kyle Weatherman in the Rick Ware #17 SBC Construction Chevrolet rounding out the Bottom Five.

Josh Bilicki, Yeley’s title competitor, charged to a 21st-place finish, improving 15 spots from where he took the green flag. One spot ahead of him was Bayley Currey, who has continued a strong series of runs for Mike Harmon Racing’s #74. The #74 team has now finished 22nd or better in three of their last four starts – one each with Currey, Kyle Weatherman, and Joe Nemechek. Ryan Sieg also rebounded nicely in his backup car, not only preparing the Phoenix car for Texas, but taking 10th at the finish, his 12th top-ten run of the year.

But the man of the hour had to be Chad Finchum, who took a sterling 15th-place finish in Motorsports Business Management’s #61 Amana / Smithbilt Homes Toyota. As Finchum reported after the race, his team overcame a number of issues, including a flat tire and a loss of power steering in the early laps. The run was just one spot shy of Finchum’s career-best series finish of 14th in the July race at Daytona last year, and is his best-ever on a non-superspeedway, besting a 16th at Kansas in 2018. Finchum has quietly become consistent at Texas - he previously finished 17th in this race last year and ran 23rd this past spring. 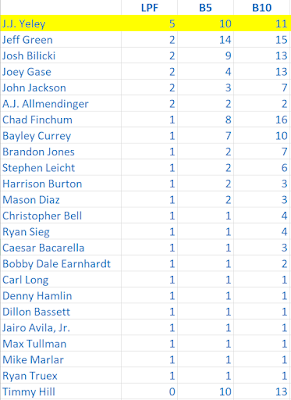