TRUCKS: Anthony Alfredo’s night ends before it has a chance to start

Anthony Alfredo picked up the 1st last-place finish of his NASCAR Gander Outdoors Truck Series career in Friday’s Ford EcoBoost 200 at the Homestead-Miami Speedway when his #15 Friends of Jaclyn Foundation Toyota fell out with engine trouble after he failed to complete any of the 134 laps.

The 20-year-old driver from Connecticut arrived in Homestead looking to close out his first partial season in Truck Series competition. He arrived following a pair of CARS Late Model Stock Tour victories at Hickory Speedway in 2017, a year he finished runner-up to Josh Berry for the title. Last year, he ran 7th in his first ARCA Menards Series start at Gateway and took a K&N Pro Series East victory at South Boston, ranking fifth in series points.

This short track success led to Alfredo’s current part-time campaign for David Gilliland’s DGR-Crosley team, where he’d drive three of the team’s trucks at least once in 2019. His debut came driving the #17 at Atlanta, where he ran 17th. His season-best finish of 8th came in just his fourth start at Charlotte, followed by a 9th in Chicagoland. But an opening-lap tangle with Stewart Friesen at Pocono and a late-race pileup at Michigan left him with his second and third DNFs of the season, all due to crashes.

Alfredo debuted a new look to his #15 at Homestead with the Friends of Jaclyn Foundation as sponsor, benefiting children battling pediatric cancer. The foundation had increased its presence in the series this year with a season total of seven races - four backing Timothy Peters at Niece Motorsports and NEMCO Motorsports, then as an associate backer for two of Alfredo’s starts at Texas and Charlotte.

Alfredo was one of 37 trucks entered for 32 spots, meaning five drivers would miss the show. That list dropped by one after Friday’s two practice sessions, which both saw Josh Reaume slowest overall. Reaume’s white #34 Toyota, which carried a “thank you” message to Reddit’s NASCAR group on the tailgate, withdrew prior to qualifying.

When everything had dried out, the 32nd and final starting spot went to Jesse Little, who bounced back from a narrow DNQ last week in Phoenix to run 12th in opening practice and second to title contender Stewart Friesen in Happy Hour. The effort came in a time of transition for Little, whose JJL Motorsports #97 team was acquired by Logan Puckett, re-branding the effort as Diversified Motorsports Enterprises. Little will drive part-time for the team next season in addition to his full-time XFINITY effort for Johnny Davis.

During the pace laps, Little and 31st-place Ray Ciccarelli in the #49 CMI Motorsports Chevrolet were instructed to swap lanes. Both then moved up a spot when Alfredo pulled down pit road, complaining of a bad vibration. The driver tweeted later that the motor wouldn’t crank on pit road, “and when I got ta push to start it was already fried.” The team then pushed the #15 to the garage area, leaving behind a puddle of oil. This negated a “pitting before the green” penalty that would have forced him to surrender his 24th-place starting spot and take the green from last place.

Alfredo was listed “off” the track until the end of Stage 2. The NASCAR official in the garage was about to report the exit with four to go in Stage 2, but was instructed to wait until the stage ended on Lap 60. “15 out, engine,” was the report – again not classified as a “did not start” despite him missing the green flag.

Finishing 31st was Ciccarelli, whose #49 started trailing smoke in Turn 4 on Lap 50, just as the leaders were putting him a second lap down. The driver pulled down pit road on the resulting caution, then was done for the night. Josh Bilicki finished 30th, the only other driver out of the race, citing electrical issues on the #33 Exotic Car Trader Chevrolet.

Taking 29th was Angela Ruch, whose #44 Give A Child A Voice Chevrolet struggled with speed from the start of the race. The truck carried special significance for Ruch, as the paint scheme was designed by her 19-year-old nephew Eric Erdman, who was diagnosed with advanced brain cancer three years ago. Ruch wound up seven laps down, one circuit behind Jennifer Jo Cobb’s #10 Waldo’s Painting Chevrolet in 28th. Cobb and Bilicki earned their first Bottom Fives of 2019.

LASTCAR STATISTICS
*This marked the first last-place finish for the #15 in the Truck Series since March 31, 2007, when Bill Lester’s #15 Red Top Auto Auction Chevrolet fell out with engine trouble after 37 laps of the Kroger 250 at Martinsville. The number had never before finished last in a Truck race at Homestead.
*Alfredo is the third driver to fail to complete a lap of a Truck Series race at Homestead. The other two were Terry Cook (April 8, 1998) and Ray Ciccarelli (November 17, 2017). 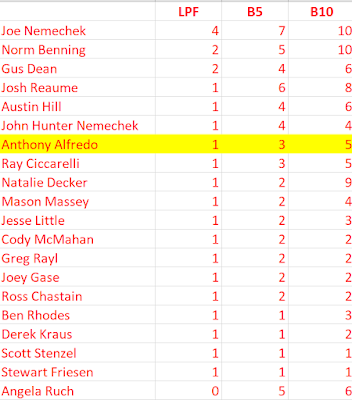