Kyle Larson picked up the 7th last-place finish of his Monster Energy NASCAR Cup Series career in Sunday’s Ford EcoBoost 400 at the Homestead-Miami Speedway when his #42 Credit One Bank Chevrolet fell out with engine trouble after 209 of 267 laps.

The finish leap-frogged Larson into a five-way tie for the 2019 LASTCAR Cup Series Championship, but in so doing secured the title for B.J. McLeod by a single bottom-five finish. Thus concluded one of the tightest LASTCAR battles in series history. McLeod finished 32nd.

Since we last featured Larson following a rough night in Richmond, the California native had turned things around in 2019. Two races later at Dover, he finished 3rd, then an 8th at Kansas and a 10th at Sonoma, where he won the pole for a third consecutive year. Back in Playoff contention, he waged a thrilling side-by-side battle with Alex Bowman at Chicagoland and finished 2nd, ran 4th at Kentucky, then finished 8th or better in seven of the next nine races. A runner-up finish to Erik Jones at Darlington vaulted him into the Playoffs, where he advanced to the second round with no finishes worse than 13th.

In his return to Dover, Larson would not be denied. He led 154 of the 400 laps, including the final 73 to the checkered flag for his sixth Cup victory, his first in 76 races, dating back to Richmond on September 9, 2017. The win vaulted Larson into the third and penultimate round of the Playoffs – further than he’d ever advanced before. And though he finished 9th at Martinsville, 12th in Texas, and 4th at the ISM Raceway, it was not quite enough to make his first-ever Championship 4.

Still, Larson was one to watch at the Homestead-Miami Speedway, where his penchant for running the highest possible groove has always made him a favorite to pull off the victory. With qualifying cancelled, Larson secured the 6th spot on the grid. NASCAR elected to allow for practice in place of time trials, where the blue #42 ran 8th fastest.

Starting 40th and last on the grid was Timmy Hill, who rejoined Motorsports Business Management’s Cup team. His spotter was Joey Gase, who shared the #66 Toyota ride with Hill all season, most recently last week at the ISM Raceway, where he finished 38th with a blown motor. Hill carried a new paint scheme with sponsorship from Generex Generators, the same company that backed his XFINITY ride for MBM on Saturday. That race saw Hill finish in 34th as the team elected to save their tire budget for Sunday’s Cup race.

When the race started, the outside lane drew away first, dropping 39th-place qualifier B.J. McLeod in the #53 AQRE.app Chevrolet to the 40th spot. Hill then started racing side-by-side with the #96 TRD 40th Anniversary Toyota driven by Drew Herring, the JGR test driver who was making his Cup Series debut. On the backstretch, McLeod slotted in behind Herring, then drew alongside Hill, who was held up in the outside groove by McLeod’s Rick Ware Racing teammate Josh Bilicki in the #52 Travis Mills Foundation Ford. This briefly put the bottom four drivers in two-by-two formation until Bilicki slowed in front of Hill, allowing McLeod by and dropping the #66 back to last place.

On Lap 5, Hill caught Bilicki and worked under him for position, and finally got by off Turn 2. At the time, Bilicki was complaining of “losing the front end” in Turn 3, though his #52 was still staying in touch with 39th-place Hill. On Lap 14, the leaders caught last-place Bilicki, and leader Kevin Harvick pulled low in Turn 4 to put his car the first one lap down. As the leaders funneled past, the interval between Bilicki and Hill more or less stabilized, and the Ware crew told their driver his #52 had good long-run speed. This was shown on Lap 23, when Bilicki caught and re-passed Hill for position.

Hill, meanwhile, was struggling with radio issues, much to the frustration of team owner Carl Long. “You’ve gotta get somebody down there to get off the button,” he said, wondering who was keeping their mic open. The team tried to figure out if it was an issue with Hill’s own mic button as they prepared for their first pit stop. That stop came on Lap 38, and by then was two laps down. Bilicki re-took the spot on Lap 44 after his own stop put him three down. By the 50th circuit, Bilicki was four down.

On Lap 63, Bilicki had made up five seconds on Hill and caught the #66 coming off Turn 2. The two ran door-to-door down the backstretch before Bilicki completed the pass off Turn 4. As Bilicki pulled away, the team congratulated him on the radio for making up the deficit. By the 77th circuit, the two were more than a straightaway apart.

The battle resumed at the start of Stage 2, when Hill got the drop on Bilicki and put the #52 back to last. Hill then slid in Turn 4 and dropped down to pit road, complaining of a loose wheel. He followed Ryan Newman, who was making an unscheduled stop of his own. Unfortunately, Hill’s crew was then docked for an uncontrolled tire penalty, forcing Hill to make a pass-through penalty. By then, he was seven laps down and well back of Bilicki for the spot. By Lap 111, Hill was nine laps down, three circuits behind the #52 of Bilicki.

Next to join the battle was Ross Chastain, who was in the garage area by Lap 126, when he was 11 laps down. He took over last from Hill as the crew addressed an oil leak, checking over the oil lines. The car re-fired on Lap 138, 23 circuits back, with no other cars in the garage area. Scoring then reset to show Chastain 22 laps down, 11 circuits back of Hill. Following the caution for John Hunter Nemechek’s spin, Chastain was running by himself on Lap 143. Nine circuits later, he caught both Hill and his own teammate Joe Nemechek in the #15 RoyalTeakCollection.com Chevrolet. Chastain split the middle between the pair and continued to log laps.

Bubba Wallace then saw his run go sideways when he made an unscheduled stop for a flat tire on the #43 Victory Junction Gang Camp Chevrolet. He was then on pit road for an extended stop on Lap 203, when he’d fallen to 11 laps down in 38th. The crew was now addressing brake issues, and telling their driver to pump the brakes to get the pedal back. He wasn’t rolling again until Lap 206, when he was in 39th, seven circuits ahead of last-place Chastain.

During all this, Kyle Larson was in position to be the highest-finishing non-Playoff driver in the race. He’d finished second to Martin Truex, Jr. in Stage 1, then third to Kyle Busch and Kevin Harvick in Stage 2, scoring him 17 total stage points. He was still running among the leaders when he came down pit road around Lap 210. The crew lifted the hood, addressing an issue with the engine. By Lap 219, he was still on pit road, nine laps down in 34th. That time by, William Byron also dropped off the pace in his #24 Axalta Flames of Independence Chevrolet, coasting onto pit road through the access road. “We had a good car,” said Larson’s crew. “We had something we could challenge them with.” Larson was done for the day, his crew pushing the car backwards to the garage entrance, where Byron was pulling in. There was a six-lap gap between the two Chevrolets, which meant Larson would remain behind Byron in the running order.

On Lap 225, Bubba Wallace was penalized for too many crewmen over the wall, forcing a pass-through penalty. By serving it on Lap 227, this dropped him behind Chastain and into last place. Two circuits later, both Byron and Larson were “unavailable” on RaceView (incidentally, the last race NASCAR will use the program before it shuts down in 2020). On Lap 230, NASCAR officials in the garage reported “24 and 42 both out, engine.” Four laps after that on Lap 234, Larson took last from Wallace with Byron following to 39th soon after.

Wallace ultimately climbed out of the Bottom Five to finish 34th, one spot ahead of Chastain. Chastain’s own finish was improved by the exit of his two teammates, both Nemechek in the Premium #15 and the technical partner Reed Sorenson in the #77 Rousseau / Quartz Cevrolet. Much like at Phoenix, Sorenson was out with a sudden brake issue, Nemechek with steering issues. The pair settled into 37th and 38th, respectively. Nemechek and Byron ended up with their first Bottom Fives of 2019. Rounding out the group was Bilicki, who likewise cited brake issues in the final laps and took 36th. 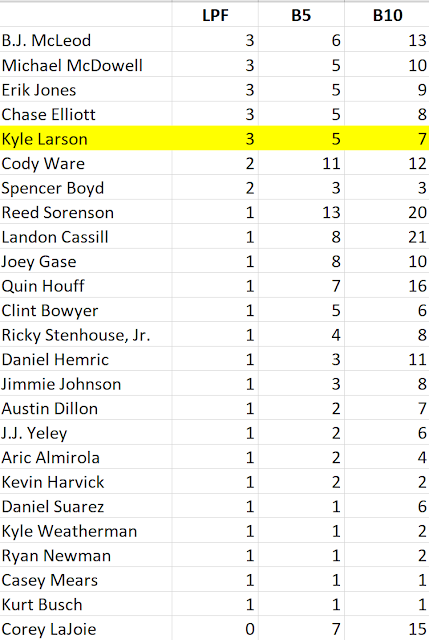