XFINITY: Ryan Truex the latest to finish last in all three of NASCAR’s national touring series

Ryan Truex picked up the 1st last-place finish of his NASCAR XFINITY Series career in Saturday’s Kansas Lottery 300 at the Kansas Speedway when his #8 Marquis Chevrolet fell out with a blown engine after 4 of 200 laps.

Following his release from Kaulig Racing at the end of 2018, the younger Truex has been piecing together a part-time schedule with a handful of teams. He attempted to make this year’s Daytona 500 in a one-off for Tommy Baldwin Racing, but his #71 Chevrolet was unable to race in through his 150-mile qualifier.

Since then, Truex’s focus has been sharing the fourth JR Motorsports entry with seven other drivers, including Dale Earnhardt, Jr., who ran at Darlington. The former #5 team was renumbered to #8 in a trade with B.J. McLeod Motorsports. While the team has yet to win in 2019, Truex finished runner-up in his season debut at Phoenix, following Kyle Busch. Prior to Saturday, his most recent run in the car came at the Roval, where he debuted new sponsorship from Marquis Hot Tubs and finished 10th. Marquis would sponsor Truex again at Kansas, his last start of the year in the #8.

The Marquis car was among the 39 entrants, a list that grew from 38 after Mike Harmon Racing’s #74 was confirmed to continue their full-season effort. He began the weekend 12th in opening practice, improved to 8th in Happy Hour, and qualified in the 8th spot with an average speed of 178.625mph (30.231 seconds), second only to 7th-place Justin Allgaier among the JR Motorsports quartet. The lone driver sent home was Timmy Hill in Motorsports Business Management’s #13 Toyota, six-tenths of a second off from a starting spot. Two of Hill’s three teammates – Chad Finchum and Bobby Dale Earnhardt – needed to rely on Owner Points. Earnhardt, making his first start of the year, damaged his #66 CIA / Hyatt Life Sciences Toyota in practice when he backed into the Turn 3 wall.

Starting 38th and last, however, was another JR Motorports driver. Defending last-place finisher Michael Annett continued to struggle at Kansas, breaking loose in qualifying and aborting his lap. According to LASTCAR reader DNF Racers, who was watching from the frontstretch, Jeremy Clements’ 6th-place qualifying car didn’t fire at the command, then started in time to join the field. Prior to the start, Annett fell to the rear along with J.J. Yeley, who qualified a strong 14th in the unsponsored #38 RSS Racing Chevrolet. Landon Cassill, who qualified Morgan Shepherd’s “throwback” #89 Visone RV Chevrolet, also dropped to the back from 26th on the grid and took over last on the break. He then re-passed Yeley by Lap 4, putting the #38 to last.

Then on Lap 5, Truex’s car started smoking off Turn 4 with fire spotted under the right-front wheel well. “We lost power steering first,” said the crew chief. “Bring it to the garage.” Truex coasted to the apron by Turn 1 and was advised to watch the fire. He rolled past the fire truck in Turn 2 and made it back to pit road. With a hard left-hand turn to the garage, he was done for the day.

A trail of stay-dri led the way back into the garage as the rest of the Bottom Five pulled in. Next to exit was Yeley, who cited electrical issues, followed by Landon Cassill who pulled out with a vibration. Bayley Currey was next in 35th, out with suspension issues on the #17 Rick Ware Racing Chevrolet. Rounding out the group was Harrison Burton, whose news of taking over Joe Gibbs Racing’s full-time #20 team in XFINITY next year was followed by a tangle with Austin Cindric that left him 34th. Damage to the left-rear sent Burton to the garage, done for the afternoon.

Last-place qualifier Annett rebounded nicely, finishing 4th, while Jeremy Clements defended his 6th-place spot. Ross Chastain finished 10th for Kaulig Racing, which used a Richard Childress Racing car after Chastain’s hauler was involved in an accident on I-40 that sent the trailer sliding down an embankment. Also earning a strong run was Dillon Bassett, who took the place of his brother in DGM Racing’s #92 Down Syndrome Awareness / Just As I Am Chevrolet. Bassett finished 16th, the best-ever finish for Mario Gosselin’s part-time #92 effort.

LASTCAR STATISTICS
*This marks the first last-place finish for the #8 in an XFINITY Series race at Kansas, and the first for the number in this series since September 26, 2015, when Blake Koch’s #8 Leaf Filter Toyota crashed after 2 laps at Kentucky.
*This is also the second-straight year that JR Motorsports has finished last in this race, following Michael Annett’s first-lap crash in 2018.
*Truex is the 35th different driver to score at least one last-place finish in each of NASCAR’s national touring series. The following is a complete list with the dates that each driver scored their first last-place finish in each series: 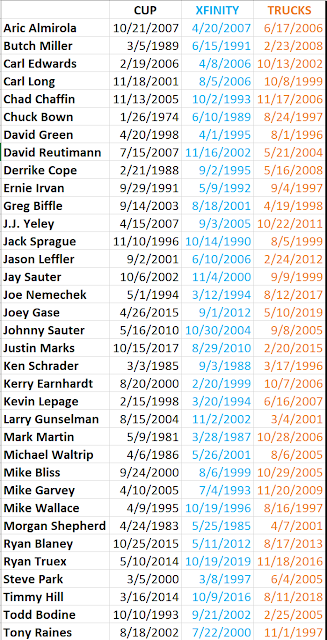 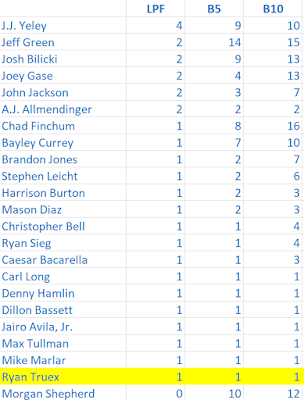