XFINITY: A day to forget for Joe Gibbs Racing as Harrison Burton tangles with teammate in Dover

Harrison Burton picked up the 1st last-place finish of his NASCAR XFINITY Series career in Saturday's Drive Sober 200 at the Dover International Speedway when his #18 Dex Imaging Toyota was eliminated in a multi-car pileup after 2 of 200 laps.

It was at this same Delaware track two years ago that the son of Cup Series veteran Jeff Burton celebrated his championship in the NASCAR K&N Pro Series East, scoring his fifth victory in fourteen races. He'd also scored his first ARCA Menards Series win that year at Toledo, and would follow that with another at Pocono the next season. He'd also been making a number of Truck Series starts dating back to 2016, when he was just 15 years old, and has driven for Kyle Busch Motorsports ever since. He finished 22nd in his series debut at Martinsville, and in the same race one year later earned his first Top Five with a 4th, just his seventh series start. This year marks Burton's first full-time campaign in the Truck Series, driving the #18 Safelite Auto Glass Toyota. However, a year that began with Burton's third ARCA win in the Daytona opener has been noted more for he and teammate Todd Gilliland both missing the Truck Series Playoffs, and team owner Kyle Busch making no secret of his impatience with the two young talents.

Still just 18 years old, Burton has seen his 2019 branch out into the XFINITY Series for the first time, beginning a part-time effort in Joe Gibbs Racing's #18 Toyota Supra. With longtime backer Dex Imaging as sponsor, Burton made his series debut at Bristol this past spring, finishing 10th, then ran a season-best 4th in his very next start at Iowa. Following a rough outing at Loudon, where he came out on the losing side of an on-track battle with Paul Menard, Burton would make three consecutive starts leading into Dover. He arrived in Dover after a 6th-place finish at Richmond, then a 13th on the Charlotte Roval.

Starting 38th and last on Saturday was one Mike Harmon, who returned to the seat of his unsponsored #74 Mike Harmon Racing Chevrolet. He started 38th thanks to the late entry of Jimmy Means Racing's second car, the blue #53 last seen at Mid-Ohio, avoiding the first short XFINITY field since Watkins Glen. Kyle Weatherman, who moved from the #17 team Harmon supervises to the Means #53, qualified 36th. Landon Cassill, who rejoined Shepherd Racing Ventures for their return to the series after skipping the Roval, qualified strong once more, putting the 1981 "throwback" version of the #89 Visone RV Chevrolet 12th on the grid. It was to be another short afternoon for Cassill, out with electrical issues after 55 laps, but due to the day's high attrition, he still managed a 29th-place finish.

Three drivers were sent to the rear of the field prior to the start: 16th-place qualifier Michael Annett for an engine change on his #1 TMC Transportation Chevrolet, and unapproved adjustments for both 19th-place B.J. McLeod in the #15 JD Motorsports Chevrolet and polesitter Chase Briscoe in the #98 Ford Performance Ford. By the end of the first lap, however, all three were ahead of several drivers who voluntarily fell to the rear prior to the start. Judging by the intervals on NASCAR's own leaderboard, the last car across the stripe belonged to 32nd-place qualifier Carl Long, who was back behind the wheel of one of his own cars for the first time since Loudon. Long's blue-and-white #13 Motorsports Business Management Toyota was 5.115 seconds back of the lead as the field took the green. Harmon's last-place qualifying car was just 3.282 seconds back of the lead, separated from Long by at least five other drivers - 22nd-place starter Bayley Currey in the #38 RSS Racing Chevrolet (3.835 seconds back of the lead), 24th-place Joe Nemechek, who took Kyle Weatherman's place in the #17 Rick Ware Racing Chevrolet (4.119 sec), 29th-place J.J. Yeley in the #93 RSS Racing Chevrolet (4.153 sec), 27th-place Timmy Hill in MBM's #66 OCR Gaz Bar Toyota (4.458 sec), and 36th-place Weatherman himself in the Means #53 (4.689 sec). Landon Cassill was also likely among this group as he was seen slowing in the high lane in front of the penalized Michael Annett.

When the green flag dropped, Burton was running among the leaders when the camera cut to his #18 suddenly spinning off Turn 2, clipping the passing Noah Gragson in the right-rear. A closing Brandon Jones, Burton's teammate in the #19 Menards / Atlas Toyota, tried to swerve right, but Jones' left-front hit Burton in the left-rear by. The hit sent Burton spinning into the inside wall, where he bounced off the inside barrier with the left-front corner. Both cars struggled around the track under yellow with Burton's car trailing smoke from the fender and Jones' hood dislodged, blocking the view through his windshield. Replays show the accident began in 2nd spot, where Tyler Reddick's #2 Freightliner Chevrolet broke loose at almost the same moment as Burton in 6th. While Reddick made minor contact with the outside wall, keeping his car straight, Burton and Jones were not so fortunate. After limping around the track for a lap, Burton followed Jones down pit road, both of them done for the day. This extra lap changed the last-place outcome as Burton had started ahead of Jones, and would have ordinarily put Jones in last. Reddick returned to action after repairs and recovered to finish 12th. Burton's crew reported the radiator was knocked out, and he pulled into the garage through the backstretch entrance on the restart on Lap 5.

After the accident, Christopher Bell found himself quite suddenly the only Joe Gibbs Racing car on the track. Unbelievably, he too soon faced trouble when his #20 Rheem Toyota clipped the Turn 4 wall and lost fuel pressure on Lap 16, spending at least seven laps on pit road with the hood up before he went to the garage. This came after problems on Lap 11 for Jeremy Clements, whose #51 RepairableVehicles.com Chevrolet was running well when something "went off" in the engine, forcing him to pit road. The crew looked under the hood, then pulled into the garage, done for the day in 36th. Kyle Weatherman pulled off the track in the Means #53, and on Lap 22 a lapped Harmon fell out when Playoff contender John Hunter Nemechek bumped him into a spin off Turn 4. Harmon managed to avoid serious damage when nosing into the inside wall, but was done for the day with a bent-up nose. Currey and Yeley parked their RSS cars soon after. On Lap 26, Bell's car re-fired in the garage, and he climbed from 34th to 25th, dropping Harmon to the final spot in the Bottom Five.

The first-lap wreck eliminated 37th-place Brandon Jones from Playoff contention. Among those who joined him was Ryan Sieg, who nonetheless finished 10th, his tenth top-ten finish in 29 races this season. Finishing right behind him in 11th was Brandon Brown, his #86 Jabs Construction Chevrolet second to JR Motorsports driver Zane Smith among non-Playoff drivers, his best finish since a 6th under the lights at Daytona in July. DGM Racing teammates Dillon Bassett (14th), Josh Williams (15th), and Johnny Davis driver B.J. McLeod (16th) also found their way into the Top 20. And Stefan Parsons continued to shine in his part-time effort for McLeod’s own team, running as high as 14th at the end of Stage 1 before settling back in 19th in the #99 Koolbox Toyota.

LASTCAR STATISTICS
*This marked the first XFINITY last-place finish for the #18 since Darlington on August 31, when Denny Hamlin's race-winning Bill Elliott throwback was disqualified from the VFW Sport Clips Help a Hero 200. The number had never before finished last in an XFINITY Series race at Dover. 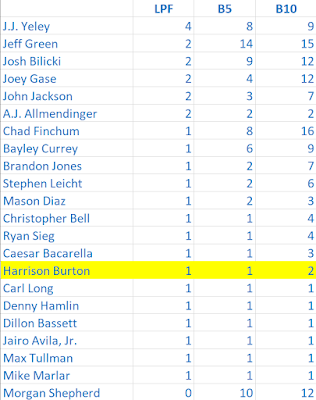