TRUCKS: Mason Massey’s fluid leak leads to a frustrating race for Cobb; Boyd breaks through with upset win at Talladega

Mason Massey picked up the 1st last-place finish of his NASCAR Gander Outdoors Truck Series career in Saturday’s Sugarlands Shine 250 at the Talladega Superspeedway when his #33 Anderson Power / Generac Chevrolet fell out with a blown engine after 8 of 98 laps.

Massey, a 22-year-old from Douglassville, Georgia has been racing for most of his life, competing on both dirt and asphalt. He drove Late Models for Bill Elliott, winning the Alabama 200 at Montgomery Motor Speedway in 2012. He’s also a former U.S. Legends Pro National Champion, and has branched out into Dirt Late Models. This past June, Massey made his Truck Series debut with Josh Reaume’s team, finishing 21st at Iowa. He’s since made at least one start in each of Reaume’s three trucks with a best finish of 17th at Pocono.

Saturday marked Massey’s first Talladega start, and in opening practice ran 30th of 31 trucks ahead of teammate Jesse Iwuji in the #34. He was again second-slowest in Happy Hour, but improved to 29th of the 32 drivers in qualifying with a lap of 172.771mph (55.426 seconds). Following Ray Ciccarelli’s withdrawal of his CMI Motorsports team, no drivers failed to qualify.

Iwuji’s #34 John’s 360 Coatings Toyota started 32nd and last on Saturday, and was joined by owner-driver Jordan Anderson, who missed the driver’s meeting after timing in 30th in the #3 WCIParts.com / Albiero Energy Chevrolet. What unfolded was a chaotic sequence of events at the back of the field.

On the break, Iwuji took over last place from Anderson, 3.068 seconds back of the lead. By the end of the first lap, Massey was back in 31st, just a fraction of a second ahead of his teammate. That same time by, Angela Ruch made an unscheduled stop when her #44 The Ruch Life Chevrolet kept jumping out of gear. The team brought out a bungee cord to hold the truck in gear, but lost two laps in the process.

On Lap 6, Codie Rohrbaugh broke loose in Turn 1, dropping him out of 19th. As he continued along the apron, NASCAR didn’t throw a caution. Moments later, Jennifer Jo Cobb in her #10 PitStops4Hope.org Chevrolet spun down the backstretch, but again the yellow didn’t come out. The driver was livid over the radio, saying that someone on track was leaking fluid, causing her to spin, and coating her windshield in a layer of film. This same fluid may have also caused Rohrbaugh’s incident, but this wasn’t confirmed. The caution did not fall until Lap 9, and only when Harrison Burton’s #18 Safelite Auto Glass Toyota spun out on the frontstretch while in the lead draft. By then, Cobb was off the lead lap and in last place.

Under caution on Lap 10, a frustrated Cobb made it to pit road. Despite avoiding damage to her truck, a sponsor falling through meant the team didn’t have another set of tires ready to replace the ones flat-spotted by the spin. The team sent a runner up pit road to see if they could get a set of scuffs from another team. “We don’t have any fucking tires to put on it, so I guess we'll just sit here,” said Cobb. “Take that windshield and you go take that to a NASCAR official, please. The most ridiculous shit I've ever heard of.”

It was then revealed that Massey’s #33 was the truck leaking fluid, and on Lap 11 the truck was seen pushed behind the wall with the white TV panel smeared with brown liquid, believed to be gear oil. Fluid had, in fact, been left from Turn 4 all the way past Turns 1 and 2, but it was not until Lap 12 that NASCAR threw a red flag to clean it up.

While the field was stopped, Cobb’s #10 remained on pit road as the crew continued to search for tires. They first looked to Stewart Friesen’s crew for a pair of scuffs, then to Ross Chastain’s crew to get the set of tires they’d just changed. Both proved to be dead ends, and Chastain’s crew said they would be re-using the ones they’d changed. Cobb then told her crew to buy another set of tires from the Goodyear shop, but her crew didn’t have the required credit card on hand at pit road. According to Chris Knight, two fans on Talladega Blvd. stepped in and bought her another set of tires. Radio communications indicate these tires weren’t mounted until the red flag was lifted, at which point Cobb had now lost more than five laps. Back under caution, Cobb’s truck was pushed behind the wall, where they awaited new tires near one of the track’s big screens. Two tires were changed on Lap 22, and the other two were added with an impact wrench soon after. On Lap 29, Cobb re-fired her engine and returned to action a full 19 laps down. Massey didn’t return to the race, and with just one lap separating him from Cobb, dropped to last on Lap 30.

Cobb ultimately climbed to 27th, just outside of the Bottom Five, and the last truck to finish under power. The first truck she passed was Tyler Dippel, whose #02 Lobas Productions Chevrolet wrecked on the backstretch. Finishing 30th was John Hunter Nemechek, who pushed in the nose of his #8 Plan B Sales Chevrolet, knocking him out with radiator issues. Austin Wayne Self’s #22 Go Texan Chevrolet fell out with overheating issues. Rounding out the group was Anglea Ruch, whose earlier issues with the truck jumping out of gear were compounded when she lost the engine.

Saturday’s race ended with just as much controversy. In the sprint to the finish line, race leader Johnny Sauter threw a block on Riley Herbst, causing both trucks to cross below the yellow line in the tri-oval. As both returned to the track surface, Sauter blocked the approaching high lane and took the checkered flag in first. After Sauter did donuts on the frontstretch, NASCAR officials intervened, stating that Sauter violated the “yellow-line rule” with his block. The penalty handed the victory to second-place Spencer Boyd, who was leading the high lane up to Sauter at the finish. Boyd, who was on pit road at the time, celebrated with his crew – both his first Truck Series victory in his 23rd start and the first in the eight-year history of Young’s Motorsports. Boyd ultimately had to hustle back from victory lane as his Cup ride for Sunday, the #52 Medicine Shoppe Chevrolet, was lined up first to qualify. After a delay, Boyd hopped in the car and qualified it 39th. He finished XXTH.

LASTCAR STATISTICS
*This marked the first last-place finish for the #33 in a Truck Series race at Talladega. 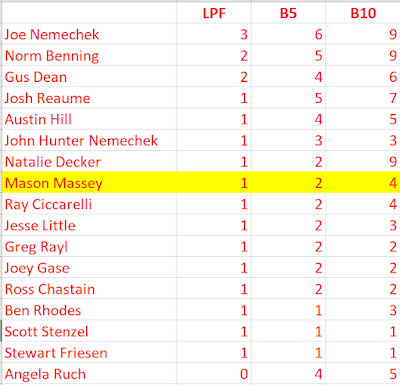