Cody McMahan picked up the 1st last-place finish of his Gander Outdoors NASCAR Truck Series career in Saturday’s Hall of Fame 200 at the Martinsville Speedway when his #0 Property Damage Appraisers, Inc. Chevrolet when he failed to complete any of the 201 laps due to engine trouble.

McMahan, a 27-year-old racer from Chilhowie, Virginia, transitioned from the X-1R Pro Cup Series to ARCA in 2013. He made his lone ARCA start at Talladega, finishing a strong 12th for team owner Wes Gonder. A subsequent entry at Pocono was withdrawn. On the Truck Series side, McMahan made his first series attempt at Bristol, where he first drove for Jennifer Jo Cobb. Unfortunately, McMahan’s #10 High Country Grizzlies Chevrolet was slowest in qualifying, joining three drivers on the DNQ list. He rebounded this past June, where he put Mark Beaver’s #1 Beaver Bail Bonds Chevrolet 31st on the grid. He finished 29th, out with crash damage.

It was a late announcement on Thursday that McMahan’s ride for Martinsville, his home track, would be Cobb’s second truck, the black #0 Chevrolet. The team hadn’t been entered since Las Vegas, where it was withdrawn, and hadn’t started a race since Mosport, where Ray Ciccarelli struggled with a stumbling engine and had to pull in early. Unfortunately, the same engine issues persisted at Martinsville as multiple reports indicated the same rough noise from its exhaust note.

Sponsorship from Property Damage Appraisers, Inc. of Bristol, Virginia came on board Thursday, and the team finished applying decals to the hood on pit road. Unfortunately, McMahan didn’t participate in either of the two practice sessions and put up the slowest lap in qualifying lap. He clocked in at just 59.051mph (32.067 seconds), a full ten seconds slower than teammate Jennifer Jo Cobb in 31st, and thirteen back of polesitter Christian Eckes. A report indicated McMahan wouldn’t even be allowed to start because the #0 truck had such bad wiring. McMahan then practiced Cobb’s #10 without notifying NASCAR of the driver change, summoning him to the NASCAR hauler.

When engines fired, McMahan’s truck still sounded rough. A picture by Mike Raphael showed the #0 pull directly into the garage area at Turn 1 before the tail end of the field had even rolled off pit road. The truck was later spotted parked with the hood up in the garage between the tractors of the Rick Ware Racing and Spire Motorsports haulers. It wasn’t until Lap 32 that NASCAR officials confirmed that McMahan was out of the race with engine trouble. McMahan tweeted that he plans on returning to the series next month at the ISM Raceway.

Cobb had an equally frustrating afternoon when she lost brake pressure, causing her to coast to a stop in the infield with a fire behind her right-front wheel. Also smoking in the garage was the #34 Levrak Chevrolet of Josh Reaume. Reaume was done for the day, and ultimately finished in 31st. Cobb returned to action at least 50 laps down to complete another 60 laps, but with 20 to go dropped an axle on the track, ending her day in 27th.

In the process, she passed three drivers collected in a Lap 123 pileup. Sam Mayer turned in an incredible run in just his second career series start, leading 33 laps and taking the win in Stage 2. His #21 Manpower Chevrolet was still among the leaders on the ensuing restart when he got booted to the high lane. Coming off Turn 2, the field went four-wide below him, and nine trucks crashed. Eliminated were Mayer, Playoff contender Brett Moffitt in the #24 CMR Construction & Roofing Chevrolet, and Tyler Dippel in the #02 Lobas Productions Chevrolet.

At the end of twelve cautions that took up nearly half the race distance, a number of drivers turned in very strong finishes.

Timmy Hill finished 5th, not only the career-best finish for him in the Truck Series but the best for he and his brother’s single-truck team. Hill gained several spots by cutting to the low lane on the Lap 123 wreck and engaged in a spirited battle inside the Top 10 for the final laps. This continues a breakout season for Hill, who on the XFINITY side finished in the Top 10 at Bristol and very nearly had a Top 5 in the July race at Daytona before a crash, all while driving for Carl Long.

John Hunter Nemechek was turned into the backstretch wall on Lap 90, taking significant damage to the front and rear of his #8 ROMCO Equipment Chevrolet. The NEMCO Motorsports crew rallied to not only keep the younger Nemechek on the lead lap but finish 7th. It was the best finish of the season for the Nemechek team, improving their previous best of 8th by Angela Ruch in the Daytona opener.

Danny Bohn’s series debut could hardly have gone better. Driving for On Point Motorsports in the #30 BMLG / Brantley Gilbert Toyota campaigned this year by Brennan Poole, Bohn worked his way into the Top 10 and finished 8th.

Jeb Burton took 9th, joining Al Niece teammate Ross Chastain in the Top 10. Burton overcame damage to the front corner of his #44 State Water Heaters / Alsco Chevrolet in a tangle on Lap 116, then an unscheduled stop in the later stages. He matched his 9th-place finish in his only other Truck Series start this season at Kentucky.

Codie Rohrbaugh finished 10th, the first top-ten finish of his Truck Series career in a season where he’d crashed out of four of his previous seven starts. He accomplished this in his first-ever series start at Martinsville.

Jordan Anderson, Dawson Cram, and Gus Dean all spent some time in the Top 10 during the late stages before they finished nose-to-tail in 12th, 13th, and 14th, respectively. Cram’s finish, which came in a truck built around the same time as "Freak" in 2000, came in his first Truck Series start of the year. His previous start came last fall at Phoenix, where he steered D.J. Copp’s #83 RGS Products / THP Chevrolet to a 16th-place finish.

With just two races to go in the season, the battle for the 2019 LASTCAR Truck Series Championship remains tight. Joe Nemechek holds fast to the lead over Norm Benning and Gus Dean by a single last-place finish. Nemechek's only path to the title at the ISM Raceway is to finish last there. If he does not, Benning can take the lead by finishing last at ISM, thanks to his 10th bottom-ten finish resulting from a late accident at Martinsville. Dean can potentially tie Nemechek at ISM, but will still trail on bottom-five finishes, meaning he must finish last at both ISM and Homestead. Josh Reaume is the only other driver mathematically in contention, though he must also finish last in both races to take the title. 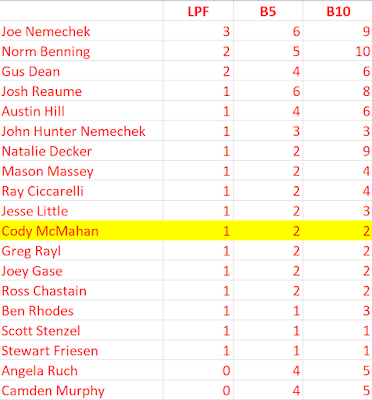